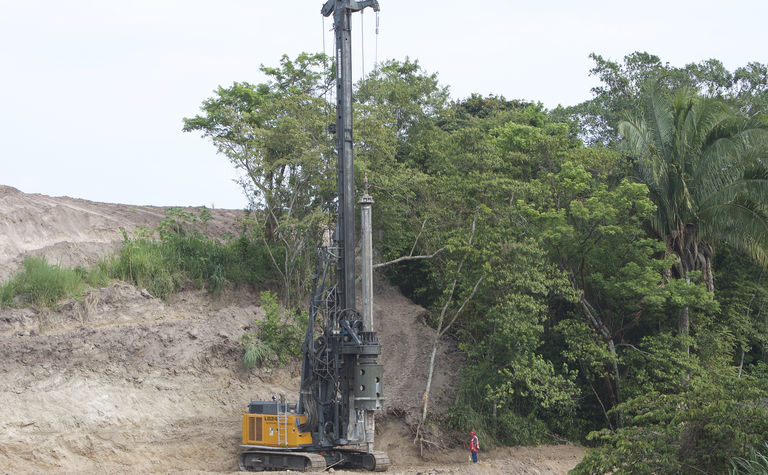 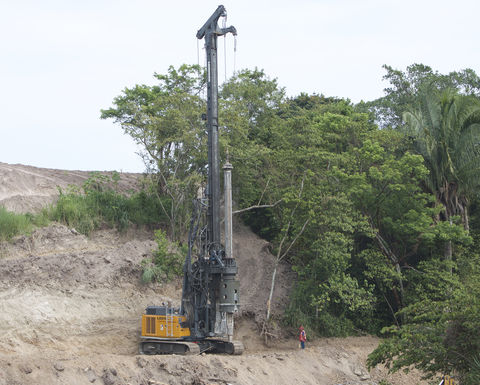 The newly formed geotechnical division of Mota-Engil Mexico is leasing a Liebherr LB 24-270 rotary drilling rig on an 18-month rental agreement from Liebherr Mexico to start its operation and to act as the prime method of pile drilling on the 129km Cardel-Poza Rica highway that the contractor is building for Mexico's transport and communications ministry.

The Liebherr LB 24-270 is designed for the installation of different foundation piles and includes kelly drilling, as well as various continuous drilling methods with double rotary head, continuous flight auger and partial or full displacement tools. The maximum drilling depth is 58m and the maximum pile diameter is 1.9m.

Mota-Engil has the option to purchase the rig, and has meanwhile purchased an oscillator from Liebherr to ease the installation of the casings for the concrete piles. The machine arrived on-site in late 2016 and is being deployed on the various structures along the highway.

Mota-Engil Mexico was founded in 2012 as the Mexican unit of Portugal's largest construction company, Mota-Engil, and operates in the transport, port, logistics and waste management sectors.

Deputy chief of foundations at Mota-Engil Mexico's geotech division is Pedro Gregorio, who had previously worked in Portugal, explains that the new division was founded last year.

"Liebherr rotary drilling rigs are not yet known in Mexico, but our company has worked extensively with them in Portugal, and when we opened the geotech division here we decided, first thing, that we would use a Liebherr rig to make a difference between ourselves and the competition," he says. "We decided on an initial rental agreement because the nature of our work means that equipment such as cranes and rigs are needed for short periods, and we generally rent rather than purchase units of this kind. This is the first occasion that a Liebherr rotary drilling rig and oscillator have been used in Mexico."

The new geotech division was formed to enable Mota-Engil to offer specialised foundation services, rather than rely on the work of subcontractors.

"Rather than subcontract on this complex length of highway construction, we decided to form our own division with our own specialist team and our own equipment. We invested in the Liebherr rig and other equipment, and with this and the experience we are now gaining, we are intending to become a fully fledged geotech division within Mota-Engil that will be able to tender for projects outside of the company's own contracts."

Mota-Engil is heading the consortium that has been awarded the Cardel-Poza Rica highway concession, with a value of MP3.47 billion (US$ 269 million). The 30-year concession covers construction and operation of a 129km stretch of highway between Laguna Verde and Gutiérrez Zamora, designed to improve connections in the coastal region of Veracruz State and to the port.

The roadway design meets the requirements for 2x2 lanes, with a central reservation, and a speed design of 110km/h. Construction began in 2016. The structural and foundations design includes 16 underpasses, 22 overpasses, 20 bridges and seven agricultural passes, with the foundations diverging according to geotechnical necessities and the superstructures resorting essentially to prefabricated units in order to meet fast construction deadlines.

Gregorio says that although the soil along the route is varied, it is mainly loose rock, especially at the river crossings where most of the bridges are being built. "This is why we purchased the oscillator," he says. "We are drilling to a maximum depth of 37m, with pile diameters of 1.5m, 1.2m and 1.0m. These loose river rocks are found to depths of 20m or 30m, and they have no cohesion. Without immediate installation of a steel casing, the hole could easily collapse. So we are drilling down while simultaneously using the oscillator to install the steel casing in 3m lengths. We could not have used bentonite or polymer fluid to stabilise the alluvium."

The geotech team is working two shifts per day. Gregorio explains that it is taking two shifts, or one day, to drill down to the full 37m depth and lift in the steel reinforcement cage, when installing a 1.5m pile. It takes a further one shift, or half a day to finish the concreting.

"All the casings are moved by the oscillator, and the machine just has to drill," he says.

"The oscillator has the strength to insert the casing and then take it out again as we are pouring in the concrete. Both the rotary drill and the oscillator are controlled by the operator from the cab. So we need just two operators, both of which were trained for us by Liebherr Mexico." 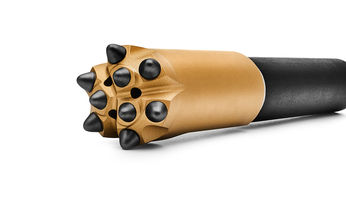 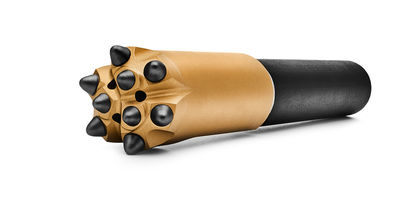