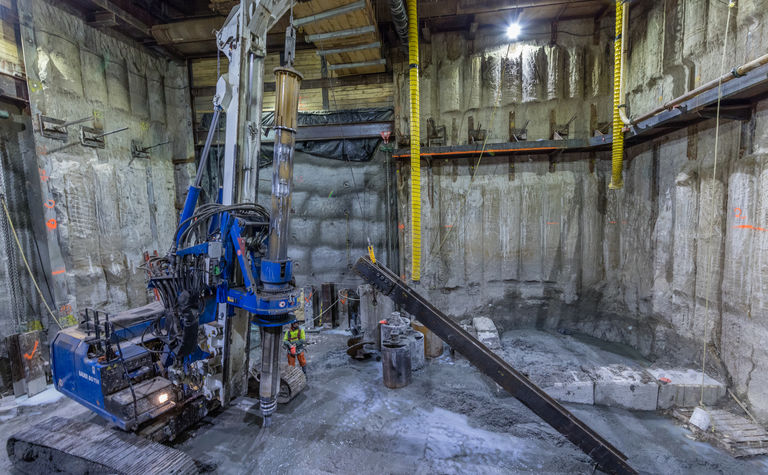 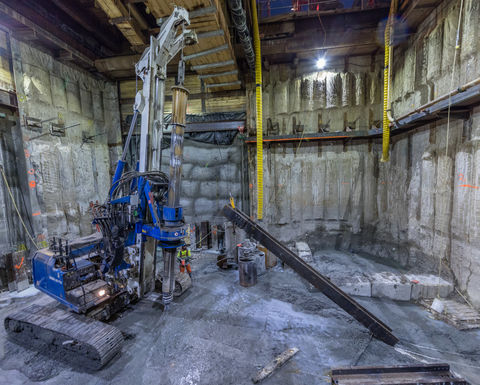 To say that Deep Foundations Contractors (Deep) was drilling in a confined space within an extraction shaft on the Eglinton Crosstown Light Rail Transit Project (Crosstown) would be an understatement. It was the first of many challenges the firm would overcome while working above and below the buzzing streets of Midtown Toronto, Canada. The epicentre of the action; however, was a 32.5m (107ft) deep extraction shaft, where two massive tunnel boring machines (TBMs) would be lifted from the ground at the end of a long subterranean journey.

While Deep has extensive experience working in Toronto, one of North America's largest cities, there is nothing simple about drilling in a crowded urban environment. The Canadian foundation contractor would have to conquer challenges, including inconsistent soil conditions, low-clearance drilling, unmovable utilities, maintaining traffic and darkened confined working spaces, in its quest to provide underground access for two rapidly advancing TBMs.

Crosstown is a C$8.4 billion (US$6.6 billion) infrastructure project with a 19km corridor, 10km of which is underground. Phase 2 includes the easternmost tunnel. Come 2021, Metrolinx projects that 5,500 passengers per hour will benefit from this project - the largest transit expansion in Toronto history.

Deep specialises in shoring for a wide cross-section of building and infrastructure projects. The contractor was a natural fit having worked on large transportation projects, the most recent of which was a subway extension for the Toronto Transit Commission. The Aecon/ACS Dragados JV awarded Deep a roughly C$21 million contract to excavate and shore launch extraction shafts for two TBMs, build two emergency exits for the TBMs, and construct head walls for two future stations. Its work started in April 2014 and concluded in March 2017.

Deep's work would allow the two TBMs, known as Don and Humber, to continue their underground journey uninterrupted. The costs associated with stopping their progress would be incredibly prohibitive; failure was not an option.

The Caterpillar TBMs - aptly named after two of Toronto's rivers - began tunnelling on September 30, 2015. The pair would crawl westbound, digging 3.5km from the launch shaft at Eglinton and Leslie Streets before reaching their destination. The TBMs would eventually be hoisted out of Extraction Shaft 3 (ES-3), which sits at Yonge and Eglinton Streets, Midtown Toronto's busiest intersection. Deep's end goal was to prepare the shaft for their arrival.

The ace Deep held in its pocket was Canada's largest fleet of Bauer drilling rigs, all of which were acquired from Equipment Corporation of America (ECA). Deep purchased the BG 55 - one of the most powerful rotary drilling rigs on the market at the time with 553kNm of torque - in September 2016. The contractor then acquired one of the smallest, a BG 11 H, in August 2017. ECA also sold Deep seven Klemm drilling rigs.

"We have the biggest fleet of Bauers in Canada," said Conor Foy, Deep's supervisor on the Crosstown. According to ECA Canada's branch manager Ray Kemppainen, Deep geared up by purchasing five more rigs from late 2015 through early 2016, including a BG 46, two BG 39s, a BG 40 and a BG 30.

In the early 2000s, Deep analysed the drilling rig manufacturing market and made a calculated decision to acquire Bauer drilling rigs starting in 2003.

ECA was instrumental in matching equipment to the complexities of the Crosstown, according to Foy. "There was a lot of back and forth," he said. "We had to provide a lot of information and work with them to get the right equipment."

The back and forth Foy refers to revolves around service, parts and training, according to Kemppainen. He added that Deep's managers were given the unique authority to order parts directly from the job site, which comes as no surprise considering the unforgiving schedule and critical need to keep the rigs drilling.

Midtown Toronto is notorious for its troublesome ground conditions. This reality sunk in as deep began drilling ES-3. The first 10m included granular and silty sands. Deep then hit the water table and encountered flowing silt, which went down 16m. A layer of dense glacial till stretched from 26-32.5m below the surface. The contractor overcame the variety of soil conditions with careful drilling techniques and an assortment of drilling buckets and tooling.

One challenge was unstable soil. "The problem when it got wet was the silty sand," Foy recalled. "It was very fluid so you had to follow proper procedures and techniques to make sure the drilling was consistent and you didn't have any cave-ins." Deep relied primarily on Bauer drilling buckets to conquer the material. Augers were used as a back-up and bailers helped to remove water.

Shaft within a shaft

Deep's decision during the tender process to tap Ontario-based Isherwood Geostructural Engineers as a shoring engineer paid off. Working with Deep, Isherwood engineered a creative solution whereby a shaft could be deepened just enough to allow the Bauer BG 11 to go below street level to install a secant wall from within. After establishing the dimensions of the rig and surveying the lowest utility supports, Deep determined that lowering the grade to 15.5m and pouring a temporary slab would allow the BG 11 H to finish off the secant wall.

Deep built ES-3 in two sections: north and south. Each presented a unique set of challenges.

The conflicting utilities in the northern half were relocatable, which allowed Deep to build a secant pile wall by drilling from the surface with one of its five Bauer BG 40 drilling rigs. Fiberglass pile sections were used on the east wall to prepare for breakthrough by the TBMs.

Deep kept traffic flowing on Eglinton Avenue by building a temporary bridge deck over the northern half once drilling was completed. It consisted of timber mats supported by steel beams and bracing, and locked in place with steel angle.

Once utilities were surveyed, located and protected with steel sheeting, Deep relocated its Bauer BG 40 to commence drilling in the southern half. It was important to compare pile and utility locations to avoid any conflicts. The challenges with confined space and drilling depths faced in the northern half remained, but all holes were completed safely and efficiently.

Supporting utilities was Deep's top priority when excavating the southern half of ES-3. The crew built a lattice of steel support beams to support the utility ducts/conduits and mains running across the shaft before commencing work on the deck. Following a rigorous inspection, this deck was opened to traffic and the north deck was removed. The north would now remain open to allow for removal of spoils, and eventually, the two TBMs.

Deep installed an internal waler and lagging design to continue shoring below the utilities, so the slab could be poured for the BG 11 H. The system, designed by Isherwood Geostructural Engineers, allowed the excavation to be lowered enough for a compact air track drill to drive soil nails. The crew worked within a confined space to install the nails and spray shotcrete in a panel sequence to keep the ground stable as excavation continued. Alternating panels allowed deep to vertically excavate up to 1.2m of material every week. External dewatering was required for the final two levels because they were below the water table.

Most secant piles were accomplished from street level, but three windows remained in the southern half where that was not an option. Closing them during the remainder of the excavation proved to be the greatest challenge of the complex ES-3 shaft construction.

The client dewatered ES-3 to lower the water table by one metre, so the working platform could be poured at the correct elevation. The equipment ran until the secant wall was finished to keep the water at bay.

One of the most interesting spectacles for passers-by was the sight of a Bauer BG 11 H dangling from the end of a crane line as it slowly descended below street level. Drilling within the cavernous ES-3 was also one of the more complex engineering challenges Deep overcame.

"You barely had room to breathe, especially inside the shaft," Foy says of the working conditions within ES-3, adding that the mast of the BG 11 H was within inches of the lowest utility support. The height from the drilling slab to the underside of the utilities was 9.8m. "You had to put in the preparation work and make sure everyone knew what they were doing and had clear procedures for what was happening."

The compact rig excelled at drilling in a confined space below unmovable utilities due to its lower header configuration, according to Kemppainen. Deep was renting the rig from ECA at the time, but converted to a purchase because it was suited for this operation.

"The BG 11 H was the only rig that could fit under the decking and utilities and still be able to drill the required depth to complete that wall," Foy adds. "This machine was dropped in 15m below ground surface, but it still had to drill holes from inside the shaft down another 17.8m."

Even though the BG 11 H was compact enough to work beneath the utilities, it was incapable of using casing to drill the remaining 17.8m-long piles. Deep needed a high-quality, water-tight secant wall to keep the shaft dry.

The contractor chose a polymer drilling fluid to keep the holes open. A liner was inserted to keep the top of the excavation open and the fluid was pumped for the remainder of the shaft. These steps, combined with dewatering, created enough head pressure to keep the flowing silt from caving in.

The slurry bubbled in the tanks at street level while being mixed and agitated. Deep regularly tested it for pH and viscosity before turning on the constant flow required during drilling.

Once the drill bit hit the founding elevation, a drilling bucket scooped out any leftover chunks of earth. It was critical for the slurry to keep the hole open and clean, while Deep's crews built sectional piles in preparation for concrete pouring.

The size of the piles forced Deep to improvise. At 18m in length and 8,400kg, they were too long to hoist in one piece and too heavy for the BG 11 H to lift.

Deep designed a hoisting device above each pile location that could lower each of the three six-metre sections to be bolted together before eventually being descended to their founding elevations. The hoist could lift three 6m sections together at a total weight of 8,400kg. Once the piles were installed to the correct elevation the concrete needed to be placed.

The concrete was placed under polymer slurry using the tremie method. The crew poured each pile with a flexible hose connected to a sectional tremie pipe fed by a pump that was positioned above the shaft. The pipe was then lowered to the bottom of each hole. As the concrete was placed, the slurry in each hole was displaced.

Deep's crews persevered 24 hours a day, six days a week to complete the 29 secant piles under a rigorous schedule. By this time the northbound TBM had already broken through. The southbound TBM and a 50-person crew were crawling quickly toward ES-3. Deep had to be out of the shaft before breakthrough.

On March 13, 2017, the lower drilling came to a successful conclusion. The project was completed successfully to the satisfaction of all parties involved, bringing the City of Toronto about 3.5km closer to increased mobility. 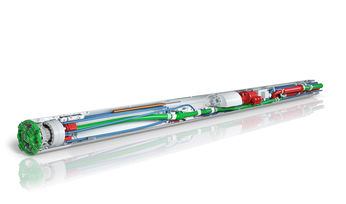 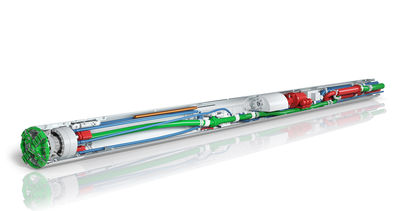