Bauer Schweiz carries out foundation work for a new research and laboratory building in Zürich, Switzerland 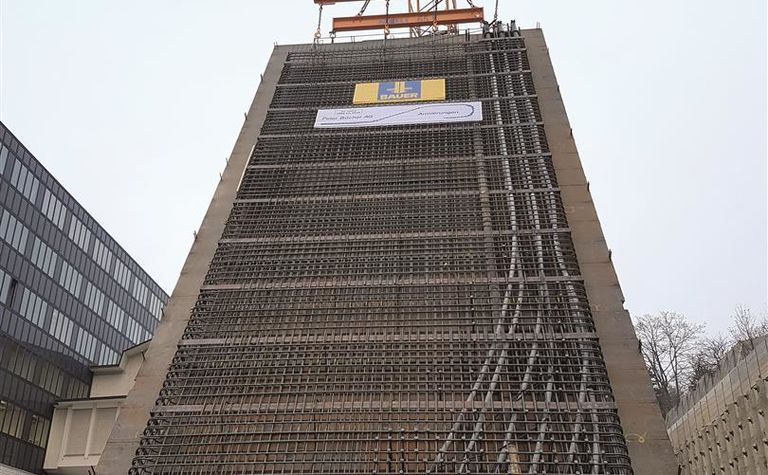 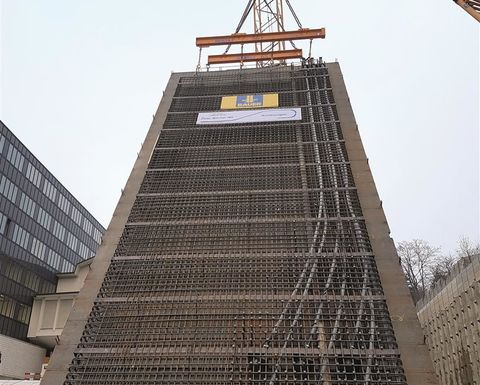 The Swiss Federal Institute of Technology Zurich, ETH Zürich for short, is building a new research and laboratory complex. The seven-floor building with around 21,000m² of floor space is planned to be operational in three years. Aside from office workplaces and seminar rooms, it will also include laboratories and catering options.

Construction began in 2015 and the foundation work, with which Bauer Spezialtiefbau Schweiz was commissioned, took place from December 2016 to March 2017. "A unique concept for stabilising the 110m-long north-eastern slope had to be developed for this," reported Bauer project manager Niklas Haag.

First, Implenia constructed a back-anchored intermittent bored pile wall to secure the slope during the foundation work. Around 800 temporary anchors were placed.

"However, to keep the slope-side terrain free of bulky and heavy stabilising elements in the future, the extreme forces needed to be absorbed by an independent supporting structure," explained Haag.

A solution was used that had previously never been achieved in those dimensions, Bauer claimed.

After excavating a 20m-deep excavation pit, the cutting work for a total of 14 diaphragm wall segments began. Using a cutter unit on a Bauer MC 96 duty-cycle crane, the Bauer job site team then drilled trenches in the rock up to 26m deep. Then, giant reinforcement cages for each of the 1m-wide and around 10m=long segments were lifted using a crane - precise work in a tight space - after all, the excavation pit was right in the centre of Zürich. A separate production platform was designed for the assembly of the 14 reinforcement cages - each weighing around 50t. Each panel was then filled with around 270m³ of concrete.

Bauer Spezialtiefbau Schweiz completed the diaphragm wall work at the end of March 2017. The 14 diaphragm walls are expected to be pre-stressed in spring 2018, and then the slope stabilisation supporting structure will be built, piece by piece. The casing of the new GLC development and laboratory building will begin in parallel with this. The pre-stressed, diaphragm walls perpendicular to the slope will make up the lower part of the protection system, which will be complemented by a non-positively connected in-situ concrete vault.

Bauer is undertaking the foundation drilling for KARL - a new office complex in Maxvorstadt, Munich 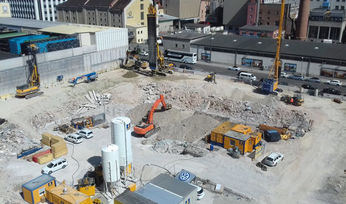 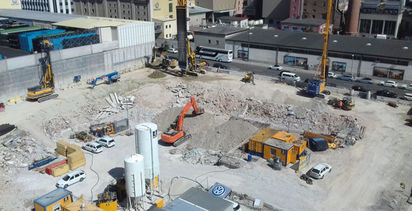