Soilmec, which specialises in the design and manufacture of drilling and foundations equipment, has produced its 5,000th large-diameter piling (LDP) rig To celebrate this milestone, Soilmec, which is part of Trevi Group, invited representatives of VolkerGround Engineering - the client that bought the 5,000th machine - to its headquarters in Italy in February. The SR-95 rig is one of the flagship models of the new Soilmec line.

Francesco Bassi, Europe sales director of Soilmec, and Mark Nelson, Soilmec (UK) director, said: "We are thrilled to be handing over the keys to the SR-95, serial number 5,000, to VolkerGround Engineering at the handover ceremony held at our factory in Cesena.

"Soilmec and its sister company, Soilmec UK, are delighted with this sale. It sees another multifunctional rig entering the UK market to enrich our existing fleet to help deliver many successful projects in the near future".

Brandon Ferreira, director of VolkerGround Engineering, commented on the machine's destination and configuration: "The rig will hopefully be starting at a project in Cardigan Bay, Wales, next month. The reason we wanted a quick configuration is it will be doing rotary and CFA piling on the same project, so the SR-95 is absolutely perfect for what we need. In regards to our London work, we are doing a lot of deep piling, so it is critical to have a rig which is capable of doing the work. The dual-purpose element of the rig means that we can use it in different ways as well."

Simone Trevisani, CEO of Soilmec, also announced during the ceremony: "While we celebrate with satisfaction the goal of the 5,000th rig, that adds to 1,500 machines for microdrilling and to 550 cranes, we are already driven to the development of new and more and more forward-looking technologies." 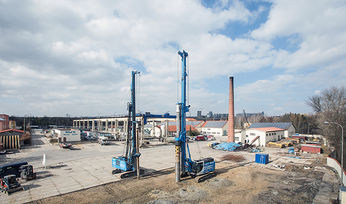 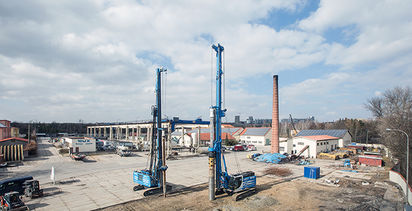