Fast and highly efficient, hydraulic rotary drilling has been used for a broad range of applications for more than a century. However, says Signe Hansen, changing demands are continuously contributing to the development of new technology Boart Longyear, a leading service provider, explains how the end of the mining downturn and increased safety and environmental concerns are currently affecting the industry.

"During the mining downturn, operating mines were cautiously spending and holding back on water management and development projects to save money. Now, those projects are necessary to complete in order for the mine to continue to develop."

Inherent to all new demands within the industry is, she says, an increasing focus on both environmental impact and safety with mines demanding more environmentally friendly and safer work practices, policies, equipment, and procedures.

Fast and cost-efficient, mud rotary is still the most widely used and versatile drilling method for a wide range of applications such as environmental investigation, geotechnical explorations, mineral sampling, deep well installation and more. The method does, however, have some environmental drawbacks; it requires large amounts of water and can produce a high level of waste. Hence, new technologies are taken into use to minimise the drill site's environmental impact.

One of the methods increasing in use is dual tube flooded reverse (DTFR) drilling. "Using DTFR, fluids always circulate inside the dual tube pipe and cannot escape into the formation - lowering the environmental impact. Instead of maintaining fluids at the surface and circulating throughout the wellbore, DTFR generally drills with the borehole fluids at their naturally occurring level," explains Van Aacken. "This means DTFR can be used on large rotary drilling projects for production, dewatering, re-injection, geothermal, and municipal wells requiring a low environmental impact." When it comes to the safety of rotary drill sites, an essential component is to have an efficient monitoring and reporting system in place, and to that purpose utilising the possibilities of new technology is invaluable. Over the past several years, Boart Longyear has been working on an operating rhythm with embedded safety measures. Regardless of whether a drill site is in Laos, Australia, or Africa, the operating rhythm is the same, says Van Aacken. "Each component of safety is recorded, tracked and monitored in our safety information management database. The safety steps are part of every day. This is the new normal, and it is what new-hire employees see their very first day on the job."

As part of this process, the company is replacing all paper reports with a tablet in the hands of drillers. "Today, more than ever before, drill crews in the field and management back in the office have better near-miss and critical-risk reporting because the report is instant and easy to run, view, and analyse, even on a tablet," stresses Van Aacken.

Recently, Boart Longyear's VP of operations, Terry Kirkey, and EHS global director, Brian Maeck, visited a large rotary rig in Nevada. While observing the breakout process, the two identified a potential risk to the driller and completed a management interaction corrective action, on a tablet, in the field.

The large rotary breakout process and tooling had been used for decades, but applying new scrutiny to the process, it was identified that while a hydraulic cylinder pulled the table wrench and breakout wrench together, an immense amount of pressure was applied. If there were to be a wrench connection component failure, the pressure would release and potentially strike the driller.

As a first response to the issue, Kirkey created a management interaction, and then assigned a corrective action through the company's GEMS app (an app that syncs with Boart Longyear's safety database). The interaction was logged in the system for reporting requirements and facilitating follow-up and close out.

It was concluded that to remove the risk, it was necessary for the driller to be removed from the potential line of fire. Operations manager, Scott Krug and the engineering team designed and added hydraulic lines to the cylinder and a bypass valve on a separate stand to string away from the drill controls. Once an effective control was developed, it was shared globally within Boart Longyear.

Employing a sharp rotating drill bit to push through the subsurface, rotary drilling has been in use for millenniums. However, the first mechanically powered, hydraulic rotary drilling equipment was invented in the US in the late 19th century. Back then the hydraulic rotary drills used water to circulate the drill cuttings up and out of the borehole but, in 1901, drillers discovered the benefits of adding mud to the water to stabilise the wall of the borehole. The LRTM500 is equipped with a fully hands-free rod handler. This technology allows making or breaking rods when tripping in or out, a substantial safety feature that removes drillers and driller assistants away from the hazards of rod handling

Conventional mud rotary is still the most widely used and versatile drilling method for a wide range of applications. One of the advantages of mud rotary is that it eliminates the need for a drive casing making it both fast and cost-efficient, especially in unconsolidated, alluvial and loose geological formation. Consisting of water, often mixed with clay additives such as bentonite or polymer, the drilling fluid (mud) also works to cool the drill bit and this, together with the stabilised borehole wall, enables rigs to drill up to several thousand feet per day and create hole diameters of more than 48in.

Generally, air rotary is the better alternative for well installation, geotechnical boreholes, and mineral sampling in hard rock conditions. The method uses air instead of fluid to circulate the cuttings to a cyclone at the surface. One of the advantages of the method is that it does not cause infiltration of drilling fluids into the formation. However, when drilling in areas with high water tables, air rotary requires a large volume of air in order to lift both the sample and the water and this creates the need for large compressors or boosters. Hence, while air rotary is less reliant on an existing water source and has a smaller environmental impact in the form of investigation waste, its total environmental impact depends on the environment and ground conditions.

Reverse-circulation delivers rotational and impact energy in the same manner as direct air rotary, but uses a dual wall drill rod consisting of an outer and inner tube. The inner tube allows the drill cuttings to be transported back to the surface in a continuous flow achieved through blowing air between the inner and outer tube. It offers a fast and cost-efficient method for collecting literally uncontaminated rock and mineral sample.

Dual rotary can be the optimal choice when drilling in unconsolidated formations like sand, gravel, and boulders. With dual rotary, the rotary head has its own feed system and raises and lowers independently of the lower drive which advances casing as needed. The casing can be advanced ahead of the drill bit to minimise aquifer cross contamination, loss circulation, and eliminate borehole stability problems.

DTFR utilises a unique drilling process that uses dual wall drill pipe and drilling fluid along with the injection of air in order to rotary drill large diameter holes. In the drill string, perforations allow the air to return up the centre, following the path of least resistance. The air travelling back up the inner tube creates a vacuum, which in turn sucks up the cuttings from the bottom of the hole at the face of the bit.

Spinning right out of the pandemic 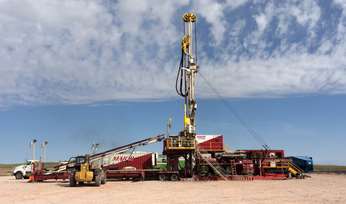 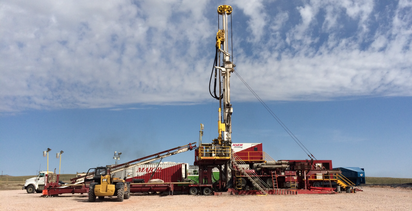