Nancy Argyle revisits the story of a sonic drilling programme looking for buried treasure which has on the History Channel's “The Curse of Oak Island” TV show. 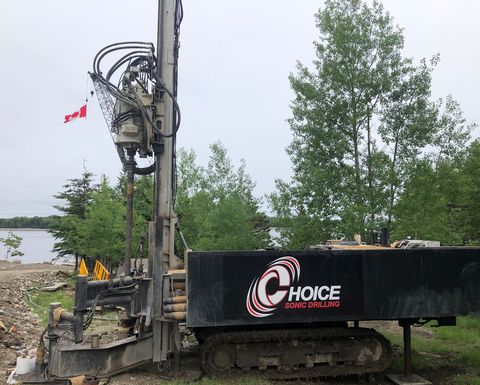 In the fall of 2019, as season seven of The Curse of Oak Island began airing its latest episodes on TV, viewers were treated to the sight of Brennan McMahon and the team from Choice Sonic Drilling - back on the island and, once again, front and centre in the hunt for buried treasure or, as it turned out, buried flood tunnels.

In the season's opening episode, the sonic drill team was shown perched on a barge over the fabled island's swamp which has held intense interest for some, with many wondering if a Spanish galleon ship might be submerged there. Certainly, according to the ongoing investigation, there does appear to be something strange in the swamp and the sonic drill, with its ability to core through wet, sandy silty material could not be a better choice for the task.

"From our latest drilling efforts, we did find evidence of how the swamp was created which backed-up other aspects of the investigation," notes McMahon. "Although we didn't find a ship, we helped prove that the swamp was much younger than the island itself and might even be man-made… more evidence to support the legend of buried treasure."

In each additional episode so far, sonic drilling has continued to play a major role as the investigation team moves from one location and target to another. At each site, the core samples have often produced wood at certain depths with many believing that the drill was hitting the so-called flood tunnels which, if theories are correct, will lead directly to the money pit.

Originally, the flood tunnels were built to act as bobby-traps to prevent treasure hunters from ever reaching the gold and, although the money pit's location used to be known, it no longer is. One of the easiest ways to relocate the money pit is to find a flood tunnel that will lead to it and that is where the sonic drill comes in.

"Sonic drilling technology does a really good job of buzzing through large chunks of wood… we've easily gone through stacked timbers," says McMahon. "Even foreign objects are no match for the sonic but they are a big challenge for any other type of drill."

So, if you are a driller, what can you expect to find below ground on Oak Island? "It's a combination of wood, rock, hard boulders and old drilling voids," McMahon says. "These conditions make it much harder to get a good core sample because you have a very disturbed formation after years of so much drilling.

"Plus, you're always hitting saturated and non-saturated ground, depending on depth, and, then, after 100ft, you always into saturated soils," he adds.

Fortunately, the sonic drill has performed exceedingly well -- keeping a straight hole and providing the best core samples with the precision needed for investigators.

"We proved out a lot of guesses, which was valuable to the search," says McMahon. "There's a lot of native and non-native objects on Oak Island and the sonic is doing a great job of getting accurate samples in harsh conditions."

Choice Sonic Drilling uses the original award-winning sonic drilling technology, first developed and patented by Canadian engineer Ray Roussy, president of the Sonic Drill Corporation (SDC). In fact, Brennan used to be an employee of the company before moving to Ontario to start his business a number of years ago.

Back then, McMahon says that he knew he could count on the performance and reliability of the SDC sonic rigs, but he never expected to become a treasure hunter with them.

In response, Roussy says that nothing surprises him anymore when it comes to the sonic drill. After winning four awards, his patented technology is in use across six continents and in every application imaginable - from exploring for mineral deposits to working on sensitive projects like dam remediation or drilling large geothermal installations - and, of course, searching for buried treasure.

Digging for buried treasure - with a sonic drill 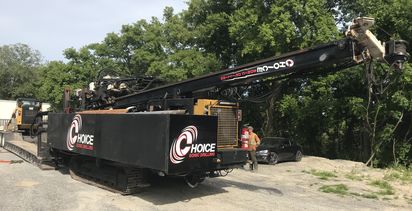