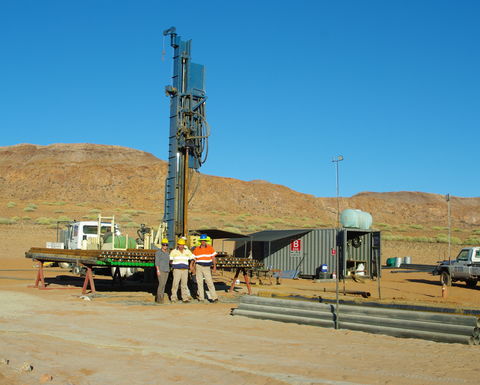 Torque Africa is a long-time Mincon customer, which has extensive experience in deep-hole reverse-circulation (RC) drilling. Between 10 and 15 February, 2020, Torque Africa began setting up a site for exploration drilling at a remote green-field site in the Northern Cape province of South Africa.

With the nearest town more than 120km away - along drifting dirt roads - it is no small undertaking to set up camp in the middle of nowhere.

Nardus Bezuidenhout, director of Torque Africa Exploration, moved onto the site with one of his company's Thor 8000 RC truck-mount drill rigs - a proven powerhouse for his chosen method of deep-hole drilling. Joining the main rig on site were a fleet of support vehicles, including rod carrier trucks, compressors, water and fuel tankers, and medical service vehicles - as well as a full team of staff to support the operation.

Even with extensive planning and logistics, fuel and water are precious resources that cannot be wasted. As the old adage goes, time is money, and the longer those resources are on site, the higher the total cost of the project. When drilling exploration holes to 1,000m or more, it is not uncommon to be on site for up to three months. That is a lot of time, money, and careful management of scarce resources.

This estimated drilling timeline is based on using diamond coring systems - known for their reliability in deep-hole drilling, albeit at a great cost. Additionally, diamond coring requires the use of expensive muds for stabilising the hole during drilling. When encountering underground cavities these muds are then wasted, and when encountering aquifers, the muds can potentially contaminate a supply of drinking water.

However, for this project Torque Africa elected to use the latest products in the Mincon MR range of exploration tools. These reverse-circulation tools use a variation of the familiar air-powered down-the-hole (DTH) hammer, but are designed to flush cuttings through an inner tube.

Until recently, such air-powered RC systems were only used for exploration drilling up to 500 or 600m - but changes to Mincon's newest RC hammers meant that Bezuidenhout and his team could expect reliable performance to drill much deeper.

Drilling commenced on the afternoon of 17 February 2020, using a Mincon MR120 RC hammer and a 143mm drill bit. Slow, methodical progress was made to ensure everything was safe and functioning as intended. After reaching a depth of 114m the team retrieved the drill string from the hole, after which the first 4m of the hole was reamed and widened to install a temporary casing. This was done to stabilise the soft ground near the surface, thus preventing hole collapse.

"When we chose drill string components, we opted for Mincon's bits with PCD carbides. Since we were drilling into granite we wanted extreme durability and reduced downtime associated with bit changes or bit sharpening," explained Bezuidenhout.

Over the next four days, drilling operations took place during daylight hours. Average progress was approximately 120m per day, which included retrieving the drill string at 637m in order to change sample tubes and swapping to a new, 137mm RC drill bit - both being wear components. 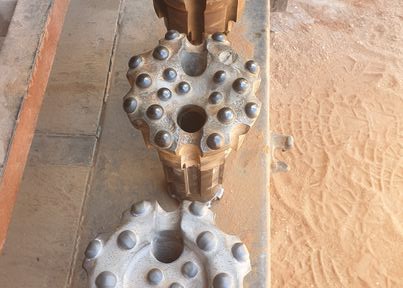 The process of retrieving a drill string is straightforward, but time-consuming. After lifting each pipe out of the hole, it needs to be unscrewed, removed, and the remaining pipes reattached. This is repeated, 6m at a time, for the entire length of the drill string - more than 600m at this point.

Deep-hole drilling projects can become incredibly expensive if multiple drill-string retrievals are required, but this can be offset by using durable, reliable equipment that consistently delivers high levels of performance. The Mincon MR120 hammer used for this project offered exactly that.

As part of the newest generation of Mincon hammers, the MR120 incorporates changes informed by decades of customer feedback.

Thanks to Mincon's engineering processes it is possible to quickly respond to customer needs and improve products based on real-world experiences. Additionally, all Mincon products are manufactured at its own factories, which includes full control of its proprietary, in-house heat-treatment processes that ensure all products are of the highest quality.

"It's clear that Mincon's engineers have listened to drillers and designed a product that has major benefits for deep-hole RC drilling, without the higher cost of alternative approaches," notes Bezuidenhout.

On day eight of the project, Torque Africa Exploration resumed drilling with the fresh 137mm drill bit - only the third bit required for the project. In order to reduce time on site, a decision was also made to move to a 24-hour drilling schedule.

Rapid progress was made: in just two days the team powered through 382m of hard granite and rushing groundwater to reach a depth of 1,019m and making this one of the deepest exploration holes drilled using air RC tools, putting the technology on par with diamond coring as a solution for deep-hole drilling.

With the target depth reached, the drill string was retrieved for its final inspection, which showed only expected wear and no failures.

Once retrieved, a post-drilling survey was conducted to verify the depth and straightness of the shaft, with the survey report indicating a hole deviation of only 0.83 degrees. This exceeds the performance of competing technologies and proves yet another benefit of air RC systems.

A record-depth hole drilled in record time would be a pointless achievement if sample cuttings were unusable, though. Fortunately, this is where the air RC approach has yet another advantage: consistently returning uncontaminated sample cuttings to the surface. This is due to cuttings being flushed up through a sample tube rather than being exposed to the drilled hole.

Bezuidenhout noted that samples continued to be collected even after encountering extensive groundwater at 886m. For every metre drilled, a sample was collected, bagged, and tagged, allowing geologists to analyse the ground conditions and mineral content.

With this remarkable achievement, Mincon believes that air RC systems are now a strong alternative to coring-based exploration solutions. The hole drilled by Torque Africa Exploration proves that it is possible for air RC systems to drill past 1,000m while collecting samples, using significantly less time, resources, and money.

Double safety record for Rosond in South Africa at Kumba 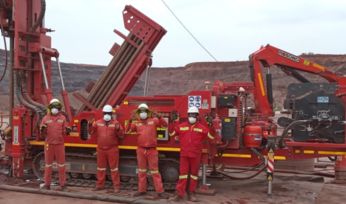 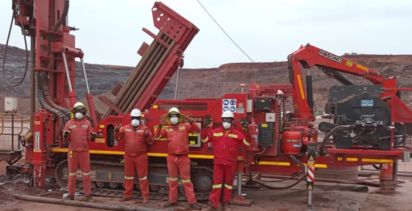