Writing on behalf of Boart Longyear, Andrew Cuthbert provides GDI with a look back at some of the company’s more interesting historical projects. Drilling has many purposes and the name Boart Longyear is often tied to drilling for core samples in mineral exploration, dewatering for groundwater control, and water well drilling for municipal and industrial applications. The company has been all about drilling since its beginnings in 1890, when founder Edmund J. (E.J.) Longyear sank his first diamond drill hole on the Minnesota Mesabi Iron Range in the midwestern United States.

What many people may not know is that the drillers and engineers of Boart Longyear have been involved in some exciting historical drilling projects in a variety of other applications, too. Drilling equipment for moon exploration is one such example; but closer to home, the company has assisted with projects to explore and define foundation and structural integrity below the earth or even under bodies of water.

In the late 1920s, members of the Longyear team were contracted to test drill the route of a proposed vehicular tunnel under the East River to connect Manhattan to Brooklyn in New York, USA. The tunnel was intended to reduce transportation congestion due to the slow and unreliable ferry service that existed at the time. The Longyear company provided preliminary boring samples used to determine what was beneath the surface of the river.

Characterising the samples' type of rock and its hardness allowed geologists and engineers to determine what equipment should be used for tunnelling, how long it should take, and at what cost. Although the initial tunnel project did not receive support and funding, it laid the groundwork for a later project—the Brooklyn-Battery Tunnel—which was started in 1940 and opened in May of 1950.

Boring for foundation samples for the Golden Gate Bridge

A similar challenge of traversing a wide body of water required assistance from the Longyear team in 1929. Joseph B Strauss, a visionary engineer, was tasked with his team to design the proposed Golden Gate Bridge in San Francisco, California. As chief engineer, Strauss requested the services of Longyear to investigate the rock formations beneath the San Francisco Bay where the bridge would be constructed. Longyear started boring in the Bay in November 1929 along the sites of the proposed piers and anchorages. Due to the turbulent waters of the channel, the drillers had to be creative as to how they would retrieve the core samples beneath the tumultuous surface. Strauss was big on safety, requiring bridge workers to use safety lines, work over safety nets, and even wear some of the first hard hats. The Longyear crew constructed a platform over the water supported by a boom—an A-frame—and guy-wires anchored to the shore. The platform allowed the team to suspend its drilling equipment securely on top and safely above the bay. Despite the problems of deep water, ocean traffic, storms, and tidal movement, the team was able to finish the work on schedule with complete core sample recovery.

The geological samples and subsequent data supplied to Strauss proved that the rock formations could bear the weight of the foundations and enable the huge bridge structure to be built. The information was provided in a full report to the board of engineers in February 1930 and the bridge was determined to be "feasible economically and structurally".

This great news meant Strauss and his design team could move on to the next phases of engineering and constructing the Golden Gate Bridge.

In gratitude for Longyear's contribution, Strauss wrote: "The work done by your company, having been entirely satisfactory, and the relations between us and your drillers having been cordial and pleasant, I am glad to make immediate payment of the balance due."

Payments received by the company totalled close to US$15,000 for the boring contract. It was not for another three years (January 1933) that construction began and a groundbreaking ceremony for the bridge was held. The Golden Gate Bridge was completed in May 1937 at a total cost of US$35,500,000.

Shortly after the Golden Gate boring project, the Longyear company became involved with drilling projects for the construction of hydro dams around the country. In the 1930s, Longyear drillers did test borings for several of the 20 planned dams under the jurisdiction of the Tennessee Valley Authority. These dams were part of a comprehensive plan for the reclamation and development of the Tennessee River—covering an area of more than 40,000 square miles and over seven states.

Today, Boart Longyear continues to assist with construction and rehabilitation projects around the world using even more advanced technologies and equipment. The company regularly uses sonic drilling technologies which are ideal for avoiding many of the challenges experienced with conventional drilling methods.

Sonic drilling offers quality control in conjunction with the production and installation of geotechnical construction elements. The sonic method can actually eliminate the need for circulation-type drilling allowing the driller to work safely in situations that involve sensitive structures, vulnerable site conditions, difficult geology, or have restrictive conditions. Sonic drilling also provides measurements and samples to evaluate actual conditions across a given site during the progress of exploration and construction.

Bridges, tunnels, dams, and even buildings are all safer because of the work done to investigate, test, and secure the foundations. Although considered a small contribution to these engineering marvels, Boart Longyear employees are proud of the heritage the company has earned and its involvement in each part of history.

A few examples of Boart Longyear's sonic drilling assistance with tunnel, bridge, and hydro dam projects in the twenty-first century include:

Webuild part of JV set to deliver A303 upgrade past Stonehenge 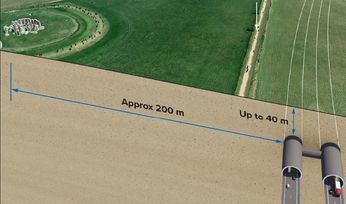