Cheshire West and Chester Council (CWACC) councillors have unanimously approved the British Geological Survey’s (BGS) planning application to site a UK Geoenergy Observatory at Ince Marshes in the north of the county. The decision will see 50 boreholes drilled down to 1,200m around a 12 km2 area, enabling scientists to gain the clearest picture yet of the underground environment.

The boreholes will be installed with some £2.5 million (US$3.1 million) worth of scientific sensors, which will observe in unprecedented detail how the underground system works. The sensors will generate millions of terabytes of data on the chemical, physical and biological properties of the rocks over a 15-year period, providing the nation with the knowledge it needs to unlock new clean, green, low-carbon energy technologies.

The UK's main funder in environmental science, the Natural Environment Research Council (NERC), has commissioned the £31 million (US$39 million) UK Geoenergy Observatories to keep the UK at the cutting edge of geoscience and energy innovation and to provide the important knowledge needed to move the UK towards a low-carbon economy.

The BGS, the UK's principal provider of impartial geological evidence since 1835, will operate the observatories on behalf of the whole of the UK and the geoscience community.

Professor Mike Stephenson, chief scientist at the BGS, explained: "More and more of the solutions to decarbonising our energy supply will need to come from beneath our feet. Ensuring we take forward these solutions in a sustainable way means understanding more about the system. Second-by-second, minute-by-minute, day-by-day, we'll be measuring the pulse of the Earth in a way that the scientific community simply hasn't been able to do until now.

"The UK Geoenergy Observatory in Cheshire will be a world-first in its ability to observe the underground environment so closely and consistently. What we learn in Cheshire should provide a breakthrough in our understanding of how the whole underground system works."

The study will involve the drilling of 50 boreholes from between 50 and 1,200m deep across the 12km2 study area. They will contain a network of 1,800 seismic sensors and 5km of fibre-optic cable that can measure earth tremors 1,000 times weaker than can be felt by humans. They will allow thousands of water samples to be taken over the next 15 years from between 50 and 400m below the surface. Some 8km of borehole drilling will generate 3,000m of rock core, which will be taken back to the BGS's national core scanning facility for laboratory analysis. All the data will be made free and open via a publicly owned website.

The UK Geoenergy Observatory at Ince Marshes will make Cheshire home to the best-characterised rock mass in the world, providing a world-class environmental baseline for the geological environment.

The Cheshire site will be one of two observatories in the UK. The other is being drilled in Glasgow and comprises 12 boreholes over a 4km2 area. The Glasgow observatory will allow the UK's earth science community to probe whether warm water within the UK's disused mine workings can generate a geothermal heat source that could become a sustainable part of the energy mix. Work has already begun on the Glasgow Geoenergy Observatory

NERC executive chair, Professor Duncan Wingham, said: "NERC's investments will equip the UK with a unique capability to investigate geological processes at depth. It will enable world-leading research, which will ensure that the best possible geological evidence is available to underpin decisions and regulatory controls around the management of the environment and its natural resources, as government, industry, regulators and academia look at how the underground might be used to power the future."

NERC consulted with the UK geoscience community in 2015 to determine what new evidence would be required. Professor of geological engineering at the University of Strathclyde, Professor Zoe Shipton, chaired the group of independent scientists who worked with NERC to write the research agenda for the UK Geoenergy Observatories.

Shipton said: "Delivering the science depends on learning from research in a location typical of the demands people put on their environment. The UK Geoenergy Observatories will enable scientists to answer a range of geoscience questions relating to techniques such as storing carbon, utilising rocks as a battery store for solar, wind and tidal energy, geothermal energy, and shale gas. The observatories will build up a really good picture of natural conditions in a variety of rock types and how they respond to change and apply this new understanding throughout the UK."

The £31 million investment is part of the UK Government's £6 billion ‘Plan for Growth in Science and Innovation'. The UK Geoenergy Observatories will help to ensure that the UK continues to lead the world in research, innovation, regulation and engineering in geoscience.

Subsurface characterisation at the UK Geoenergy Observatory in Cheshire 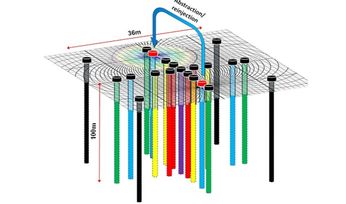 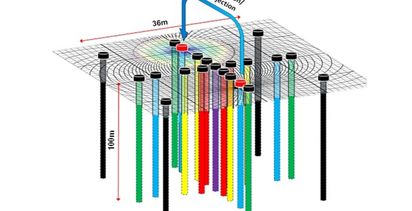