While the use of mud cleaning systems is commonplace in the oil and gas drilling industry it has been largely overlooked in other sectors. However, GDI talks to GeoTech Developments a company that has seen the proven the benefits of dewatering in geothermal drilling projects. 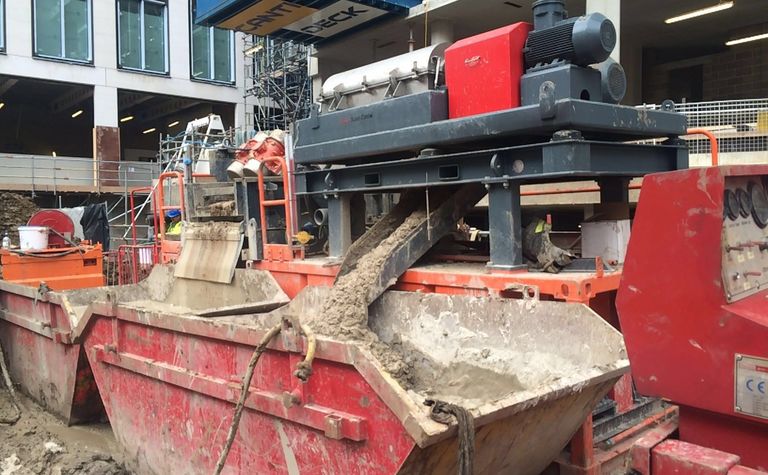 Mud cleaning or dewatering systems are not a new technology to the drilling industry, they have been in widespread use in the oil and gas sector for many years. However, the initial cost of incorporating such a system into a plant set-up appears to be putting many other drilling operations off. Yet in the UK GeoTech Developments are reaping the benefits of being an early adopter in the field of geothermal drilling.

Maurice Bosch, managing director, explains what led GeoTech Developments to become the first geothermal drilling specialist in the UK to adapt mud cleaning technology from the oil and gas sector. "If you're working in a field in the countryside you can easily discharge your water, but we were doing a lot of work in Central London and that's when we ran into a problem on a job in south London about eight years ago. We were working alongside other drilling companies and our job was less than 20 per cent of the project, drilling inside buildings. At that time a lot of drillers in London would simply pump the dirty water down a drain and in this case that led to a blocked drain and a £30,000 cleaning operation.

"We knew it was only ever going to get worse and we are actually doing it wrong. We made our move before anyone else."

The move made by Maurice Bosch and the team at GeoTech was renting a Mud Puppy dewatering system with a view to purchasing at a later stage. "The Mud Puppy is a very good piece of kit, but it is not really suitable for the very fine mud that results from drilling in the silt found in London," says Maurice Bosch. "Despite the fact that everyone was using them for mud separation they weren't good enough. We needed to be able to keep the water as clean as possible because more and more of our clients wanted us to install double loops rather than the traditional single-loop systems. A double loop increases the buoyancy and we had to get the loops in and pushing them through dirty water is difficult. The more sediment there is in the water you're using for drilling the harder it is to push the loops through."

Acknowledging that a Mud Puppy was not suitable for the work the business was undertaking Bosch began to look at alternatives aided by his sons Alex and Nicholas.

Nicholas takes up the story: "We had to educate ourselves before we began to invest in equipment. Our initial purchase was a separation system without a centrifuge. It only had shakers and hydrocyclones. We thought that was a good start because the centrifuge is the real expense."

The initial system acquired by GeoTech was supplied by GN Solids Control and that filtered solids out down to 20 microns in size. However, as Nicholas Bosch explains, "that wasn't enough and you also get a miss rate with a hydrocyclone of about 20 per cent. As you're recycling that continues to add up and means you still have a ‘soupy' liquid."

The next step in the development of a mud separation system suitable for geothermal drilling was the addition of a centrifuge. "After we had done the first few boreholes, we knew we still need to get the water cleaner and at that point, we ordered a centrifuge."

Understanding how to incorporate a centrifuge into the existing set-up saw Nicholas Bosch working closely with GN Solids Control developing the equipment specifically for geothermal drilling as well as other R&D projects. This collaboration led to Nicholas taken on the GN Solids dealership for Europe. 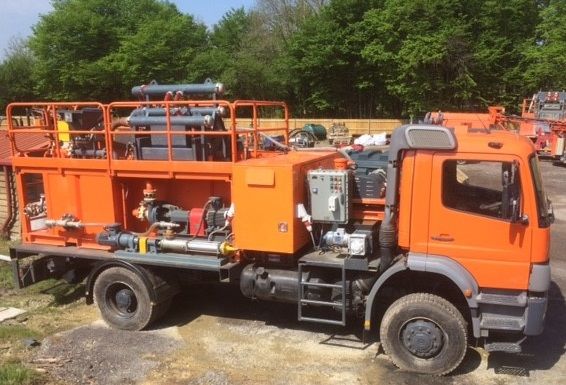 Realising just how beneficial the system they had created was the Bosch family mobilised the dewatering system by mounting it on the back of an 18t truck. "We were taking it to every job, but the problem was the system was only big enough to support one drill rig and we were getting more and more jobs that needed multiple drill rigs," says Nicholas Bosch.

Maurice continues adding: "It got to the stage where we were having to stagger the drilling on a site to be able to support the number of rigs in use. We knew then we needed to get another system. We went for a complete package from GN Solids Control with three stages of cleaning with a bigger centrifuge with more capacity."

That second system was ordered after two years using the original set-up gaining an understanding of what was needed and how to get the maximum benefits. While the first dewater arrangement was built by the Bosch family from separate components the second was complete package supplied in a single shipping container. It too was affixed to the back of a truck, which has additional benefits for the company.

"The lorries are registered as special vehicles because they are classed as mobile plant equipment, and in the UK that means lower tax or MoT. It means we save a lot of money," adds Maurice Bosch.

Such has been the benefit to the business and the rate at which it can drill a borehole that a third even larger dewatering system has now been added to the fleet.

Explaining how the dewatering happens, Nicholas says: "All our systems start by dropping the mud onto a primary shaker, which has adjustable screen sizes. We usually run a 1,000-micron screen (1mm). Around 70 per cent of the solids are taken out in that first stage. Those solids go straight into a skip straight for disposal.

"Anything less than 1,000 microns drops through to the tank below the shaker. A pump then takes that dirty water to the first set of hydrocyclones - the desanders. They take out anything between 1,000 and 100 microns. Those hydrocyclones sit above a second shaker which dries anything that comes out of them ready to go into a second skip.

"The next stage sees anything that has dropped through that shaker go through another smaller hydrocyclone, this time a desilter taking out solids down to about 20 microns.

"The final step is the water is pumped into a 14in centrifuge [on the large unit] that can handle 45m3 per hour."

The latest and largest dewatering unit operated by GeoTech Developments can deal with 1,000L per minute of mud per rig and it has been running supporting three rigs at the same time with Nicholas confident it would be able to support five rigs. 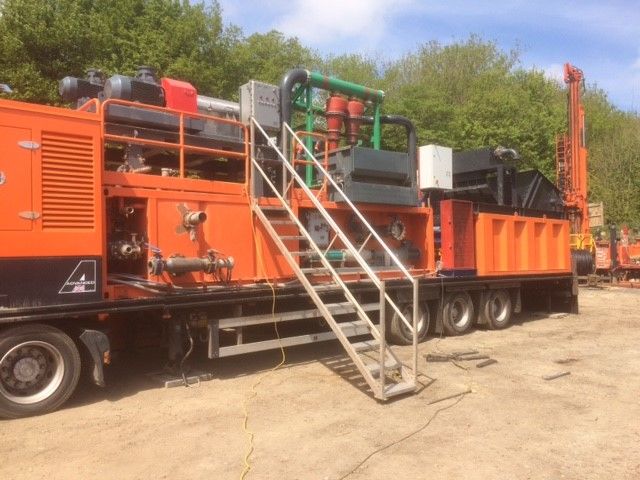 Due to its size, it is mounted on a 44t articulated trailer, the largest mud cleaning system is only used on about 50 per cent of the drilling jobs done by GeoTech. However, that does not mean it remains idle as it is also used for anaerobic digestive cleaning jobs. Because anaerobic waste tanks can get massive build-ups of debris in them (up to 1,500m3 in a 25m diameter solids tank) GeoTech jet it out with high-pressure water, liquify it and pump it back as they would with a spud box if they were drilling.

However, for GeoTech Developments the real benefit of the mud cleaning systems it operates is the advantage it brings in terms of the speed at which it can drill. "In London clay, we can drill at 60/ 70m per hour for a 5in borehole, which is around double the speed," notes Maurice Bosch.

He goes on to explain that without mud cleaning equipment to achieve the same number of metres drilled would need an extra rig. And yet despite this, "no one else appears to understand the benefits or they are not prepared to make the initial investment. We see it as important as having drill rods. If we're not going out with that [the dewatering system] we're not drilling.

"It has enabled us to be more competitive in our tendering process because of a huge reduction in the removal of waste drilling fluids. I could not imagine working without it now"

The largest projects Geotech Developments has undertaken with its dewatering equipment was the drilling of the geothermal boreholes on the site of AstraZeneca's new laboratory complex at the Cambridge Biomedical Campus. At one of the largest geothermal borehole projects in the UK, Geotech Developments was required to drill 176 boreholes to a depth of 200m incorporating 40mm loops.

A key stipulation in the tender document was zero discharge. This put Geotech at the forefront of the bidding contractors simply because of its use of advanced mud cleaning equipment.

Not only is there a savings factor for liquid disposal, but the equipment used also enabled Geotech Developments to drill at a much higher rate than the industry is currently used to seeing, and with much less wear and tear on both their equipment and its employees.

Thanks to the mud cleaning system, Geotech drilled and installed a minimum of one 200m hole per day with just a single drill rig and on several days two 200m boreholes where achieved, enabling them to complete the job in record time and ahead of the schedule set by Skanska, the main contractor.

"The Biomedical Campus is a major UK building project and delivering the project efficiently and timely is key to the way Skanska operates," said Sean Carter, project environmental advisor, Skanska. "Geotech Developments exceeded our expectations, not only in speed and efficiency but its use of technology met the very strict wastewater regulations that we adhere to. Over 2.5 million litres of grey water was recycled during the drilling process, helping Skanska gain green awards for this project." 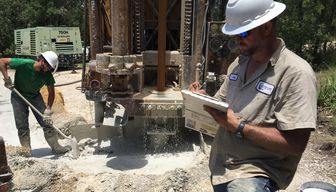 Water well drilling - some insights from around the world