The Eden Project, in Cornwall, England, and EGS Energy Ltd have announced that funding has been secured to drill the first well for their pioneering geothermal heat and power project. 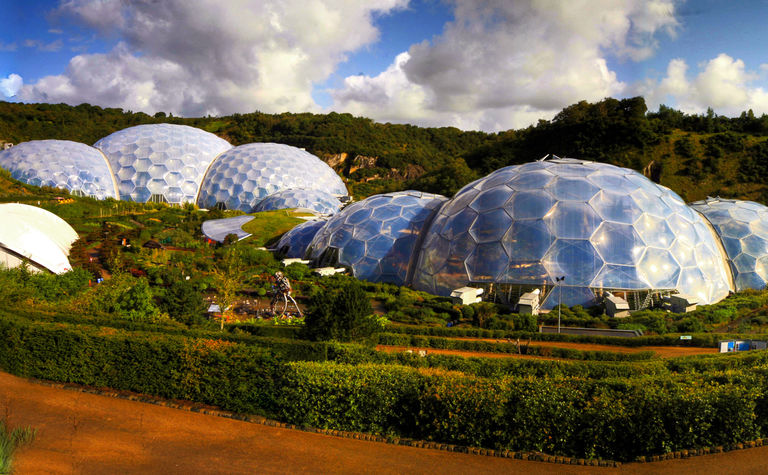 Geothermal drilling is set to begin at the UK's Eden Project

After a 10-year campaign to bring the technology to Cornwall, the partners said that the £16.8 million (US$21.2 million) in funding will enable drilling to start on Eden's site next summer.

Eden co-founder Sir Tim Smit said: "Since we began, Eden has had a dream that the world should be powered by renewable energy. The sun can provide massive solar power and the wind has been harnessed by humankind for thousands of years but because both are intermittent and battery technology cannot yet store all we need there is a gap.

"We believe the answer lies beneath our feet in the heat underground that can be accessed by drilling technology that pumps water towards the centre of the earth and brings it back up superheated to provide us with heat and electricity.

"The missing piece of the jigsaw in a 24/7 clean renewable energy future is this baseload. Now we have the green light and the funding to start drilling we are determined to make this technology work. And we want to work with others all over the world - sharing knowledge and encouraging the change as fast as is humanly possible."

The funding sum has been secured from a mixture of public and private sources. Cornwall's final round of EU funding, the European Regional Development Fund (ERDF), has contributed £9.9 million. Cornwall Council has put in £1.4 million and institutional investors have contributed the remaining £5.5 million.

The EU (ERDF) funding is administered by the UK Government's Ministry for Housing, Communities and Local Government.

The finances raised will pay for the first phase of the project - drilling one well, a research programme and a heat main, to prove the extent of the resource 4.5km down in the granite that lies beneath the Eden site.

That first well will initially supply a district heating system for Eden's Biomes, offices and greenhouses. It will pave the way for the second phase - another 4.5km well and an electricity plant.

Completing the second phase will mean that Eden will be generating sufficient renewable energy to become carbon positive by 2023 as well as aiming to be able to provide heat and power for the local area. 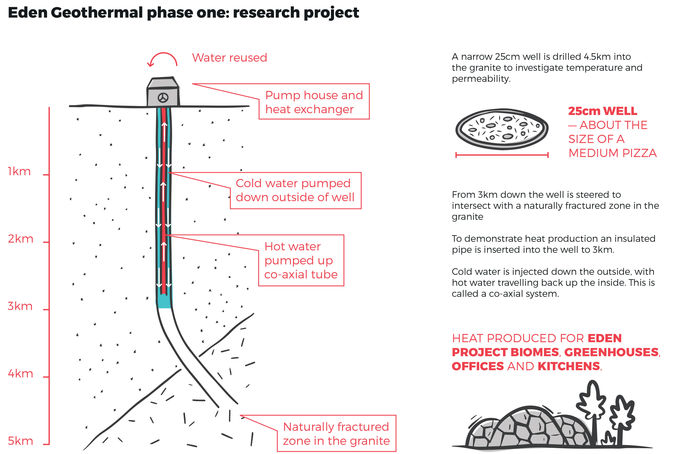 An outline of the planned geothermal scheme at the Eden Project

To deliver the plan, a new company, Eden Geothermal Ltd (EGL) has been formed, which is made up of Eden Project, EGS Energy and BESTEC (UK), which is affiliated with BESTEC GmbH, a specialist geothermal developer and drilling advisor. The EGS Energy team has significant experience and expertise, having been part of the Hot Dry Rocks geothermal programme in Cornwall in the 1980s, the follow-on EU programme in Soultz-sous-Forêts, France and the subsequent commercial power generating projects in Landau and Insheim, Germany, among others worldwide. The University of Exeter will be providing academic and research services to the project.

Guy Macpherson-Grant, MD of EGS Energy, said: "It is exciting that this geothermal development is underway. The geology in the county is particularly well-suited for cost-efficient heat and power generation, and St Austell benefits from particularly high heat flows."

Dr Robin Shail, senior lecturer in geology at the University of Exeter, added: "Cornwall is rapidly re-establishing itself as the UK centre for deep geothermal energy and we're delighted to be involved in this major project in which we will contribute towards achieving research objectives and training of the next generation of scientists and engineers to work in this emerging sector." 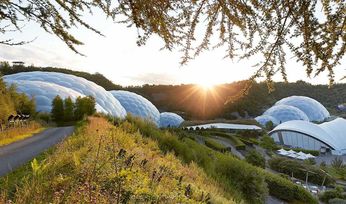 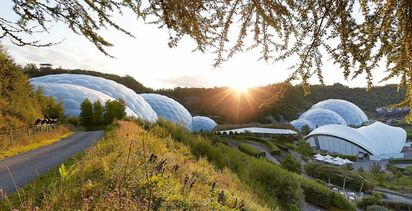 Subsurface characterisation at the UK Geoenergy Observatory in Cheshire