Controlled Thermal Resources (CTR) and technology partner Lilac Solutions, have joined forces to extract lithium from one of the world’s largest known geothermal resources at the Salton Sea in Imperial Valley, California, USA. 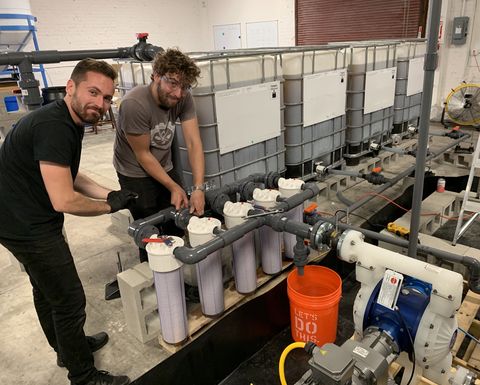 "This significant investment in Lilac's technology creates further confidence in the sector and will greatly assist the scale-up of sustainable lithium projects in the United States," said Rod Colwell, CEO of Controlled Thermal Resources. "It's a real turning point for the US lithium industry. Lilac's extraction technology combined with CTR's geothermal brine resource will deliver a consistent and secure supply of battery-grade lithium products with the highest sustainability credentials."

Lilac's founder and CEO, Dave Snydacker, said the company has conducted numerous large-scale tests on brine samples from around the world and received independent verification on the performance of the technology, which is significantly cleaner, faster, cheaper, and more scalable than existing mining technology.

"Lilac has taken a fundamentally different approach to the extraction of lithium from Salton Sea geothermal brine using unique ion exchange beads developed by our team in Oakland in contrast to prior work by others to adapt conventional aluminium-based absorbents which have not performed well in this application," Snydacker said. "Our technology offers exceptionally high lithium recovery and lithium selectivity, enabling low-cost production, and we have proven these results with thousands of hours of test work on the Salton Sea geothermal brine chemistry. Controlled Thermal Resources is in an excellent position to deliver domestic supplies of lithium here in California with a world-class technical team and third-party oversight by HATCH."

As the world rapidly transitions to electric vehicles and lithium demand is projected to grow four-fold over the next decade, the lithium industry's mining and conversion methods are coming under greater scrutiny. "The media recently zeroed-in on the lithium industry, highlighting concerns around the environmental impacts of hard rock mining, evaporation pond conversions, and offshore processing in China," Colwell said. "While I believe demand for lithium will require supply from many resources by 2023, direct lithium extraction from geothermal brines will set the benchmark to combat these environmental issues. The auto sector is well-aware of these concerns and is already looking to secure the cleanest sources of lithium products for their supply chains."

In contrast to current mining methods, direct lithium extraction from geothermal brines is a closed-loop system that returns spent brine to its original source; utilises 100 per cent renewable power and steam for processing; takes hours, not months to produce high purity lithium products; has a very small physical footprint and a close-to-zero carbon footprint; is not weather dependent or water-intensive; does not require open pit mines, large evaporation ponds or offshore processing and; will run 24 hours a day, seven days a week.

"This is the beginning of a new era for lithium production," Colwell added. "The lithium industry needs to be aligned and committed to a genuinely sustainable, low carbon emission future."

A solution to critically low US lithium supplies

The US federal government has acknowledged the need to develop a strategy around its critical mineral security and has engaged in discussions with the sector. At a state level, California Energy Commission (CEC) chair David Hochschild is actively involved in supporting Imperial Valley's evolving lithium industry.

"California has the potential to be the leading supplier of lithium in the world, driven by efforts from companies like Lilac and Controlled Thermal Resources," Hochschild said. "The CEC is proud of the investments we're making in the future of lithium development in California."

Speeding up the chemical specification and selection process

Lilac's current pilot plant and facilities in Oakland, California may solve yet another critical bottleneck affecting the smooth transition to an electric vehicle future. Currently, it can take years for lithium brine developers to construct new facilities and then process raw brine into high-quality lithium chemicals for off-takers in the battery industry. This is caused by long construction times for large ponds, very slow brine processing, vulnerability to weather conditions, and poor-quality raw materials affected by impurities.

"With CTR unlocking their large brine resource here in California, Lilac can produce lithium-based chemicals to individual specifications quickly and efficiently," Snydacker said. "We can shorten the off-taker qualification process and consequent lead-times significantly, which will, in turn, assist in bringing commercial-scale projects to operation faster."

Responding to questions around earlier attempts to extract lithium from the Salton Sea's mineral-rich geothermal brines, CTR's COO Jim Turner, who has managed geothermal power plants in the Salton Sea region for over 20 years said extracting lithium from geothermal brines had its challenges in the past. "One of the issues with previous attempts was ‘bolting-on' lithium extraction systems downstream from existing power plants. These systems were basically ‘force-fed' spent brine which was not ideal." Turner said.

The company expects to deliver its first 17,350t of battery-grade lithium carbonate in 2023 and has the capacity to scale up to 34,700t LCE per annum in 2025 with operating costs per tonne anticipated to be within the first quartile industry cost range.

"We're delighted to be working with Lilac to transform the lithium industry, and to create a thriving and secure minerals supply chain in the United States," Colwell concluded.