An insight into the work undertaken by SafeLane Global on behalf of Dunelm Geotechnical and Environmental for Durham County Council as it looks to reduce its energy costs. 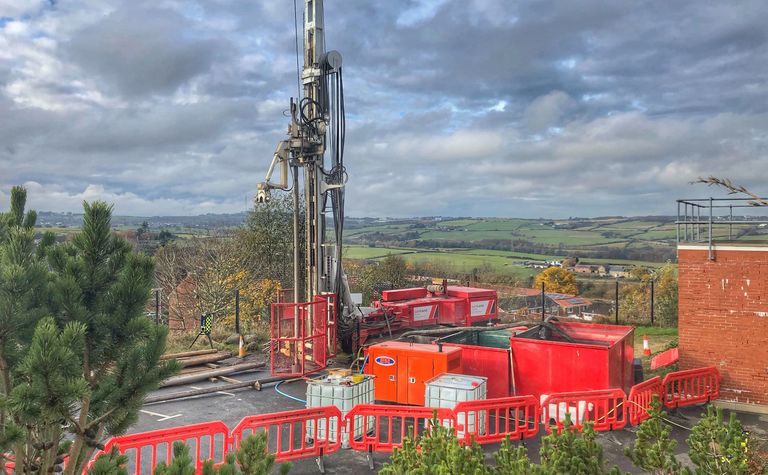 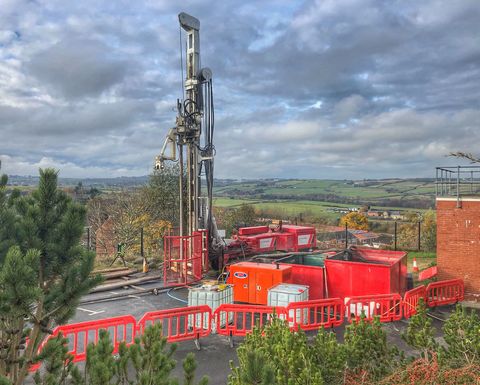 Energy is a significant cost for the leisure sector. From flood-lighting sports grounds to heating indoor swimming pools, these expensive demands can make it particularly difficult for council-run leisure centres to strike a balance between customer appeal and cost-efficiency.

Looking at options to lower overheads, forward-thinking Durham County Council in the UK decided to investigate whether water from abandoned coal mine workings could be used for the geothermal heating of one of its leisure centres in Stanley in the North East of England.

Abandoned mine workings in the UK contain an estimated two billion cubic metres of water at average temperatures of between 12 and 16C. According to research by experts from Durham University, if heat corresponding to just a 4C temperature drop was removed from this volume of water and upgraded with a heat pump, enough warmth could be liberated to heat well over half a million homes.

There are, however, challenges both in terms of accessing this water and in terms of liberating its geothermal potential. There can be geological challenges with the abandoned mine workings and the risk of toxic gases for example. Additionally, because of the relatively low temperatures involved, the heat source needs to be as close to the end energy requirement as possible, to minimise any thermal losses which would render the process non-viable.

Historically many towns and cities in the UK grew specifically because of their coal reserves; this now means centres of heat demand and areas of abandoned mines often correlate. This is the case in Stanley, which was why Durham County Council decided to investigate whether it could harness enough geothermal energy from a nearby abandoned mine to heat the local leisure centre.

The Council asked the Coal Authority to provide them with a borehole specification to tap into the mine workings close to the Louisa Leisure Centre site in Stanley. The borehole would enable the investigation of the mine water's viability for geothermal heat production. If the initial borehole provided positive results, it could then be used as a reinjection borehole for a mine water heat scheme.

Based on a study undertaken by the Coal Authority and Durham University, and taking into account the Council's requirements, the borehole specifications were drawn up. It was accepted that an anticipated required flow would be four litres per second and expected that the depth to the mine water would be approximately 20m below ground level (BGL) down to 155m BGL. The design life of the borehole should be in excess of 20 years. Additionally, the borehole was to be drilled vertically and straight. The primary target was an underground mine roadway in the Low Main Maudlin Seam at approximately 164 to 166m BGL. If the borehole did not contact the roadway, there was an option to drill to the Hutton Seam goaf at 177m BGL.

It was accepted that casing and borehole diameters could need adjusting to accommodate reductions in diameter to allow drilling through mine workings above the target.

Upon completion of the drilling, the connectivity of the borehole to the mine workings would need confirming, the borehole would need clearing of drilling fluid and mud and, if required, a falling head test could be conducted subject to an assessment of drilling works and any losses of flush etc. during drilling.

Drilling into the details of the project

Dunelm Geotechnical and Environmental was commissioned to manage the project and complete hydrogeological testing, and they sub-contracted SafeLane Global's engineering department to drill the borehole.

Speaking about the borehole's specifications, SafeLane's water well manager, John Gowans, explains that when he looked at the geology, he agreed with the Coal Authority's suggestion that some adjustments may potentially be needed to the design to accommodate drilling through mine workings.

"From extensive experience drilling into mine workings, I knew that there was potential for additional workings that weren't anticipated in the original design. So, we started the borehole at a larger diameter to enable the installation of an extra string of casing should unexpected workings be encountered.

"I was unsurprised when we did indeed hit workings in the high main seam and quarter seam, and the extra string of casing was installed to enable drilling to continue without extended delays.

"If we hadn't included this option in the well design, the only option would have been to grout up the workings - all in all, a very expensive process with huge delays to the very tight programme."

The water level in the working was 145m below ground level, which was at the lower end of the estimated depth. The specification required the test pumping to run at a flow rate of 4 litres per second, but due to the size of the well and the depth to water, this was not possible because the biggest pump available could only pump 2.3L per second from this depth. Therefore, SafeLane carried out a pumping test for 24 hours at this reduced flow rate with no effect on the water level in the well, this proved that the workings could yield a flow rate of 2.3L a second, and probably much more.

To gain an understanding of the connectivity to the workings a falling (variable) head test was carried out. This was done by pumping water from storage tanks into the well at a rate of 60m3/hr. This did not give a conclusive result as the water level within the well remained at the standing level, but it did indicate that the well would take at least 60m3/hr, which would be four times the required flow rate. This proved that the well is suitable as the recharge well for the final geothermal heating system.

Following the completion of all tests, Durham County Council was provided with a final report from Dunelm and SafeLane, detailing the evidence that their plan to utilise water from abandoned coal mine workings for the geothermal heating of the leisure centre in Stanley was entirely viable. 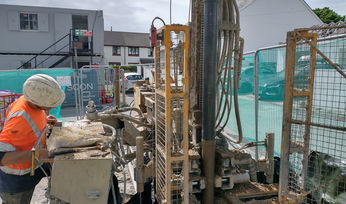 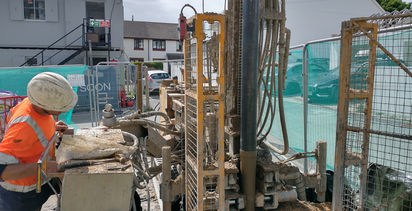