As Sweden aims to achieve carbon neutrality it is making increased use of geothermal energy and one local utility company has turned to Comacchio for help drilling suitable geothermal wells. 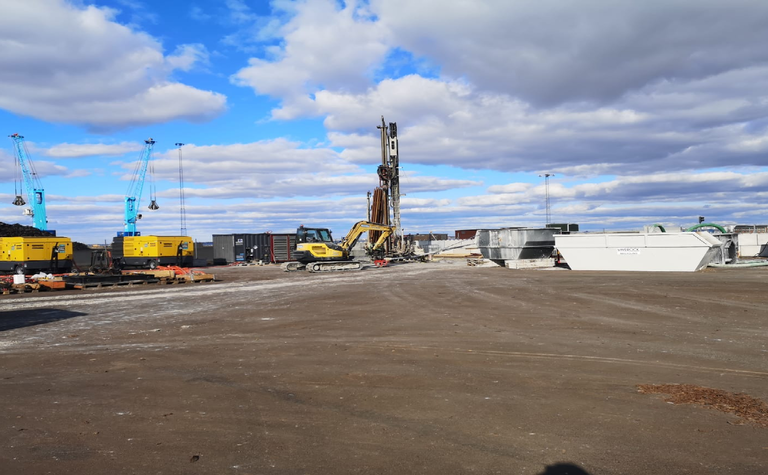 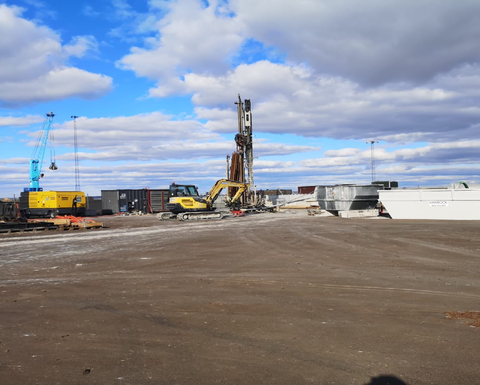 The 1990s saw continued progress in heat pump technology in general and ground-source heat pump (GSHP) technology, in particular, resulting in a world-leading role for Sweden in GSHP research and industry. Although most of the geothermal development in Sweden relates to shallow geothermal systems based on GSHP technology, recent developments have shown an increased interest in deep geothermal energy for district heating.

The Swedish branch of German utility company E.ON Värme Sverige AB has announced plans to build a deep geothermal heat plant that will be used for district heating in Malmö, in the South of Sweden.

The company aims to be an international leader in geothermal heat and energy and the pilot plant planned for Malmö will collect heat from depths of 5,000 - 7,000m. Temperatures from this depth can heat water to 160C. The plan is to use a Hot-Dry-Rock system (also known as enhanced/engineered geothermal system), where water is inserted under pressure through an injection well and the rock mass is stimulated by the formation of a network of cracks and fractures. This engineered subsurface heat exchanger allows the circulation of water and the extraction of the heat stored in the rock. Using several production wells the heated water will be pumped back to the surface and fed into Malmö's district heating network.

To perform the extensive drilling operations required by the project, E.ON is partnering with energy company St1 Oy, headquartered in Helsinki, Finland, and operating across the Nordic energy market. St1 has already completed a complex drilling project for deep EGS development in Espoo, Finland, where a plant is expected to go on-stream this year and conditions are similar to those in Malmö. Other E.ON partners include the Swedish Energy Agency, the Swedish Geological Survey, the City of Malmö, and the University of Uppsala. The pilot project is one of Europe's first geothermal power plants to extract geothermal energy from depths of several kilometres on an industrial scale.

The Swedish geology is mainly characterised by the massive Baltic shield with its crystalline bedrock and moderate geothermal gradient, but sedimentary rock formations of significant thickness can be found in the southern part of the country, including the Malmö region. These formations contain porous sandstones at considerable depth with very good hydraulic properties.

E.ON is currently investigating the geological conditions through test boreholes. As part of this assessment, St1 Lähienergia Oy, a subsidiary of St1 Nordic Oy, has completed the drilling of two monitoring wells (geophone wells), over approximately 800m in depth. Drilling was carried out from February to late March 2020.

The aim of the project was to drill two geophone wells with a maximum depth of 1,000m. The maximum allowed inclination of the wells from the vertical was three degrees, but thanks to the use of special stabilisers included in the drill string to control the bit and keep it on the right trajectory, a lateral displacement of one-degree was achieved by St1 crew.

Verticality was not the only challenge posed by the project. Operating abroad required careful organisation of the supply chain; all the structural elements of the well, the necessary drilling equipment, wear and spare parts needed to be carefully planned in advance. Much attention was paid to the selection of the bits and drilling equipment, with a view to guaranteeing precise control, tool functionality and durability. 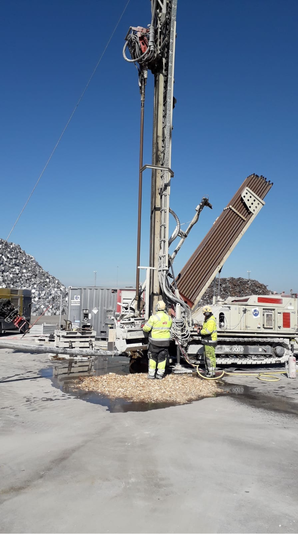 The MC 900P drill rig from Comacchio was operating at the limit of its capability drilling geophone wells with a maximum depth of 1,000m

The drill rig utilised for the work was a Comacchio MC 900P (the previous version of the current GEO 900), a 12t-pull rig in the 20t weight class. The required depth was known to be at the limit of its capabilities. Drilling was performed using DTH hammer, 200-270mm bits and two compressors with boosters. Suitable flow and pressure values were determined through previous experience in medium-deep well drilling projects. The automatic rod-handling device equipping the Comacchio rig allowed for the use of 6m long drill rods with a diameter of 89mm.

Drilling up to 600m deep was performed in one pull, which allowed for a fast drilling process without intermediate steps for bit replacement.

The compact size and high manoeuvrability of the rig was crucial for the efficient organisation of the job site: two so-called blasting wells (with a depth of 50m and 115mm diameter) were drilled in addition to the two geophone wells, requiring the rig to be easily moved from one site to the other.

One of the major challenges was particularly strong water production and its management. The first 200m of the wells were, therefore, piped and cemented to isolate the different water layers.

"The project was estimated to last from two to three months," explains Kristian Savela, CEO at St1 Lähienergia Oy. "But we managed to complete it in one and a half months. The project management required close cooperation with the client and the other stakeholders. Real-time drilling monitoring and reporting enabled efficient information flow and decision making. A project succeeds when everyone does their best, takes care of safety, and spends more time planning and preparing rather than drilling."

If all goes according to plan, the plant will supply renewable and resource-efficient heat to district heating customers from 2022. E.ON hopes to have built five geothermal plants in Malmö by 2028, each with an installed capacity of 50MWth (thermal megawatt). The heat will replace biofuels and biogas for heat generation, contributing to Malmö's vision to be climate-neutral by 2030.