According to some estimates, women make up only 11% of the UK construction workforce, with certain specialised sectors lagging even further behind. With the construction industry facing the growing threat of skills shortages, attracting more women seems like a no-brainer. Debbie Darling talks to three successful women within the drilling sector about their career choice 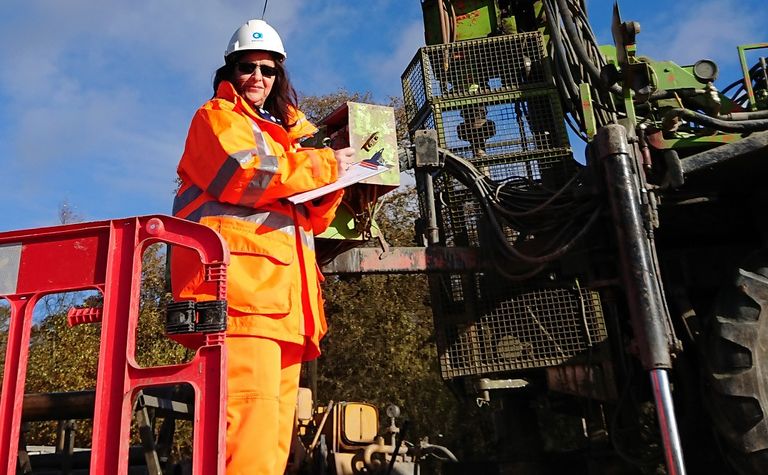 While much is being done to recruit and inspire more women to enter the construction industry - and more women than ever are taking advantage of this opportunity - it is not a time for complacency. Companies, schools and government could all be doing more.

I spoke to three women who work within drilling about the challenges and obstacles they've faced, as well as the opportunities and rewards that the sector can offer. They are keen to encourage more women to consider a career in construction, or more specifically the geotechnical sector.

Anne Baxter, who is the chief executive and director of Raeburn Drilling & Geotechnical, as well as current chair of the British Drilling Association, initially chose civil engineering as a career before specialising in geology.

"I was not encouraged at school to pursue a career in construction, rather it was my family that supported the idea," she says regarding her motivations.

After achieving a BSc degree, she began her career with Whatlings Foundations, and then moved to Terra Tek along with two other employees after a management buyout.

"It was logical then for me to undertake an MPhil in engineering geology while working," she explains. "I had great support from the managing director to progress and develop and was supported to undertake an MBA as well."

Structural Soils' senior engineering geologist Natalie Bews' road to construction was not that dissimilar to Baxter's, being as varied as it was challenging. While her current role is sales oriented, covering marketing and business development, by trade Bews is an engineering geologist, having graduated with an applied geology degree. She also did not exactly choose construction as a career, it sort of chose her.

"I almost fell into it after graduating," she says.

"I knew I loved geology and initially thought a career in palaeontology was for me, as this called to my creative side; however, I thought this career path would be quite restrictive, confined and perhaps a little too refined for me. I needed to be more free, unrestrained and able to be whole lot more expressive.

"The great outdoors, drilling rigs and contracting industry were calling me. The site works, the ever-changing scenery, the challenge of programmes and deliverables, the diverse and challenging geology of the UK, and being involved with the geotechnical investigations for the development of projects of local and national importance excited me.

"To be involved with the building of a new nuclear power station, the London underground system, motorways, docks, harbours, canals, reservoirs, iconic buildings, secret buildings, and renewable and sustainable energy sources, is what I like. This is what makes me get out of bed in the morning."

Although her school did not encourage Bews to consider construction as a career directly, it supported her choices, which was equally important.

"I was encouraged to do whatever interested me and what I enjoyed," she confirms.

"I took up geology only in the upper sixth form as a fall back after dropping out of economics and accounts. I enjoyed both human and physical geography, so geology was a natural progression and extension of that. There is no gender differential in either geography or geology, and neither of these were seen as subjects for the boys, although they were male dominated. The same can be said for the degree course."

On graduation she was employed by Soil Engineering Geoservices, formerly Norwest Holst Soil Engineering, as an assistant engineering geologist, working her way up through the ranks, eventually project managing multifaceted ground investigations projects valued in excess of £1 million (US$1.3 million).

Bews says the pinnacle of her engineering career was running the Cashel bypass ground investigation in southern Ireland, which also marked the point at which she decided she needed a change of direction.

"Marketing, business development and sales are now the career path I firmly tread and love equally as much as my field engineering days. In my current position with Structural Soils, I am responsible for ensuring that the business maintains its position within the industry and receives sufficient tender opportunities to achieve turnover with profit and growth year on year, as well as seeking out new business streams and directions for the company to grow within."

SOCOTEC's Clare Chapman, in turn, worked her way up through the ranks from geological technician to operations director.

"Fresh out of A levels, all I really knew was that I wanted to work outdoors," she recollects.

"With an interest in geology, I wanted to explore the world of employment and took my first job as geological technician.

"I would go on-site daily for the first four years of my career to carry out tasks such as field testing, sampling and in-situ testing.

"While I now manage the overall operations of dynamic probing, percussive window sampling and concrete coring, as well as rotary and cable-percussion drilling, back then I was the one doing it. Like anyone starting out in their career, I had to demonstrate that I could do my job. Being a female technician, especially 30 years ago, there was the need to prove that being female did not hinder my abilities as a geological technician. It was important to pull my weight, and more, to make sure I wasn't the weak link in the team."

Of course, as in any industry, it's not always plain sailing, and Chapman is keen to point out the occasional bumps in the road.

"In the geotechnical industry, it is not unheard of to overcome challenges, and I've faced many in my career progression," she reflects.

"Deciding I wanted to progress my career, I began to study for a degree in geology at the Open University; working and studying made for a long week of multitasking. When I moved jobs, as with any job changes, I had to adapt quickly to new site techniques, supervise subcontracted drillers and manage other members of staff, which included engineers, technicians and administration staff. This transition to contract coordinator inspired me to enrol on a business studies and management course, leaving behind my geology degree.

"Even then, I was told that being a woman in the industry meant I would never obtain respect from the drillers or engineers or understand the capabilities of the business. The novelty of having a female boss soon waned though; my abilities for directing contracts, organising site activities, producing reports to meet client requirements and managing time were recognised. Plus, I've never been afraid to get my hands dirty."

Bews cannot recall there being any gender-based obstacles at any point, from school to college, all the way through to her current position.

"I think that gender-based obstacles are actually more a manifestation of a person's own personality and gender paranoia. Personally, I have never encountered any problems or issues with being a woman in engineering. For any woman thinking of entering construction I would say go for it," she states.

So, what is the best way to encourage more women to take on roles in the construction sector?

Bews feels the construction industry is still struggling with a perception problem.

"From the outside, it probably does have some image issues," she says, "but I do not see that from within. I see brilliant engineers and businessmen and women doing a great job within the UK and global construction industry."

She continues: "Whether the sun shines or the rain falls, there is always a rig turning. A sample of geology will be recovered and brought to surface that has not seen the light of day for millions of years, if ever. Being the first person in the world to see a fossil or a formation, and using that sample to understand the earth, its dynamics, and how we as humans interact with it to build our homes, our businesses, our lives, our world into a better place - these are some of the things that make me smile every day, and these are the reasons I love geology and the drilling industry."

Baxter adds: "The focus on large prestigious infrastructure projects, which are in evidence all over the UK, does, I believe, show construction in a good light. The opportunity to travel around the UK, interacting with a wide range of companies involved in construction, the sense of achievement on completion of a project and the fact that every day produces some new issue or opportunity, all adds to its appeal."

Chapman agrees: "The construction and drilling industry is such an impressive industry to be a part of, as it's incredibly satisfying to know that I have been involved in some of the most iconic buildings and developments in the UK. "

And according to Baxter, young women today have plenty of options for further education and job opportunities within construction.

"For young women thinking of a career in drilling or construction I would say have no reservations, just make sure you have the right qualifications for the career you have in mind, oh, and certainly a driving licence," she says.

Bews has strong views on how to encourage more women into construction, commenting: "I do not think there is a need to differentiate or make it easier for women to enter the industry. Why does it need to be easier? Are women less able than men? Absolutely not.

"What needs to be done is more positive promotion of women in the industry, so women know that there is a place for them and that they would indeed be welcomed on an equal playing field.

"More can be done in the home, before school even, by creating an environment that is not gender specific and where children are encouraged to be who and what they want to be and feel most comfortable doing or being."

Chapman comments: "I feel my achievements have been solely down to my abilities, attributes and determination being recognised, rather than my gender.

"In my time, I've been able to empower others and embrace a team ethic. Getting females into science, technology, engineering and mathematics is one way of moving forwards to an equal gender industry."

It is clear that women are making inroads into construction, but more importantly, appear to be enjoying the career rewards the sector offers. With the industry in constant need of skilled workers, perhaps the future of construction rests with women. 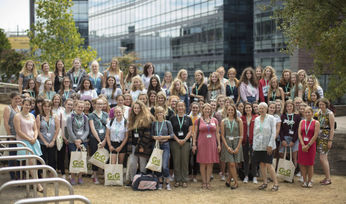