Stantec engineer Benjamin A. Halada describes a geotechnical investigation job for the Kennedy Mill Bridge replacement in Kentucky, US 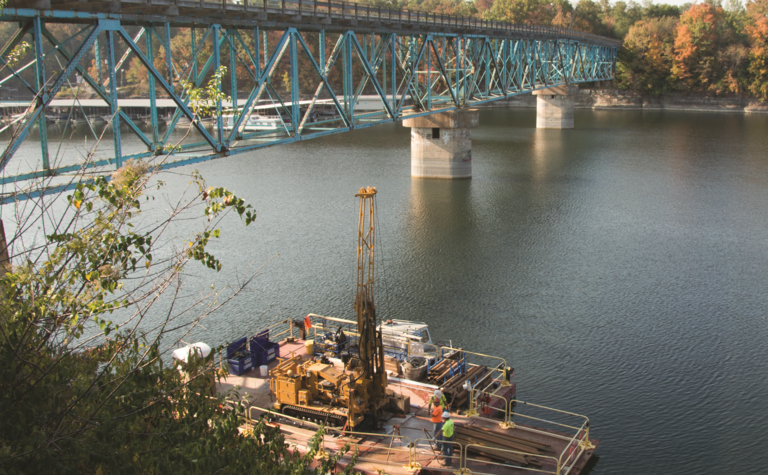 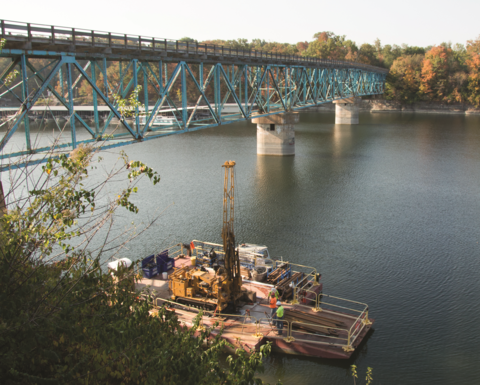 The Kentucky Transportation Cabinet (KYTC) is in the process of replacing the Kennedy Mill Bridge, which carries Kentucky Highway 152 over Herrington Lake in central Kentucky.

The Kennedy Mill Bridge had to incorporate the Dix Dam impoundment into the final design.  Specifically, the depth of the resulting impoundment, Herrington Lake, had to be considered as well as the geometry of the surrounding bedrock. Prior to the construction of either structure, the Dix River carved its path through the central Kentucky bedrock resulting in sheer cliff walls on the Mercer County side and an approximate 1H:1V slope on the Garrard County side.

The proposed impoundment height of nearby Dix Dam resulted in the design and construction of two 250ft (76.2m) tall piers for the Kennedy Mill Bridge. The piers were constructed oblong in shape and hollow as if they were chimneys for a factory. These two tall piers along with a third shorter pier support the 752ft (229m) span of the bridge.

Shortly after completion of the bridge and impoundment of Herrington Lake, the tallest pier nearest the Mercer County side started to move. By 1936, the pier had moved 30in (762mm) vertically and tilted upstream and toward Mercer County by 12in (305mm). The actual cause of the movement was never determined but theories abound.

Fast forward to 2011 when KYTC performed a Data Needs Analysis Study to look at replacement options for the bridge. In spring 2013, design and consulting company Stantec performed vertical and angled borings on the Mercer County side to determine if fractures existed in the area of the proposed abutment.

In fall 2014, Stantec was tasked with performing a geotechnical exploration for two proposed piers.  At the proposed pier locations, the water depth ranged from 15ft to 180ft. Water of this depth, the 1H:1V slope and the lack of overburden did not allow for the use of spuds to stabilise a barge. If it weren't for the 1H:1V slope  and the sheer cliff face, concrete deadmen set 1,000ft away and steel cables could have been used. Tying off to the existing bridge pier was out of the question. After reviewing several other options, it was decided to use a dive team to install anchor points into the bedrock cliff and 1H:1V slope.

Divers installed a series of anchor points 15ft to 50ft below the water surface and at a 45° angle from the corners of the barge. Steel cables, up to 500ft in length, were connected to the anchor points and to the barge. Stantec utilised an in-house sectional barge to serve as a working platform for the drilling. The cables could not be directly connected to the barge, so four ‘legs' were built that would connect to the barge's existing female/male locking system. The legs were 10ft in length and extended into the water about four feet. A winch was placed on top of the leg, and two pulleys, one at the top and one at the bottom of the leg, directed the cable along the length of the leg. The winch cable was then connected to the steel cables that ran from the anchor points. Utilising the system of four legs each with an independent winch, the crew was able to move and position the barge over the boring locations.

One boring was drilled for each of the eight proposed drilled shaft locations. Six inch steel casing was set to the bottom of the lake. At the deep water locations, the casing was driven through and held in place by ten feet of sediment and weathered rock. At the eight boring locations, HQ size rock coring was performed to depths of 70ft to 100ft below the lakebed. The bedrock formation was competent, consisting of limestone and limestone interbedded with shale. Rock quality designation (RQD) typically measured from the high 80s to low 90s, and unconfined compressive testing ranged from 10,000psi to 25,000psi. Penetration rates averaged 60ft per day.

The rock coring went well once the crew became comfortable using the positioning system and setting the casing, but the project was not without complications. This work was performed during a rainy October which presented two problems. First, drawdown to winter pool occurs during October, and secondly, rainfall resulted in fluctuating water levels; therefore, the crew had to monitor the slack/tension in the cables, else the barge would move and knock the casing/core rods out of vertical or sink the barge. Admittedly, one HQ core barrel and 100ft of six inch casing were left on the bottom of the lake.

Safety is of utmost priority on any drilling job, but its importance is magnified when working on the water. This project was completed safely because of the experience, planning and training of the drill crew. Due to its complex nature, barge work should be carefully evaluated and planned before arriving onsite.

The estimated completion date for the replacement bridge project is November 29, 2019. 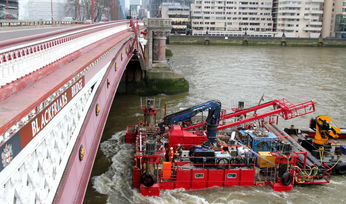 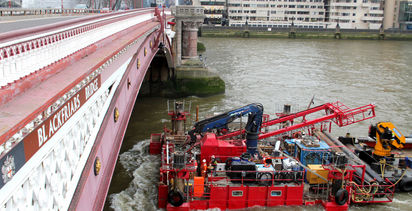