Fast and efficient in a variety of subsurface conditions, rotary drilling methods are widely used for a broad range of applications. However, as each technique has its unique advantages, choosing the right one for the project at hand is essential. Signe Hansen looks at how and where the different methods are best employed 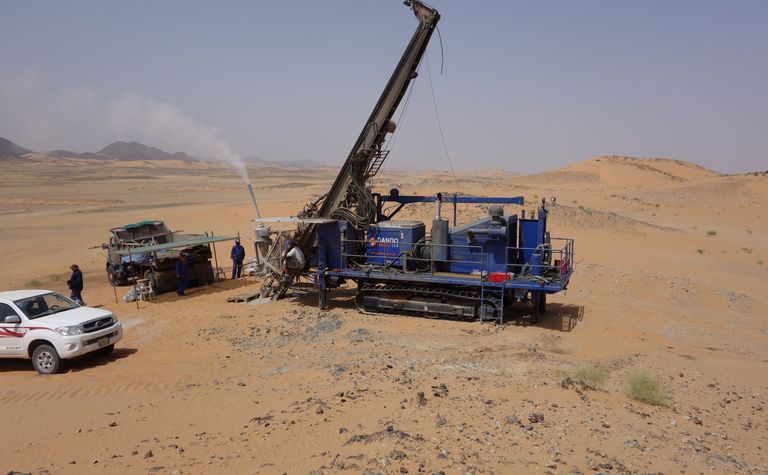 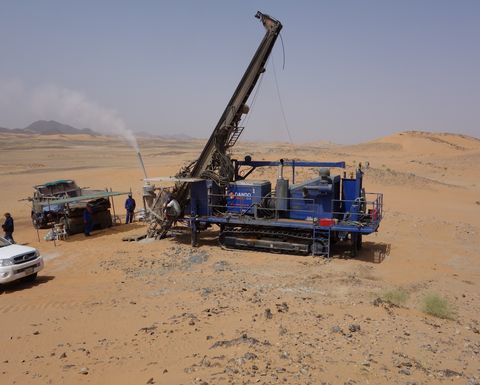 Rotary drilling in its simplest form, employing a sharp rotating drill bit to push through the subsurface, has been in use for millennia. However, the first mechanically powered hydraulic rotary drilling equipment was invented in the US in the late 19th century. Back then the hydraulic-rotary drills used water to circulate the drill cuttings up and out of the borehole, but, in 1901 at the Spindletop well in Texas, a coincidence led to drillers discovering the benefits of adding mud to the water to stabilise the wall of the borehole. The discovery led not just to the successful completion of the Spindletop well but also the first Texas oil boom.

Conventional mud rotary is still the most widely used and versatile drilling method not just to explore for oil but for a wide range of applications such as environmental investigation, geotechnical explorations, mineral sampling, deep-well installation and more.

One of the advantages of mud rotary is that it eliminates the need for a drive casing, making it both fast and cost-efficient, especially in unconsolidated, alluvial and loose geological formations.

Andrew Whitsell, operations manager at Cascade Drilling, a US-based provider of environmental and geotechnical drilling services, explains: "As a part of the drilling process, this method builds a mud cake on the perimeter of the borehole that keeps loose deposits stable during drilling. There is an added benefit to the mud-caking process, because it can seal off water-bearing zones and formations."

Consisting of water, often mixed with clay additives such as bentonite or polymer, the drilling fluid (mud) also works to cool the drill bit, and this, together with the stabilised borehole wall, enables rigs to drill up to several thousand feet per day and create hole diameters of more than 48in (122cm). But there are some drawbacks; the method requires large amounts of water and can produce a high level of waste.

"Although mud rotary has a lower comparative cost and higher comparative production, there is a higher cost of well development and the additional burden of properly managing and disposing of the investigation-derived waste," Whitsell points out.

While conventional mud-rotary drilling is only univocally unsuited for exceptionally large, poorly stabilised boulders or cavernous conditions, the requirement for a lower environmental impact, unaltered formation samples or higher penetration rates in hard-rock formations can make other methods preferable alternatives.

When it comes to well installation, geotechnical boreholes and mineral sampling in hard-rock conditions, air rotary is generally the better alternative. Using air instead of fluid to circulate the cuttings to a cyclone at the surface where they drop out, air rotary offers maximised penetration rates and thus reduced drilling costs per foot, as well as good borehole cleaning capabilities and clean cutting samples.

One of the advantages of the method is that it does not cause infiltration of drilling fluids into the formation, which means reduced well development time. Furthermore, airlifting while drilling allows operators to easily determine when the static water level is reached and how much an aquifer might produce, explains Whitsell.

"Since there is no fluid introduced into the borehole, the formation samples are more representative of the borehole and are not altered by the drilling fluid. The static water level in the hole can be easily determined once static is encountered. Less well development time is historically required since the borehole walls are less damaged."

Air rotary can also be an alternative to coring in consolidated rock. Nick Holroyde of Energold Drilling Corp, a global provider of drilling solutions for the mining and energy sector, says: "Purely based on exploration drilling, air drilling is much quicker than core drilling, and you get more metres for your money. The sample is not quite as accurate or as presentable as core, but for initial exploration this usually suffices."

However, when drilling in areas with high water tables, air rotary can become more time- and cost-consuming, as a large volume of air is needed in order to lift both the sample and the water. This in turn creates the need for large compressors or boosters. Hence, while air rotary is less reliant on an existing water source and has a smaller environmental impact in the form of investigation waste, its total environmental impact and suitability depend largely on the environment and ground conditions.

"You don't need water when you drill with air ,so in that respect it is less reliant on natural resources. However, drilling and support equipment can be significantly larger, which means you need to create good access, possibly cutting down a lot of vegetation and creating passable roads," stresses Holroyde.

"There are also significantly more moving parts with air drilling; you are running two engines - one to power the rig, the other to power the compressor - and dealing with small particles travelling at high speed and that are abrasive. Maintenance is key, as is the need to carry a good range of spares. In short, if you are exploring on open, flat land with arid conditions and hard rock, air drilling would be most companies' first port of call. If you are drilling in wet ground, in dense jungle, with poor access, then coring is more likely to be cost-effective."

First introduced to the industry around 40 years ago, reverse-circulation (RC) drilling delivers rotational and impact energy in the same manner as direct air rotary. What makes the method unique is that it uses a dual-wall drill rod consisting of an outer and inner tube. The inner tube allows the drill cuttings to be transported back to the surface in a continuous flow achieved through, in most cases, blowing air between the inner and outer tube. Thanks to the method's fundamental separation of the drills bits from other parts of the hole, it is widely known for offering a fast and cost-efficient method for collecting uncontaminated rock and mineral samples.

Whitsell of Cascade Drilling explains: "The method requires a pneumatic hammer or tri-cone bit, which can give you very representative sample of what you might be drilling in at the time. The method has high-penetration rates, which can also reduce costs depending on if you are just requiring an exploration borehole. You can drill larger sizes, which will not be as cost-effective, but can give you a high-quality borehole at very deep depths."

The RC method can be applied to various ground conditions, but is, like air rotary, particularly suited to dry hard rock and works well when representative samples of the formation are needed for study. Like air rotary it can provide a cost-efficient alternative to core drilling with less contaminated samples.

Where there are unconsolidated formations like sand, gravel and boulders that make it difficult to drill with conventional methods, dual rotary can be the optimal choice. With dual rotary, the rotary head has its own feed system and raises and lowers independently of the lower drive which advances casing as needed. The casing can be advanced ahead of the drill bit to minimise aquifer cross-contamination and loss of circulation, and eliminate borehole stability problems. On the downside, the cost per foot is typically higher due to the cost of steel casing, welding, and the installation time that it might take to obtain the desired depth. This is why the method is often taken into use when other methods fail.

Hence, while carefully considering which method is best suited for the geological conditions, being prepared to switch methods could be what makes or breaks a project.

This is what happened when, in a recent project, Cascade Drilling, based on the available geology reports, initiated a well installation using RC drilling.

Whitsell tells GDI: "Approximately half way into to the borehole, the crews encountered serious issues with the stability of the borehole; it would not stand on its own. Numerous attempts to clean the borehole failed as the borehole continued to collapse. At that point, our crew collaborated with the client and all agreed to switch from reverse circulation to dual rotary.

"With dual rotary, we could advance casing through the unstable zone at 850ft [259m]. The crew was able to advance the borehole beyond that to 1,900ft total depth and install an 8in low-carbon steel well. The well performed extremely well. If it wasn't for the dual-rotary rig, the borehole would have been abandoned." 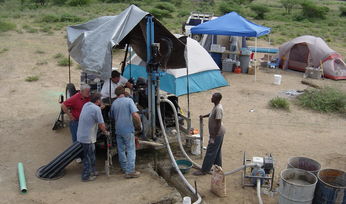 On the right track?