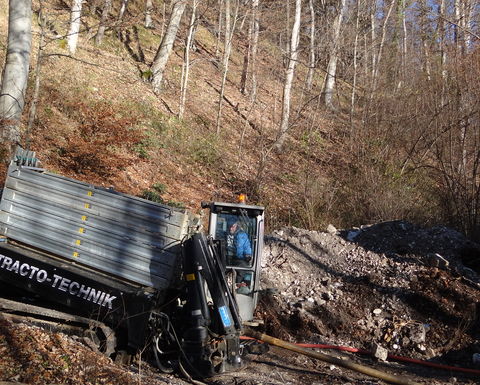 Mössingen is a small town in the district of Tübingen in Germany belonging to the foreland in the medium range of the Swabian Jura.

Due to landslide recurrence, the region appears in the media quite frequently. The Swabian Jura is a tabular low mountain range, with a length of 220km and altitudes between 640m and 1,015m.

Mössingen lies directly ahead of the bluff of the Swabian Jura, which is also called ‘Albtrauf' (escarpment). For centuries the escarpment region has been the scene of landslides; many incidents have taken place between Geislingen an der Steige and the municipality Klettgau. However, no other place in front of the escarpment has witnessed as many landslides as Mössingen.

On the April 12, 1983, one of the biggest landslides in Germany in the past 100 years occurred at the Hirschkopf, a woodland of the escarpment.

After some very heavy rainfall, more than four million cubic metres of rock sloughed away with a loud roar along the precipice of the Hirschkopf at a stretch of 600m; it slithered down and came to a rest almost 1,000m away in a hollow between the Hirschkopf and the neighbouring Farrenberg.

More than nine million tonmes of rock from the escarpment had gained momentum and formed great rotational slipping slabs bedded on a stony desert of detrital rocky waste masses. Huge sections of the woodlands were destroyed or pushed together, piling up the underground to form slanted slabs. The steep face of the Hirschkopf, reaching an altitude of 820m, was peeled off up to the flank ledge of the hill at 720m height. Since the landslide area affected ‘only' woodland, rehabilitation measures were not carried out. The complete landslide area was turned into a nature conservation area (geological site and biotope) instead.

The steep edge of the Swabian Jura in the south of Mössingen reaches an altitude of 885m, while the inner city of Mössingen is situated about 410m below. The relief of the rugged and cleaved escarpment alternates strongly here, but in fact, landslides would have been expected in the southwestern neighbourhood, the Hohenzollern area, because the steep tracks there have frequently been damaged by slope failure in the past.

In 2013, after rain for days on end, starting at the end of May and going on until June 2, five further landslides from the escarpment within the city area of Mössingen occurred. Especially beneath the Rossberg on a surface of 9ha, approximately half a million cubic metres of soil and cut rock careered into agitation above a settlement. Above this residential area in the district of Öschingen, central slope areas along a stretch of 260m started slipping. Fortunately, the greatest part of this landslip stopped before it could reach the settlement, but the pressure distribution coming from the moving soil and rock masses above caused underground deformation, which damaged many buildings.

The residential area had to be evacuated, supply lines were cut off, the slope was barricaded on a large scale, and measurement and aerial surveys were carried out immediately. Ten residential buildings clearly showed shear cracks and continuous measurement proved that the creeping motion at the foot of the slope was still going on for a while. Extensive actions were started at short notice to stop the hillside movement quickly. Some of these measures were the immediate elimination of the surface water collecting in the slope depressions by installing and renewing fluting profiles, building drainage galleries with the help of gravel piles reaching far down for large-surface drainage of the mountain slope, and finally establishing geodesic and geotechnical measuring systems.

Even while the drainage was being installed, a long-term concept for all landslide-prone locations on the slope in Mössingen was developed. Especially in the close vicinity of the landslide above the residential area, slight signs of movement and locomotion trails were determined along the slopes; this discovery initiated the plans for a dewatering concept.

The geodetic and engineering geology monitoring of the escarpment situation around Mössingen lead to the development of a long-term catalogue of measures by the Federal Institute for GeoSciences and Natural Resources of Baden-Württemberg, Division Engineering Geology, and a private engineering office specialised in landslides. One item in this list of measures to be taken includes provisions for dewatering in the slopes exposed to movement and locomotion trails above the residential areas in the districts of Mössingen.

Besides the hillside situations above Talheim, the district of Öschingen beneath the Schönberger Kapf (up to 801m high) in the open-field system Auchtert is particularly in need of drainage, especially since older landslide massifs can form slope depressions, here which fill up with water after every precipitation event. Just to make sure that this water cannot unnecessarily wet the slope through the retaining depressions, drainage was planned to dewater the deepest regions of the troughs through closed drain pipes leading directly into still deeper regions, which are already equipped with well-dimensioned drainage pipelines. The banked up depressions of the slope are situated in the midst of wildly overgrown wooded regions. The tapered depressions, with lengths of 10-100m, have trees growing criss-crossed in the cleavage. These slope depressions with their cross-bracket structure are situated above a residential district in Öschingen, and the  precautionary drainage was considered extremely urgent.

The first drainage line installation to ward off rainwater accumulation was planned for 2016, even though winter was already near. Additionally, the drainage installation had to be carried out with minimum interference to the sensitive slope area; therefore a minimally invasive trenchless method was chosen for the project. The construction and drilling company Maier Bau was commissioned with the task. This company had already carried out ambitious building projects in the field of landslide rehabilitation in the district of Tübingen.

Two closed drainage lines, with an outer diameter of 280mm, one 65m, the other 160m long, with gradient rates of 39.4% (the lower slope stretch) and more than 45% (the higher slope stretch, partially with inclination sections up to 90%). were going to drain two long cross-bracket type slope troughs above the eastern settlement on the slope of Öschingen. PE 100-RC material was chosen deliberately because the slope setting is built up mainly of slope rubble masses which, for the greater share, consist of splintery limestone pieces. Although rocks from the Lower and Middle White Jurassic (malm rock) are in situ at the Auchtert hillside, the Auchtert slope itself is covered with splintery slope rubble masses of crushed White Jurassic lime rock. Only in several tens of metres in depth, natural White Jurassic rock formations (marl zones and ‘well-layered' alternating limestone) can be found. The bore paths, running vertically along the slope inclination, were planned to lead more than 30m deep into the slope, meaning that natural rock horizons of the White Jurassic in situ would also have to be penetrated.

The bore was carried out by an experienced drill master in a relatively short period of time; he worked with a rock-boring bit for the pilot bore and a hole-opener for the gradual expansion and completed the job in mid-December, to the satisfaction of all parties involved. With the steerable drilling system Grundodrill 18ACS, work in these trying slope regions was uncomplicated and reliable throughout.

As soon as the steep rock bores were completed, numerous peripheral crushed rock drains, inlet channels, intake pipes and connection lines were installed in the Auchtert slope. In the early spring of 2017, the surrounding measures were accomplished and the concrete-cast inlet structures rounded out.

For longer periods of rainfall, the region now has better drainage prospects than ever before, although there is still a potential for further optimisation. Not all slope depressions have been equipped with drainage, with priority given to the largest first. Slope dewatering can definitely be replenished with further trenchless drainages. Utilising the Grundodrill 18ACS has demonstrated that this can be performed economically while treating the environment with care. 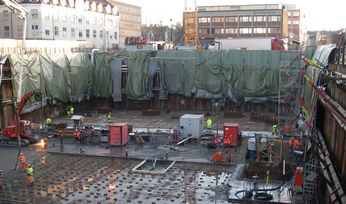 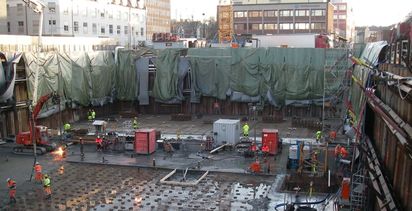