The primary well for Finland’s first enhanced geothermal system is nearing its completion. The system will be based on two up to 7km-deep production holes, the longest ever to be drilled in Finland’s granite bedrock. St1 Deep Heat, the company behind the pilot project, shares the lessons learned 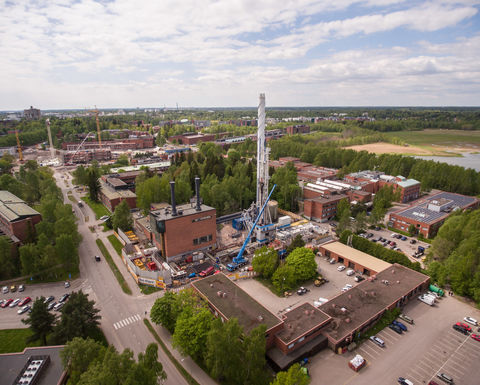 Due to the predominance of Precambrian bedrock, up until this year, geothermal energy and heating projects in Finland have been limited to ground heat systems with heat pumps. However, for the first time ever, St1 Deep Heat is working on constructing an enhanced geothermal system (EGS) for Finland's first industrial-scale heat plant running on geothermal energy. The project is based in in Otaniemi, Espoo, which, like most other places in Finland, has some of the world's hardest ground conditions. There is just 10m of clay, then granitic rock. In addition, the age of the bedrock means that where similar projects in Germany and France have been profitable with depths of 2-5km, St1 Deep Heat has had to design production wells of 7km.

"Drilling-wise it's quite different than any other project," says project manager Tero Saarno. "The rock that we have here is one of the oldest in the world and that means that it has had time to cool down, so we have to drill really deep to get to the temperatures we require for district heating; we are aiming for 6-7km. It's a hugely deep production well - the deepest heat production well in the world.

At the bottom of the wells, temperatures will be around 115°C, and water will, when pushed up through the second well, be warm enough to generate district heating without the use of any additional fossil fuels. The plant will be the only of its kind in the Nordic countries, and its completion thus represents a number of new opportunities.

The scale and significance of the project are reflected in the investment in equipment. From the beginning, drilling costs were expected to represent well over half of the entire plant's investment, and a massive drilling system including a 50m-high drill with a hoisting capacity of over 400t was assembled on site. After extensive tests, the first 4,500m of the primary well were drilled with air hammer technology from Numa. With a hole diameter of 120cm at the surface and around 20cm at the deepest position, the drilling of the first 4,000m took 70 days with non-stop drilling and a five-man crew operating the drill rig.

"Luckily, we have a lot of hammer drilling knowledge in Finland and, of course, knowledge about the ground conditions. We have been using our own know-how and the best people available to teach the drilling crew," says Saarno. "We drilled 4km in 70 days. That includes one casing and cementing, and we can do it even faster - that you can drill that fast in that kind of pure, very hard granitic rock is some kind of world record."

However, after the first 4,500m, the project had to be put on hold as the system could no longer flush through sufficient liquid. The next four months were spent developing and testing different types of water-based hammer drills. Drilling was then continued. "We are doing research and development on technologies all the time, because, even though there are hammers that can drill in these conditions, it's not as efficient as it could be. It's better than rotary but we need to improve it. We are doing a lot of research and development on down-the-hole tools, the hammer itself and the drill bits," Saarno notes.

Drilled from the same concrete platform, the plant's two wells are just 10m apart on the surface. That means it has been necessary to use a regular slower rotary drill to steer the wells apart. "It's easier to have both holes together on the surface, but then we have to steer them apart to get enough heating power," explains Saarno. "We steer with rotary and then, when we have finalised the steering and turned the well to the decided inclination, we go back to the hammer. This is due to the fact that steering with water hammers is not tested, nor are there are any tools for that."

At the finishing line

Currently down to 5.5km, the first well is now estimated to be about two months from completion. The second well is down to 3.3km, and the heat plant is estimated to be completed in about a year. Despite the delays, this first pilot project has served its purpose, namely to develop and test the technologies for further projects in the Nordic countries.

"The main lesson is that hammer drilling really is the best bet in this type of rock conditions. When you get it working, when you have the right tools, it's really efficient," says Saarno, adding: "It's a pilot project, and day one we knew that it would most likely cover its own cost but not generate any profit for us. But the next one will, and we already have licences and permits for the projects in Finland and Sweden, and, when we have taken all the lessons to be learned from this, we will start the next one immediately."

When completed in 2018, the heat plant is estimated produce up to 40MW of renewable emissions-free geothermal heat, which will cover up to 10% of the district heating demand in the Espoo area. 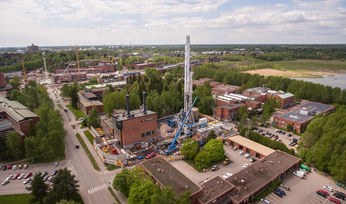 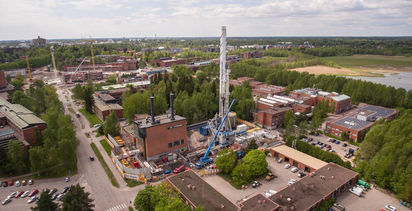