It is necessary to get the right drill for the job explains Nancy Argyle as she examines how the rise in interest in geothermal heating and cooling in residential developments in North America creates specific drilling requirements. 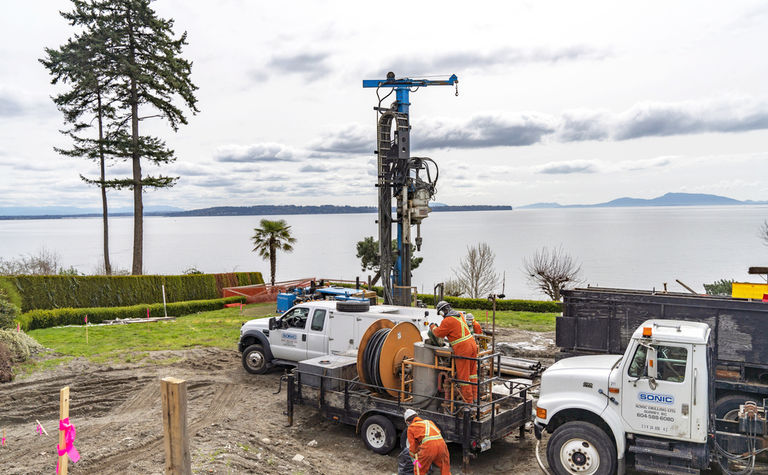 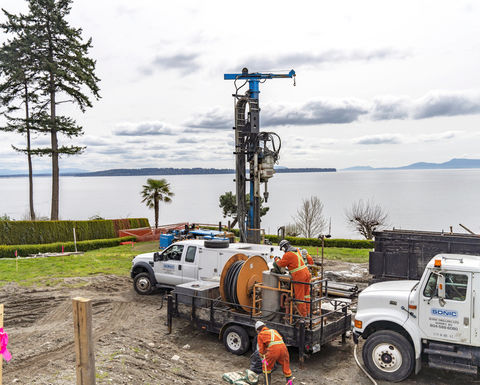 Perched on a cliff and overlooking the crystal waters of the Pacific ocean, it is understandable why some west coast locations are so special… even decades ago when small modest homes first sprang up along scenic ocean facing lots.

Now, as many older homes give way to large new builds, there is an opportunity to embrace an option that was not available back then - cost-effective and environmentally-friendly geothermal heating and cooling.

Today, it makes sense for larger buildings like fire halls, sports arenas and colleges to take advantage of geothermal installations and, likewise, many larger luxury homes and mansions have done the same. Even smaller homeowners, dedicated to using alternative energy sources, have opted for geothermal. But, as some project managers discover, it is not all easy going if you use the wrong drill for the job.

Fortunately, there is a four-time award-winning, patented drilling technology that is ideal for the task. Developed in Canada more than 35 years ago by Ray Roussy, a mechanical engineer, sonic drilling technology is now used across six continents around the world, in dozens of different applications - from a New York underground subway project, to Arctic climate change investigation and the search for gold in Peru. Plus, the technology offers some very unique features that make it perfect for geothermal installations, especially in difficult terrain.

First, it drills 3-5 times faster and can easily buzz through mixed soils.  Due to Vancouver's location near an ocean and the end point for a number of rivers, it is not uncommon for rigs to encounter everything from sand and clay to large boulders in the same hole and many times Roussy's company, Sonic Drilling, has been called in to provide a rescue rig to finish projects where other rigs had failed.

Secondly, it can drill, case, place the geothermal loop in the ground and grout - all in one operation - and that is something no other drill on the planet can do and a function that has now been patented.

Because of these advantages, sonic drilling has become a favourite of large luxury homeowners with numerous Vancouver-area mansions, utilising it for their geothermal projects. For example, on a recent project in White Rock, Sonic Drilling was hired by Naikoon Contracting to drill eight holes to a depth of 250ft, which only took one very short week on site to accomplish. The sloped site overlooked the ocean and would soon be home to a new 7,136sqft geothermal residence.

Naikoon Contracting is a licenced premier custom home builder specialising in passive house and NetZero construction. Passive house construction is defined as a rigorous, voluntary standard for energy efficiency which reduces the building's ecological footprint while NetZero is considered a design and construction method that allows the building to produce as much energy as it consumes within the course of a year.

Tom Gregg, construction manager for Naikoon Contracting, says he had a great experience working with the crew from Sonic Drilling. "They were very professional, knowledgeable and helpful… we had to delay the project for a week due to geotechnical concerns and they were flexible and helped drill some test holes for us on short notice."

With decades of environmental investigation experience, Sonic Drilling was able to drill both the geothermal holes and the holes required for a geotechnical report and, by not using any drilling mud, produce 70 per cent less mess on site, making it one of the greenest drilling methods available. Sonic Drilling was hired by Naikoon Contracting to drill eight holes to a depth of 250ft for a project in White Rocks, Vancouver

In addition to his local contracting company, Sonic Drilling, Roussy also is president of the Sonic Drill Corporation which works with other partners around the world including drill manufacturers such as SonicSamp and Dando to create easier access to his technology for the European market.  His sonic technology is also licenced in Asia to Japan's Toa-Tone Boring to service buyers there.

"Instead of forcing companies to ship a drill head across the Atlantic or Pacific, we're working with local companies that we respect and trust to service the markets in their areas," explained Roussy.  "This saves customers money and time in shipping a sonic drill to their location."

In addition to expanding its global partnerships, Roussy said that, in the future, he expects to see his sonic drilling technology increase its market share in most drilling applications but especially in the construction sector where it holds much promise.