The importance of borehole monitoring

Water supply boreholes can provide a reliable and cost-effective means of supplying water for public and private use. For many commercial operations requiring large volumes of water for production or process, a borehole supply can provide raw water at a fraction of the cost that would otherwise be incurred if a mains supply from a water network were used. 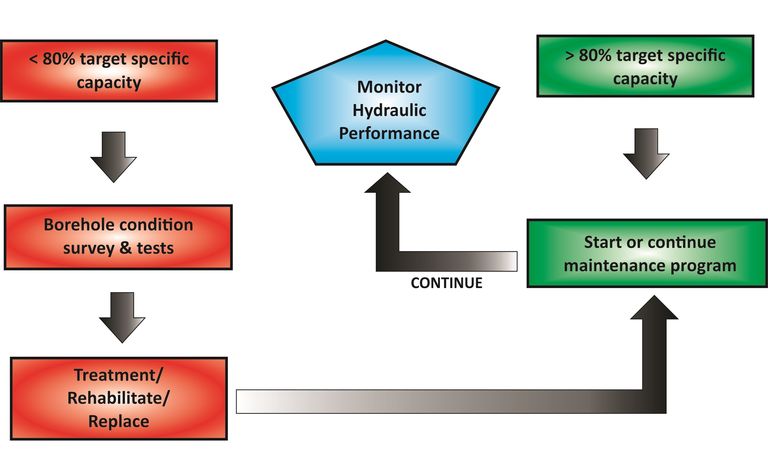 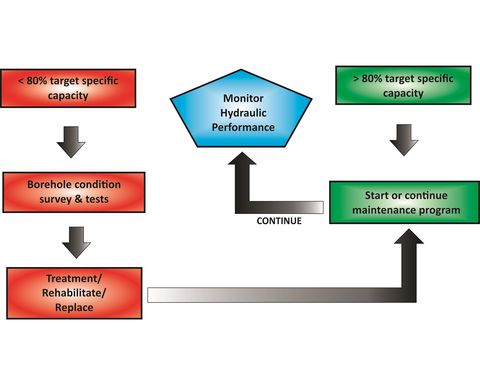 An example of a maintenance decision tree for planning borehole cleaning

It is therefore surprising (but not uncommon) to find out that ‘borehole maintenance' is not a term that features high up (if at all) on the priority list for many commercial operators. Often very little is known about a borehole that supplies a business-critical raw material to a large manufacturing site. Even basic details on the exact whereabouts of boreholes can even be sketchy, let alone information on depths, diameters and the pumping equipment used. There is a tendency to adopt the ‘if ain't broke, don't fix it' approach to borehole maintenance and quite often, the first sign of a problem is when the water stops flowing out of the tap.

Boreholes are constructed into water-bearing formations (aquifers) using a mixture of screens and casings. Boreholes can be constructed using a range of methods and materials, depending on geological conditions and the requirements of the borehole.

It is a common misconception that boreholes are used to ‘suck water out of the ground'. In fact, water is pumped out (or abstracted) using a pump. Typically, submersible pumps are used to abstract water from boreholes, although suction pumps may be appropriate for some very shallow supplies.

The amount of drawdown is dependent on the hydraulic efficiency of the borehole, which is made up of two components - the ‘aquifer drawdown' and ‘borehole losses'. Aquifer drawdown is dependent on the hydrogeological properties of the formation and, theoretically, should remain constant over time. Borehole losses reflect how well the borehole has been constructed, developed and maintained; consequently, this component may change over time.

The ‘if it ain't broke, don't fix it' approach does not work when applied to boreholes. The unfortunate implication of that approach is that when there is a problem with a borehole, it is often a serious one and, therefore, expensive to fix. While pump failures may result in a temporary loss of supply it is something that can be quickly fixed. However, problems with boreholes themselves, which involve a loss of performance over time, are much harder to resolve once they start to occur.

Reduced borehole performance basically means there is a reduction in the hydraulic efficiency of the borehole that is often caused by mechanical, chemical and/or biological processes. However, the operator may only be aware there is a problem when abstraction rates start to decrease, even though the problem may have been manifesting itself for many years. While mechanical and chemical rehabilitation activities can be carried out to improve efficiency, it is often not possible to restore the borehole's original performance. In extreme cases, a borehole can experience a catastrophic failure due to the collapse of well screens and casings resulting from large pressure differentials inside and outside of the borehole. In these cases, the only option is to replace the supply.

Monitoring does not need to be complex or expensive. In its simplest form, regular manual measurements of water level and abstraction rates provide an inexpensive means of monitoring long-term changes in borehole performance. Such a monitoring scheme may be appropriate for a single borehole site but it is not effective for sites with multiple boreholes.

Automated monitoring equipment allows measurements to be collected routinely, at a high frequency, across multiple locations and removes the potential errors or delays associated with manual monitoring. Such systems allow both short- and long-term trends to be effectively monitored. Where necessary, telemetered solutions allow data to be provided in real time and are appropriate where abstraction needs to be carefully managed on a day-to-day basis. In some cases, it may also be appropriate to expand systems to include water quality indicators.

In all cases, the data obtained should be reviewed and presented as key performance indicators (KPIs). Plotting the specific drawdown (abstraction rate per unit drawdown) over time provides an easy means of measuring the hydraulic performance of a borehole. A similar KPI can be developed to monitor pump performance by collecting data on electrical loads.

Regularly reviewing of borehole performance data should be used to plan borehole cleaning and rehabilitation exercise. A simple ‘maintenance decision tree' can be developed to decide when to carry out certain activities.

Using the example of a maintenance decision tree shown, the decision to carry out remedial action is taken when the specific capacity of the borehole drops to 80 per cent. Taking action at this point has a high chance of restoring the original borehole performance.

Monitoring is a continuous process and the true value may only be realised many years after the data collection starts. In addition to informing routine maintenance activities, data can also be used to support compliance with environmental licences and permits; demonstrate the sustainability of abstraction; and monitor potential impacts to/from local receptors. In an increasingly regulated world, monitoring can be as much about collecting a robust evidence base to justify continued abstraction as mitigating against unexpected failures and delays.

Dr Phil Ham is the principal hydrogeologist at Envireau Water, a leading water resources consultancy specialising in the development, management and regulation of independent water supplies 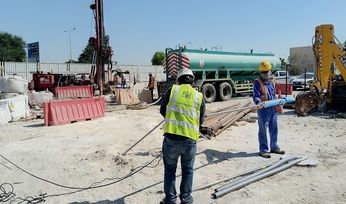 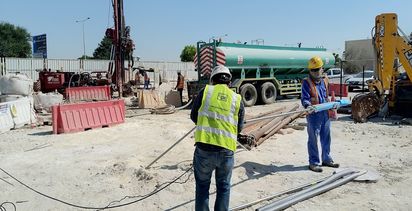 The answer is blowing in the wind

The reuse of foundations for urban spaces