Sheet Piling (UK) Ltd (SPL) suggests that a government safety review of the 200-mile smart motorway network in the UK could see its team, and its unique sheet piling equipment, come to the rescue of contractors worried by the recent review. 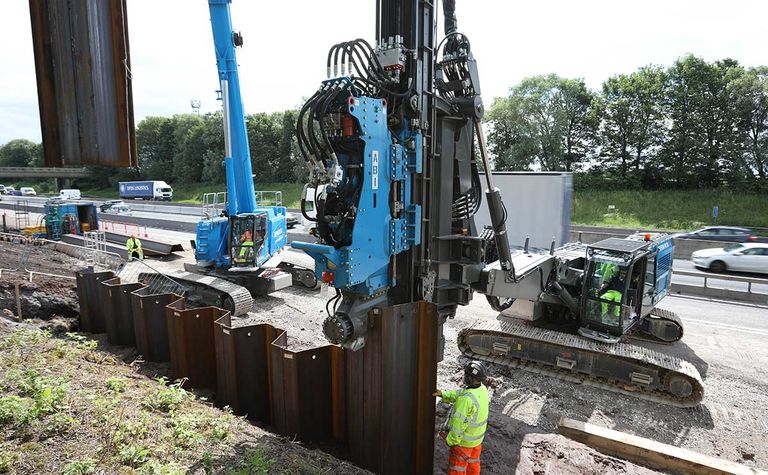 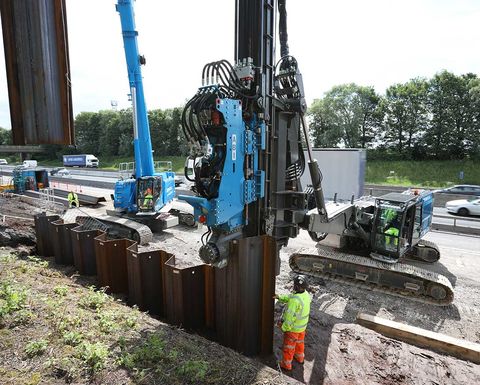 SPL has already proved how its unique sheet piling rig can deliver significant cost savings to smart motorway projects UK-wide, which rely on having in-built safety zones in the form of emergency rescue areas (ERA). Now there is a call for additional ERA, it feels its sheet piling methods, and ways of installing sheet pile walls, have a big part to play in furthering smart motorway safety.

Sheet Piling (UK) Ltd's £1.2 million (US$1.5 million) TM 12/15 LR sheet piling rig was built to the company's own specification and on the basis of its sheet piling expertise, which extends over three decades. The rig has already been used for smart motorway infrastructure work on the M23, M1, M25, M27 and M62 motorways, installing sheet pile walls within the ERA that have been sited 2.5 miles apart.

Using the rig has saved contractors around £40,000 - £60,000 (US$50,000 - US$75,000) on average, per ERA with a typical 100m sheet pile installation. Using this rig for all ERA construction would save the highways sector millions, at a time it is worrying about the additional costs associated with making smart motorways safer.

The government safety review set down a requirement for ERAs, also known as SOS lay-bys, to be situated no further than one mile apart, and ideally just 0.75 miles apart where feasible. Additionally, it wants to address particular safety needs on the M25, by having a further 10 extra refuge areas retrofitted.

Years of lobbying by the UK motorists organisation the AA have led to this point, but the real catalyst was a BBC TV Panorama programme which pointed to 38 deaths on parts of the 200-mile smart motorway network in the past five years and, in particular, a 20-fold increase in near misses on a single stretch of the M25.

The AA believes that smart motorways can be safe traffic management systems, pointing to the successful M42 pilot scheme conducted in 2006. However, for that pilot, the emergency stopping areas were located every 600m. It was only when work began on smart motorway projects, that the distance between stops rose to what is now typically 2.5 miles.

With the new requirement to increase the number of ERA, SPL's unique rigs could play a major role in upgrading safety on smart motorways - of which another 300 miles are in the planning. The company already has a sister long reach rig (TM20) due to arrive later this year, ensuring it is poised and able to install sheet pile walls at any new ERA that need to be created.

These rigs deliver such phenomenal savings because they can reach so much further than any other rig when installing sheet piles Their reach is 8.1m - 3m more than any other sheet piling rig - and this has real benefits. The rigs require no special platform to be built out from the existing motorway infrastructure, being able to install pile from the existing motorway structure. This drastically reduces both the costs and time involved with an ERA sheet pile wall installation.

Sheet Piling (UK) also sees other benefits of using its unique sheet piling rigs, whenever they are deployed. There is less disturbance to wildlife habitats and the landscape, because it minimises the amount of infrastructure required for the sheet piling equipment's use.

Then there is the advantage for motorists, who are less impacted upon up by the works traffic that has to enter and exit the ERA construction zone.

SPL hopes that Highways England and leading motorway construction firms will build the use of its long reach rigs into their specifications, noting the savings it can bring to infrastructure widening projects.

There is a 10-mile stretch of smart motorway in South Yorkshire that is currently being reviewed for safety and SPL hopes that nobody is scared away from retrofitting new refuge areas on the basis of cost and without having considered the cost savings the company could deliver.

The company is optimistic that such reviews will consider its fleet of long reach sheet piling rigs as the cost-saving workhorse behind sheet pile wall installation and that motorists and their families and friends become the beneficiaries of much-enhanced safety on the smart motorway network, as a result. 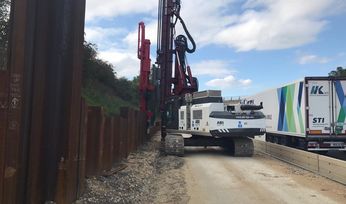 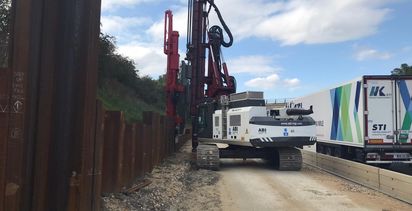