Keller is taking a lead role on the first Florida Department of Transport project for half a century to use auger cast piles. Dubbed ‘the mother of all highway construction projects’ by local media, the US$800 million Signature Bridge is part of a major regeneration in Miami. 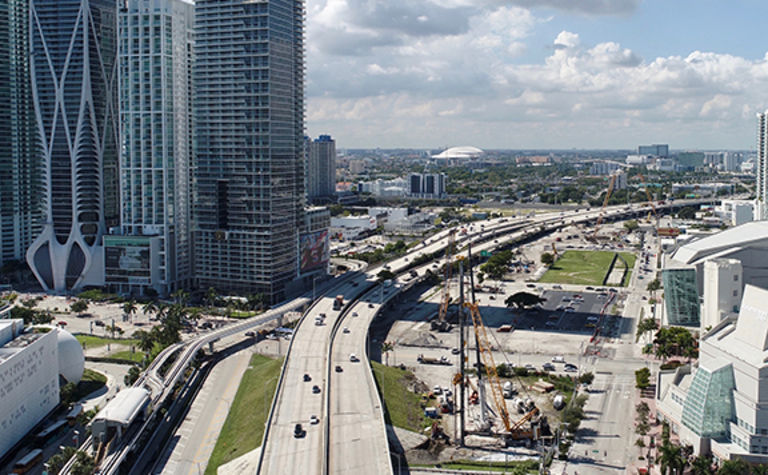 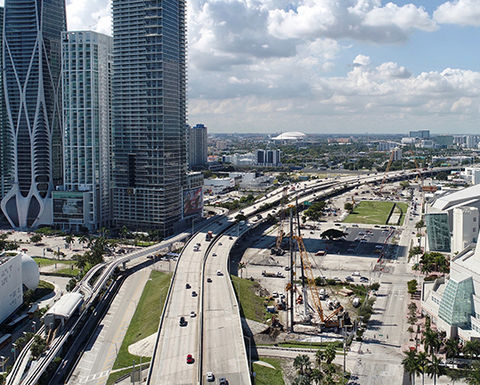 Keller will work in phases to install more than 2,000 auger cast piles, with diameters of 30 and 36in, up to depths of 134ft during work on the Signature Bridge in Miami

With six enormous, fountain-like arches, the 1,000ft long Signature Bridge will be an eye-catching addition to the Miami skyline. It will also be the defining centrepiece of a transformed area of the city, featuring plazas, gardens and 30 acres of urban parkland.

It is a high-profile project for the Florida Department of Transport (FDOT) and one it is keen to get absolutely right. But when early tests showed that the FDOT's preferred foundation method of precast piles would not have enough load capacity, and that drilled shafts would take too long, it needed a new solution.

"The FDOT had a very bad experience with auger cast piles about 50 years ago, and ever since they've been reluctant to use them again," explained Andres Baquerizo, Keller vice president - Special Projects. "But over the last few years, as part of my role on the National Committee of the Deep Foundation Institute, we've been promoting advances in auger cast pile technology and explaining how this is now a technique you can genuinely trust."

The fact that Keller has successfully used auger cast piles for around 90 per cent of high-rise towers in the area, achieving several world records along the way, helped convince the consulting engineers to meet with Keller and develop an auger cast pile design solution. That solution was then presented by Keller to FDOT and general contractor (Archer Western-de Moya joint venture), who green-lit the project.

After being awarded the contract, Keller started on site in September 2019. Work began by carrying out a rigorous regime of test piles, with support from affiliate GEO-Instruments and specifically area manager Lee Gabriel.

Gabriel's team installed sister bar strain gauges for the load-bearing O-cell tests, as well as a shape array instrument to measure deflection during lateral tests. "Usually, we'd measure lateral pile movement at the surface, but for this project Keller wanted to provide a greater level of reassurance," Gabriel says. "So that's why we installed the instruments inside the pile casing to monitor movement for the top 60ft of the pile, with sensors spaced every 0.5m. Data was collected every minute during the test and was made accessible to the client via a dedicated website for easy access and review while the test was ongoing.

"The biggest challenge was the schedule. We went from installing sensors on one pile every other week, to doing two or three in a week. It required a large push from us to mobilise production and set up the 60 plus sensors for each pile, but we were able to deliver and give the team the data they needed to proceed."

Over the next couple of years, Keller will work in phases to install more than 2,000 auger cast piles, with diameters of 30 and 36in, up to depths of 134ft.

"We're one of the few companies capable of installing piles to such depths with full-length reinforcing," added Baquerizo. "Traditionally, the FDOT has specified fixed-lead rigs on site because of a belief that you always need pull-down force to drill to the specified depths. The fixed-lead rigs have drilling depth limitations that prevented their use on parts of this project.

"We were able to prove that our design-build equipment (leads, augers, drill bits, power units, etc) were specifically designed for such purpose and had been successful in thousands of projects."

Although it is still early days, the project is moving well despite its challenges. "The specifications are extremely strict," said Nick Feldt, Keller senior project manager. "Although the ground conditions aren't particularly difficult, the FDOT specifications require us to pump in a specific way, resulting in a lot more grout than we'd normally use. That's taken a little getting used to. Coordination with their grout plant, delivery trucks, spoil removal and rebar fabricators is imperative to install piles at this fast pace."

Opening up a new market

The other main challenge has been logistics, as Feldt explained: "It's a bridge, so we're working on a series of small sites along a mile-ong stretch in a built-up area. We're having to move regularly, which requires careful planning. We also start work at around 3am before the traffic gets too busy, and finish in the early afternoon."

Because of an existing bridge nearby, Keller is recommending low-headroom piles in some areas. This will allow the team to install foundations without the need to first demolish the original bridge, saving months on the schedule and minimising traffic disruption.

"The fact that we've been able to convince FDOT not only to accept large auger cast piles but also to use low-headroom piles, shows they have complete trust in us," adds Baquerizo. "We're very aware of that, we've got an amazing team and superintendent working on the project and we won't let the client down."

And with the FDOT since commissioning more new projects with auger cast piles, a new market is opening up that could see more opportunities for Keller to support state infrastructure. 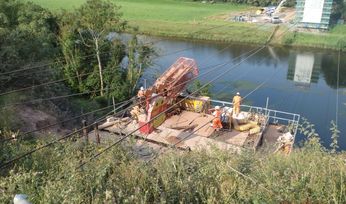 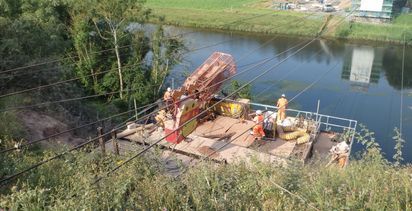