HS2 has begun work on the UK’s longest railway bridge, with a team of ground engineers sinking the first of almost 300 piles that will form the foundations for the Colne Valley Viaduct. 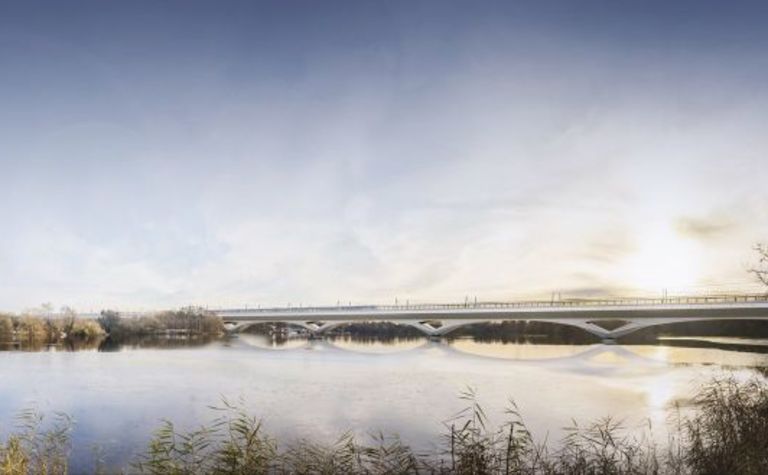 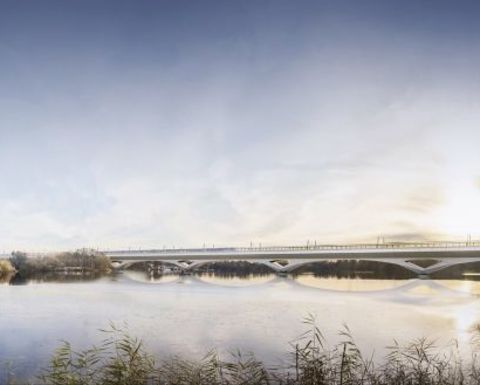 Work has begun to install almost 300 piles needed to support the Colne Valley Viaduct, which will form part of the UK’s HS2 high-speed rail network

The viaduct, which will carry the new high-speed rail line for 3.4km across a series of lakes and waterways on the north-west outskirts of London, will be almost a kilometre longer than the Forth Rail Bridge and carry trains travelling at speeds of up to 200mph.

Set low in the landscape, the design was inspired by the flight of a stone skipping across the water, with a series of elegant spans, some up to 80m long, carrying the railway around 10m above the surface of the lakes, River Colne and Grand Union Canal.

The structure will be supported by 56 piers, with the widest spans reserved for where the viaduct crosses the lakes, and narrower spans for the approaches. This design was chosen to enable views across the landscape, minimise the viaduct's footprint on the lakes and help complement the natural surroundings.

Over the next year, engineers from HS2 Ltd's main works contractor Align JV - a team made up of VolkerFitzpatrick, Bouygues Travaux Publics and Sir Robert McAlpine - will construct 292 piles under the ground to support the viaduct piers.

On top of each group of piles - some of which will go up to 55m into the ground - a concrete pile cap will support the pier which will in turn support the full 6,000t weight of the bridge structure above. Instead of hammering the piles into the ground, holes will be bored before being backfilled to create the pile.

HS2 Ltd's central 1 project client Rohan Perin said: "The Colne Valley Viaduct will be one of HS2's most iconic structures and it's great to see work now starting in earnest. I'd like to thank the whole team for the huge amount of work they've done to get us to this point."

Align's project director Daniel Altier added: "I have no doubt that the viaduct will become one, if not the most striking element of HS2 phase 1 once complete. The way it will be constructed is going to be equally fascinating for engineers young and old. The sections for the deck will be fabricated at our main construction site to the west of London just inside the M25, and using a huge launching girder, the deck will be formed from north to south, along the line of the route, thereby keeping unnecessary construction traffic off the roads. I am delighted that today we have reached this important milestone in the viaduct's construction."

Over the last six years, HS2 has worked closely with Affinity Water and the Environment Agency to monitor water quality and agree working methods. These will be monitored by a team of specialist engineers during construction in order to protect the natural environment.

An extensive programme of test piling has already been completed with engineers sinking 12piles at two locations with geological and structural data from these tests fed back into the design of the viaduct. This has resulted in a 10-15 per cent reduction in the depth of the piles and associated time and cost savings.