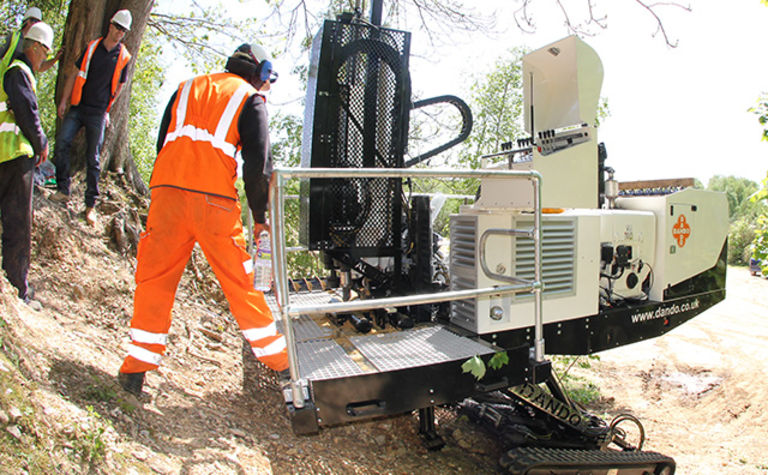 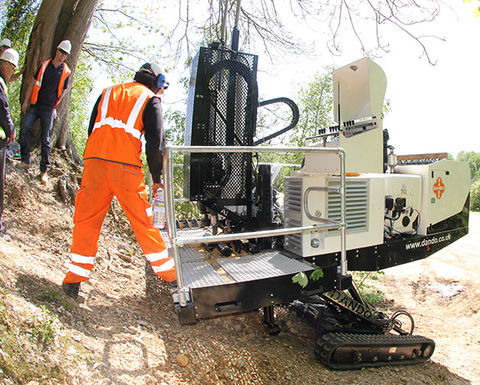 The track-mounted rig is capable of dynamic sampling, standard penetration testing and rotary drilling on inclines of up to 55°, as well as being fully compliant with UK and EU health and safety standards.

Dando designer Rupert Coler said: "Last year Dando's Dual Mast Terrier broke new ground by offering rotary and percussive drilling methods from two masts mounted side by side on the same small rig. We quickly realised that there was a market requirement for a rig like this, but with the additional capability of drilling safely on steep slopes."

An opportunity to manufacture the rig came soon afterwards when UK contractor Bridgeway Consulting commissioned a slope drilling rig for its work on railway embankments.

Utilising the Sauer Danfoss Plus+1 automated levelling system, the machine provides a vertical mast and horizontal deck and walkway on steep terrain. A longitudinal slewing mechanism allows for uneven ground between the tracks, compensating for roll up to 15°.

Coler explained the approach to ascending an embankment: "First you anchor cables from the on-board winch to a point high up the slope using so called ‘duck bill' ground anchors. These provide stability when ascending and tether the rig safely while drilling.

"The operator then tracks the rig forward while simultaneously pulling in the cable on the winch using a specially designed radio remote control unit. When you reach the desired location, the deck can be progressed toward the embankment on a scissor mechanism so that there is effectively no gap between the deck and the bank."

While the radio remote control is a necessary safety feature given the potential hazards of traversing inclines with heavy machinery, the rig also features a swing-out control console with manually operated drill controls and an illuminated digital blow counter for use when drilling.

Once the rig is in position, a walkway is hydraulically deployed to provide a safe, level work area for the drill team, and easy access to the workbench, sample storage boxes and drill mast.

Powered by a 27Kw Hatz silent pack diesel engine, the two-speed hydraulic top-drive rotary head can produce 362rpm for open hole drilling or coring, or alternatively be switched to 50rpm at 4189Nm of torque should the job require larger diameter drilling.

According to Dando, the Ibex is suitable for a wide range of variable geology, shallow drilling projects in the 0-50m range, where inclined topography is encountered. Day of the Jackal for Dando