Keeping it under control

Many construction and mining projects rely on groundwater-control techniques to allow excavation below groundwater level in dry and stable conditions.

In the past, it was not routine to consider the potential environmental impacts of dewatering and groundwater control. However, in recent decades, discussion and guidance has emerged on potential environmental impacts, with dewatering guidance documents being produced in the UK and in the Middle East, and these issues are now routinely considered.

This article describes the issues and potential environmental impacts associated with groundwater control in urban areas, where the restricted working space and the presence of neighbouring structures will influence the choice of methods, and discusses the requirements for monitoring and mitigation.

Groundwater control can be achieved via two principal types of methods: pumping and exclusion. A range of methods can be used to control groundwater as shown in Table 1.

The techniques most commonly associated with groundwater control are the pumping methods. These involve pumping groundwater from an array of wells or sumps (see Fig. 1) with the aim of temporarily lowering water levels to allow excavation to be carried out in stable conditions.

Pumping methods are also known as groundwater lowering, construction dewatering or simply dewatering. The amount of lowering of the groundwater level is known as drawdown.

Each group of methods (pumping and exclusion) has the potential to cause different types of environmental impact.

It is difficult to provide generic indicators of the risk of impacts. This is partly because the potential impacts depend on hydrogeological conditions, which are unique to each site. Additionally, the type of groundwater control methods used can have a key influence on the potential impacts.

One of the challenges of working in dense urban areas is that the project site is likely to be surrounded by neighbouring sites, which may have different sensitivities and vulnerabilities to impacts from groundwater control.

The potential for impacts has to be assessed on a site-by-site basis. Ideally, such assessments need some structure or framework, and the categories of impacts in Table 2 are suggested as an aid to planning and structuring the assessments.

The impacts listed in Table 2 are the direct impacts from interference with groundwater. There will also be indirect impacts (such as noise, emissions from plant, etc.) associated with physical construction, such as well drilling or pumping. These are not discussed here.

Geotechnical impacts: where the geotechnical properties or state of the ground are changed by groundwater-control activities.

The most common impact in this category is ground settlement, with the risk of distortion and damage to structures, services and other sensitive infrastructure. Ground settlement can be caused by two principal mechanisms:

Contamination impacts: where pre-existing ground or groundwater contamination is mobilised and/or where transmission pathways are created.

Many urban sites have a legacy of former industrial uses, which may have left behind contamination in soil or groundwater. Groundwater contamination can be mobile under the effect of hydraulic gradients and can migrate away from the source.

In some cases groundwater contamination from a neighbouring site may reach the pumping system (and emerge in the discharge water) within a few hours of pumping, while in other circumstances it may be weeks or months before the contamination emerges in the system.

Water-feature impacts: where groundwater flows, levels and/or quality are affected in water-dependent features (both natural and artificial features).

This primarily relates to the consequences of lowering of groundwater levels or changes in flow pattern as a result of groundwater-control works. An obvious example is pumped groundwater control near natural water-dependent features such as wetlands (where water levels may fall due to increased seepage losses) or springs (where flow rates may be reduced).

Artificial features, such as archaeological remains, might also be detrimentally affected by lowered groundwater level, and this may need to be considered.

Even if groundwater pumping is not planned to be significant, low-permeability cut-off walls used for groundwater exclusion can also have impacts. Groundwater levels may rise on the upgradient side and fall on the downgradient side (Fig. 3).

<strongwhere water availability or water quality are affected either at defined abstraction points (wells or springs) or in known water-resource units (aquifers).

While groundwater is often viewed as a ‘problem' for a construction project, that same water may be a resource used by others for purposes such as drinking, irrigation, agriculture or in industrial processes.

For large dewatering projects it is important that a review of nearby groundwater uses is carried out so that the potential impact on water-resource use can be assessed if necessary.

Other impacts may affect water quality (the chemical makeup of the water), for example, by drawing in saline water from coastal waters or drawing in poorer-quality water from abandoned mine workings.

Discharge impacts: where the discharge of water from pumping systems impacts the receiving environment (surface water or groundwater, where recharge wells are used).

Where water is pumped, it must be disposed of, potentially creating a range of impacts. The most common impact is where discharge water has a significant sediment load. When discharged to surface watercourses, the sediment will be harmful to aquatic life and can build up in ponds and channels, affecting hydraulic capacity.

If groundwater is pumped from or near a contaminated site, the discharge water may be contaminated and require specialist treatment before discharge.

Monitoring and mitigation should be used to identify and measure (through monitoring), and then minimise and control (through mitigation) the potential impacts from groundwater-control works.

However, where environmental impacts are assessed to be of concern, then operational monitoring assumes even greater importance. Potential monitoring parameters for monitoring are given in Table 3.

Mitigation measures must be developed on a site-specific basis, but can include:

A range of environmental impacts can result from groundwater control, even if pumping is not involved. Categories presented in this article can be useful to classify potential impacts to help identify sites and projects that may be significantly impacted.

Monitoring and mitigation measures can be used and should be based on a sound hydrogeological conceptual model developed from the available site investigation data, ideally including a desk study. 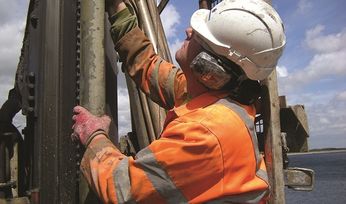 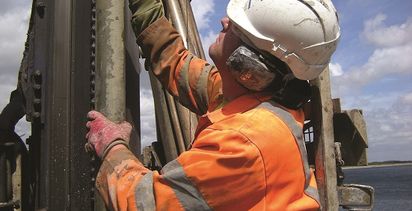 Orica launches the next generation of its BlastIQ digital platform