Automated functions and remote operation are becoming par for the course on modern drill rigs. GDI asked manufacturers about the level of automation of their products and what’s next in line for smart tech 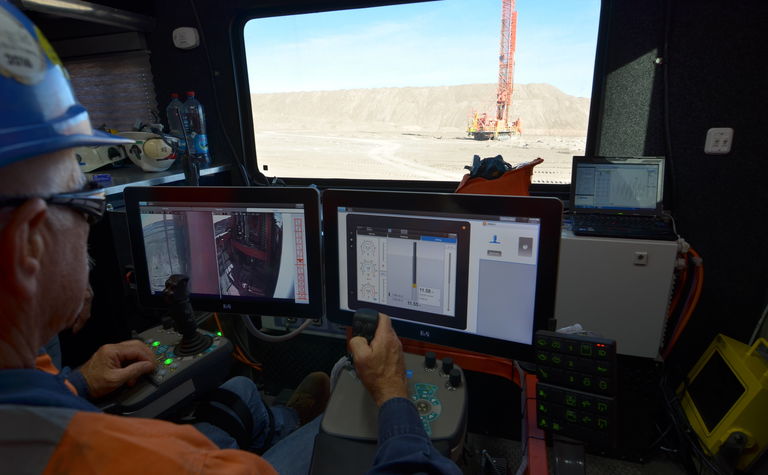 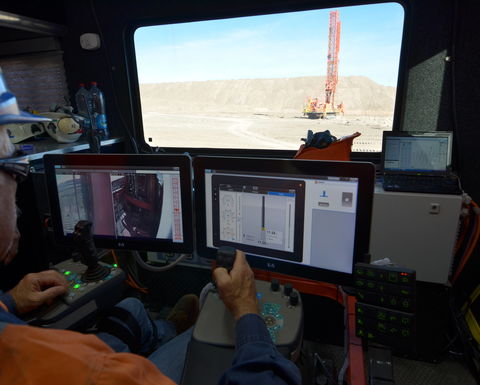 As drilling equipment manufacturers develop new machinery and add intelligent features, the main aim is always to make the whole process safer, more productive and user-friendly. However, changes in drilling technology also mean changes in work processes, and some drilling companies are ready to take the big leap, while others want to take it step by step.

From radio remote control and rod handlers, to increasingly automated features and rigs, all the way to semi- and fully autonomous drilling, the trend is clear. These different levels of control and automation are appearing on machines for all applications, from geotechnical and mineral exploration, to surface blasthole and underground drilling.

Boart Longyear, for one, is taking a measured approach to automation.

"Machines aren't designed to do everything, and full automation requires significant investment. Thus, we approach automation one process at a time."

This involved automating functions on existing drill models and looking at steps in the drilling process that require regular human intervention.

"An early focus for us was on mechanising and automating rod-handling processes," explains Strauss. "In the past few years, we have rolled out a range of advanced and patented rod presenters and handlers that partially or fully mechanise rod handling, which removes drillers from the hazards associated with those tasks.

"Our DCi [Drill Control Interface], introduced in 2013, is a fully electronic interface that allows one operator to control both the drill rig and the rod handler. The DCi incorporates CAN bus [Controller Area Network] technology to enable communication between the drill rig, the rod handler and the DCi to self-monitor and semi-automate most drilling operations."

This system provides immediate feedback on drilling conditions and records a range of data for reporting and analysis. According to Boart Longyear, sensors provide a real-time status on rotation speed and pressure, feed and holdback pressure, water flow and pressure, penetration rate, bit force, diagnostics and alarms."

Sandvik, in turn, has been delivering automated drills since 2007, into both underground production drilling and surface drilling for blasthole drills.

"In surface drilling, we started with a partner solution, but now that drills are becoming even smarter, we are now offering our own solution, based on our AutoMine platform for all Sandvik surface drill product families."

When Atlas Copco launched the first generation of the digital Rig Contol System (RCS), it says it created the path for all its future development within automation.

"This has been a successful base that already from the start included digital drill plans with one- and multi-hole automation capabilities for the drill rigs," comments Johan Jonsson, global product manager, face-drilling equipment (Boomer range). "The RCS has then been developed further on and we have now reached the fifth generation."

He adds: "Our digital drill plans (ABC Regular) have helped our customer to actively reduce their overbreak and achieve smother contour of their underground operations all over the world.

"During the years we have added on options like the Tunnel profiler that enables the automatic scan of the tunnel or mine roof and calculate over- or underbreak. We have also developed an automatic rig navigation function based on total station technology. This option enables the rig to automatically calculate its position underground, so that it ‘knows' where it is located.

"For our Simba production series drills we have the possibility to remotely control the drill rigs from either surface or underground control rooms. That helps the customer to drill over shift changes, in hazardous areas or during blasting. By drilling over shift changes or blasting periods the mines are able to achieve more drill hours and metres on the already installed fleet."

Klemm Bohrtechnik, a manufacturer of equipment for special foundations, has been offering remote-controlled drilling rigs since 1986 In 1997, it used fieldbus technologies for the first time, and initial solutions for partial automation were implemented, and, in 2002, radio remote controls were used for the first time.

Since 2012, the company has been developing and using scalable, universal radio remote controls. In the case of new developments, only electrical controls have been designed since 2014. In order to simplify the transition from conventional hydraulic control panels, electric control consoles are nowadays available.

Klemm now also offers universal remote controls, which provide the operator with precise feedback of the machine status. These include hydraulic pressures, mast tilt, error messages and so on.

"For our Boomer face-drilling range we have launched the ‘Dynamic tunnelling package' that enables the customer to create the drill pattern directly on the screen in the drill rig instead of predefined drill patterns from the office," states Jonsson. "This a function that both increases the precision of the drill plans; due to that it is always based on the planned contour in-front of the drill rig instead of an expected theoretical position, and also saves time as you don't have to travel up to the surface to get the new drill patterns."

With more on-board automation functions on a drill rig, the operator can be more productive and achieve more drill metres.

"By having our automatic between-the-hole-movement for our face drill rigs (ABC Total), the operator is able to, for example, let one boom drill in automatic mode in order to focus on the other boom that might be drilling in a difficult or fractured area, something that requires more attention. With this option the second boom will not be standing idling, but will instead produce metres.

"We also see other cases where underground mines and tunnel projects have a hard time recruiting the right people for their operation. With less experienced operators, the machine has to be smarter and compensate for that. To address that, much of our development has focused on operator assistance functions and intuitive control systems."

It has combined technology from its most popular surface coring drill rigs to create the LF160. When paired with the FL262 Freedom Loader, the LF160 combination is suitable for contractors who want to target sophisticated surface drilling exploration contracts that stipulate some of the highest safety standards, without compromising on productivity.

"The LF160 and Freedom Loader combination is one of the industry's first 100% hands-free rod handling solutions," claims Strauss.

The Freedom Loader can cycle 6m rods in the same amount of time as a manual cycle, which means enhanced safety is achieved without compromising productivity. The LF160 and Freedom Loader combination adheres to today's rigorous CE standards. According to Boart Longyear, with up to 1,800m of NQTM capacity, the LF160 can meet the demands of most diamond-coring projects.

Sandvik now offers AutoMine Surface Drilling together with its Sandvik DR461i blasthole drill rigs, enabling one operator to operate up to three drills. It includes fleet control and safety systems, and there is no limit on the distance from the drills to the operating centre.

"The system is designed to take full benefit of all of the smart automated features in the drills, such as automated drilling control," says Eerola.

"The main benefit lies in the reduction in the number of people in the drilling area or hazardous areas. The consistent performance and high accuracy achieved in production drilling via automation makes our customers' mining processes more efficient. For underground, we offer tele-remote drilling for Sandvik DL400 and Sandvik DL300 series production drill rigs."

No matter the speed at which companies are moving towards automation, devices are certainly becoming smarter. While some customers of drill rig manufacturers are already striving towards full autonomy in machines, many are increasing the productivity in their drilling equipment, by step by step adding on different operator assistance or automatic functions.

"In the mid-1990s, Klemm thought that there would be an autonomous device at the beginning of the new century," they add. "At that time, we did not intend to do that without the operating personnel completely. However, automation technology from the stationary industrial sector can only be used to a limited extent in the mobile world.

"If we look at special foundation engineering, then from today's point of view the development of a completely autonomous working tool is not yet foreseeable, because the drilling tools, their drilling tasks and the conditions in the field are very different. Of course, there are highly automated drilling rigs or underwater exploration drilling technology, but remote monitoring by an operator is also necessary here."

Atlas Copco says it is continuously working with the different bottlenecks in the drilling cycle to first mechanise them and then also automate them.

"We are also looking into more smartness in some of the more traditional manual drill rigs, like with the Boomer S2," says Jonsson.

"On this rig we included a lot of functions and smartness that previously only has been offered on the larger range of rigs. We can already today automate part of the cycle; the long-hole drilling/production drilling (Simba range) machines can for example be fully automated or remote controlled from the surface.

"If you look at the bigger picture and include service and maintenance as well, it will be harder to automate those functions. We will see people working underground for some time, but the underground crew will step by step be moved to surface/control room work."

Boart Longyear continues to focus on further removing drillers from the hazards of working with the machinery. For example, moving drill control panels away from where the drill is operating. "The goal is to keep the drillers and the helpers further away from the hazards - which include but are not limited to rotating machinery, high-pressure hydraulic hoses and hazards associated with over-head falling objects," comments Strauss.

Eerola adds: "I see the technology moving in several directions. Drill rig machine design, combined with evolution of the sensing and intelligent controls will make actual drilling of the holes more efficient and reliable.

"It will also become more autonomous throughout the whole drilling cycle, from collaring through to hole finish in different ground and rock conditions. Another development is likely to be the sensing and mapping of the environment of the work area, using sensors and equipment such as drones to tram and operate the rig autonomously in uneven surfaces and where obstacles are present.

"Autonomous drilling of a well-prepared bench for one drill pattern is already a reality in today's surface drilling and full-fan drilling in underground for long-hole drilling."

No matter the amount of automation, operators will never be completely out of the picture. Drilling rigs require servicing, refuelling and new consumables. The process of drilling requires skill and experience, so operators are still needed, but they no longer need to sit in the cab or stand right by the machine. 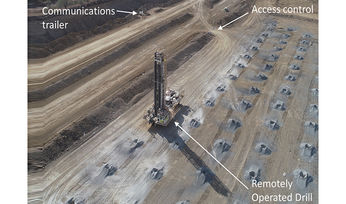 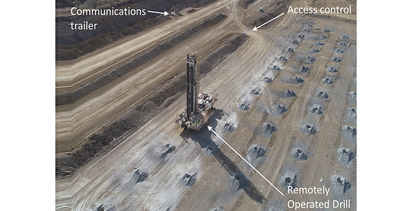