Geopier’s Mike Pockoski shares with GDI examples of where the company’s GeoConcrete Column system has been used to provide innovative foundation solutions. 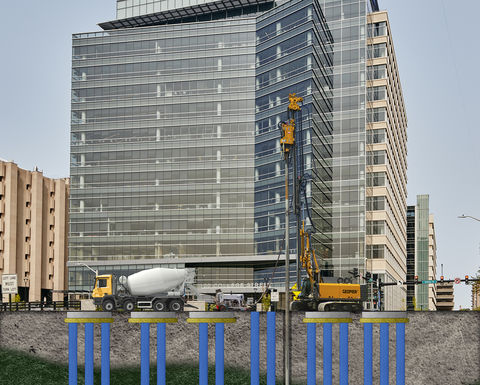 Geopier GeoConcrete Columns (GCC) provide a cost-effective solution to support heavy loads and control settlement at sites with weak, compressible soils. The Geopier rigid inclusion system is installed by driving a displacement mandrel down to a dense bearing stratum. The mandrel is filled with concrete, and the closed system allows for project-specific pressurization of the chamber to deliver exact quantities of concrete to meet project design requirements. The mandrel is raised up and down successively to build an expanded concrete base to optimise load transfer into the bearing layer.

Following base construction, the mandrel is withdrawn while maintaining a positive internal pressure to expel the remaining concrete to construct the element's shaft. The resulting GeoConcrete Columns then support engineered footing pads and high-bearing pressure shallow footings or mat foundations to provide settlement control. GeoConcrete Columns are an effective replacement for deep foundations including driven piles, drilled shafts or auger cast-in-place piles. They can also be engineered to support fill, slabs, and heavy aerial loads in lieu of other expensive options like lightweight fill or time-consuming surcharging.

The project team faced a variety of geotechnical challenges including the presence of urban fill, soft organic soils, compressible natural sand/silt and a relatively high groundwater table. Supporting footings and slabs directly on the existing unimproved soils would have led to excessive settlement, and deep foundation options were cost and schedule prohibitive.

The use of RAP and GCC elements allowed for traditional shallow footings and slab-on-grade construction and expedited the project schedule. The GCCs were designed to limit the total and differential post-construction footing settlement to less than 1-1/2in and 1in respectively within the GCC-improved zone, and provided a maximum allowable footing bearing pressure of 9,500lb/ft2 They were installed using a displacement technique that did not require dewatering and did not generate excess spoils, ultimately reducing the dewatering premium and off-site soil disposal costs.

The contractor on the project, Helical Drilling, Inc., installed more than 900 GCC and 100 RAP. Helical's designer engineered a structural footing pad beneath the footings to help transfer footing stresses to the GCCs and surrounding matrix soil. The footing pads also provided a stable sub-grade for footing construction.

Geopier's GeoConcrete system was also selected for support of the Grand Condos project in Canada.  The Grand Condos is a 12-story condominium structure with two levels of below grade parking, comprising Phase 2 of a project situated on the banks of the Grand River in Cambridge, Ontario.

Subsurface conditions at the Ontario project consisted of 7 to 18ft (2 to 5.5m) of very loose silt fill underlain by very loose silt (with organics) to a depth of 20 to 27ft (6 to 8m) followed by dense sand and gravel. Groundwater was consistent with the level of the adjacent river at a depth of about 7 to 22ft (5 to 7m) from the existing grade.

The project team required a cost-effective foundation solution that could be installed with minimal delays to the project schedule. Based on the highly compressible nature of the soil profile, the geotechnical engineer recommended that the structure be founded on a deep foundation system with pile caps, grade beams, and structural slabs. However, due to installation difficulties and schedule delays of helical piles during Phase 1 of The Grand development, additional concerns for the project schedule led the project team to seek an alternative approach.

Ultimately, the Geopier GCC system was selected for its cost, speed of installation, and ability to provide for high bearing capacity footing support. The foundations of this structure were subject to column loads of up to 1,500kips (6,675kN) and mat pressures of up to 8,000lb/ft2 (380kPa). The Geopier system was designed to limit total settlements to less than 1in and differential settlements to less than 3/4in.