Given that Bauer is a business that was founded in Germany it should come as no surprise that the company has been involved with specialist foundation work in two of the countries largest cities. 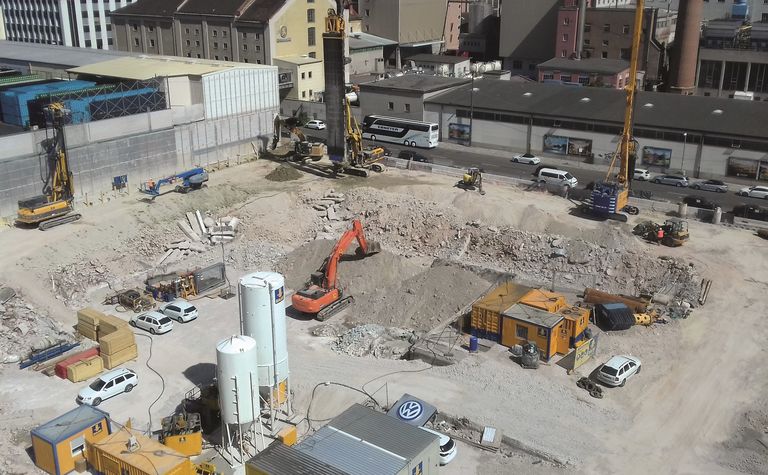 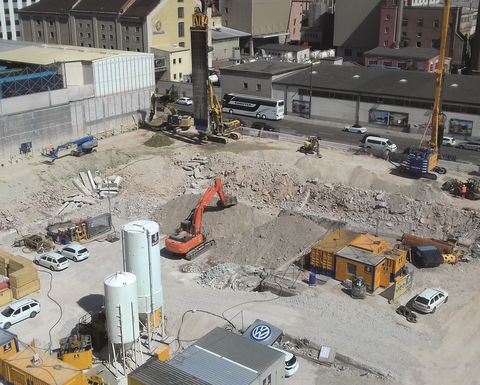 As part of the KARL project, Bauer was commissioned to carry out a range of specialist works for building a deep excavation wall anchored in multiple layers

Bauer Spezialtiefbau has been a major driving force in the development of specialist foundation engineering and executes excavation pits, foundations, cut-off walls and ground improvement all over the world.

Headquartered in Schrobenhausen, Bavaria, the company operates internationally, but still generates around 22 per cent of the group revenue through domestic projects. Among these, two projects that are currently being carried out are in the two largest cities of Bavaria.

In the heart of Munich, in the Maxvorstadt district and right by the studio of Bayerischer Rundfunk, Bavaria's public broadcasting service, a new office complex is being built on the former premises of car dealership and service company - Münchner Automobilhandel und Service (Mahag). The new business quarter, known simply as ‘KARL', was designed by leading British architect David Chipperfield, whose most famous works include among others the Neue Museum in Berlin. The 7,500m² site is to have a two-level underground car park, a green rooftop terrace, a restaurant, offices, and a courtyard that will be accessible to the public, created by famous Swiss landscape architect Enzo Enea.

As part of the project, Bauer was commissioned by the client KARL München GmbH & Co. KG to carry out a range of specialist foundation engineering works for building a deep excavation wall anchored in multiple layers. To this end, 380 individual replacement bores, reaching a maximum depth of 10m, were firstly drilled using a Bauer BG 30. Here a total of approximately 2,000 drilled metres were backfilled. To lower and regulate the groundwater, a dewatering system was installed in the form of wells. During the works, old sheet pile walls and steel girders were also found, which had to be removed as an additional measure.

Construction of the approximately 4,200m² mixed-in-place (MIP) wall could then be started. This task involved using an RG 25 S as a drilling rig and an RG 16 as a vibratory rig, to produce the MIP elements, with a diameter of 550mm and down to a depth of 15m. Due to the high loads to be exerted by planned subsequent building development, the MIP wall was secured with up to four anchor layers, using the twin rotary drive method. Overall, approximately 4,500m of anchors were built, with the aid of a Klemm KR 806-2 DK, where the length of the anchors ranges between 15 and 21m and the number of strands vary between four and seven. Bauer also created a sheet pile wall anchored in one layer to act as a supporting structure for the ramp area.

In Nuremberg, the second biggest city in Bavaria, in the immediate vicinity of the historical centre and in direct proximity to the main station, a modern commercial complex named Tafelhof Palais is under construction, on the site of the former main post office. The landmarked rotunda of the historic main post office, built in 1924, is to be integrated into the new building with a natural stone facade. Two towers with ten or 13 above-ground storeys, as well as two connecting building blocks each with seven floors are planned.

Bauer was commissioned with the execution of various specialist foundation engineering work. The demolition of three vacant buildings and the excavation of 125,000m³ of soil up to a mean excavation depth of 10m were carried out, together with the joint venture partner Reithelshöfer. A total of approx. 250 anchors, with a total length of 3,350m, as well as 1,200m² soldier pile wall with double U profile and 640m² light profile channel boards, were completed. In addition, 52 steel reinforcements, with a maximum length of 17.5m and a total weight of 150t, 650m³ jet grouting and approximately 370 bored piles, with diameters of 620mm and 750mm, were installed to a maximum depth of 14m. Various types of machines were used in the work, including a Klemm KR 806-2B for anchor work, an IB18 for jet grouting, a Bauer BG 24H, a BG 28 and a BG 20 for the remaining work.

The shell construction of the complex started in September 2018, with the specialist foundation engineering scheduled to be completed in early 2019. In addition, the LEED Gold certification for sustainable real estate is being sought for the new building.

The disposition of the new buildings and the integration of the historic rotunda will create a passage-like courtyard situation with usable areas for gastronomy. With a total lettable area of just under 50,000m², the building complex will house two hotels, offices, a post office and commercial space for retailers and service providers after completion in 2021. In addition, a two-story underground car park with more than 100 parking spaces is planned.

Bauer is once again working with A.P.Moeller Foundation on a construction project in Copenhagen 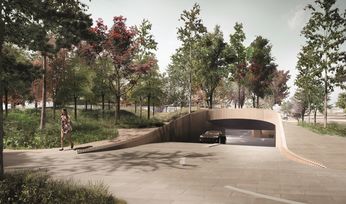 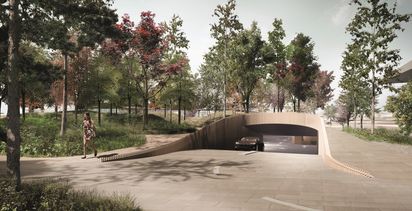 Offshore piling - striking down on noise