Comacchio used Bauma as a showcase for its line of rigs dedicated to large diameter drilling. At the construction industry event in Munich, Germany, the company was displaying its CH 450 in WPD (Winch Pull Down) configuration alongside the CH 300 which was making its international debut. Comacchio debuted the CH 300, the latest addition to its large diameter drill rig range, at Bauma

"The Comacchio stand at Bauma 2019 was been relocated to the North outdoor area and this gave us the opportunity to expand the stand layout and to have a larger exhibit area for the equipment. This allowed us to give greater visibility to our CH line rigs for large diameter drilling, thus reflecting the development of the company since the launch in late 2015 of the first unit of this range, the CH 450. In the four past years the company has invested a lot in the expansion of this range and we chose Bauma 2019 for the launch of the latest addition to our CH line of piling equipment - the CH 300," said Flavio Durigan, sales manager of Comacchio.

The CH 300 is the smallest model in the CH range with a transport weight of 30t with the rotary head and Kelly bar installed. Just like its ‘elder sister' the CH 450, the CH 300 is fully self-erecting. Once on site, the rig can be off loaded from the truck and set up without the need for a crane with the help of automated rig-up systems. The lateral extensions of the undercarriage allow for reduced dimensions during transport and ensure, when opened during operation, good machine stability. These features allow easier transport operations, reducing the high mobilisation costs usually associated with this kind of equipment.

Despite the lightweight design, the CH 300 offers a high torque output, allowing it to undertake drilling tasks that would normally require the use of larger and heavier equipment. The CH 300 can be configured both for uncased bored piles (excavated by dry method or stabilised by fluid overpressure) and cased piles (where the casing installation is carried out by rotary drive), up to a maximum depth of 48.5m (159ft). The rig can be easily converted to perform CFA drilling with augers of 1,000mm maximum diameter and a maximum depth of 19m (62ft).

"The CH 300 is designed to be robust and reliable, thanks to the use of high-strength steels that allow us to reduce the weight without sacrificing performance and reliability on site. The design of the CH 300 incorporates a number of features aimed at enhancing efficiency and cost-effectiveness. This unit is the first one of the CH range to be equipped with an innovative high-efficiency hydraulic system that significantly reduces fuel consumption," explained Durigan.

With a view to improving energy efficiency and environmental sustainability, the engine cooling system has also been optimised by Comacchio to control heat dissipation according to the actual operating requirements of the machine, which translates into reduced emissions and lower fuel consumption and noise levels.

"The CH 300 displayed in Munich is equipped with a Stage III engine, but the rig can be also offered with a Cummins B 4.5 engine, designed to incorporate the highest standards of environmental sustainability, both at European and North American levels. To meet the new emission regulations and particle number emission limits, the CH 300 features Stage V technology (EPA Tier 4 Final) including DPF, SCR and urea dosing combined in a single module after-treatment system that takes up less space and weighs less than prior systems," continued Durigan.

Attention has been paid to the operator's comfort and safety, too. The CH 300 stands out for its ergonomic design and high level of safety. The roomy cabin, which is fully-glazed and equipped with a sliding door, is the only one in the segment to have obtained the TOPS and FOPS-1 certification. The workspace is adjustable and uses levers and capacitive manipulators, as well as a colour, 7in, touch screen display connected to the CCS system: a user-friendly control software designed entirely by Comacchio, which controls the drilling parameters and allows for the complete management of the machine, including diagnosis of any error. 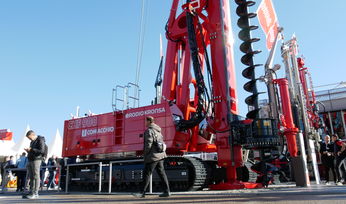 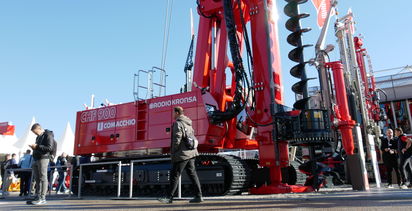