After a total construction time of only 16 months remediation work on the lake Forggensee reservoir dam in Rosshaupten has been successfully completed. To mark the end of the works, which included a new street along the dam crest (including walking and biking paths) and other construction projects, the Rosshaupten reservoir dam, in Bavaria, Germany, was re-opened in September during a festive ceremony. After welcoming the attending dignitaries, Dr Klaus Engels, director operations Hydro Germany at Uniper, praised the extraordinarily fruitful and effective cooperation of all those involved in the project and expressed his thanks. Dr Rüdiger Detsch, director of the Bavarian State Ministry of the Environment and Consumer Protection, drew attention to the special significance of lake Forggensee as the "Pearl of the Allgäu" and praised the work by Bauer Spezialtiefbau GmbH, which went above and beyond in this project.

Uniper Kraftwerke GmbH commissioned Bauer to create a 13,500m² diaphragm wall to seal the dam. However, this project posed a particular challenge as the diaphragm wall could only be built from the very narrow 11m wide dam crest. To make things more complicated, the crest was located unfavourably on the side of the dam rather than in the middle.

The diaphragm wall, which is 1m thick and 70m deep, includes socketing into very hard rock and was executed in two steps. First, excavation of the upper 40m of the dam body was carried out with the help of a diaphragm walling grab on a Bauer MC 64 duty-cycle crane. The remaining 30m, beneath the actual dam body, was excavated using a trench cutter on an MC 96 duty-cycle crane. Bauer carried out the construction work for the diaphragm wall seven days a week in day and night shifts - in other words, 24 hours a day.

During the ceremony, Thomas Bauer, chairman of the supervisory board of the Bauer Group, praised the outstanding work by the entire construction team and thanked all the participants for their excellent cooperation. He expressed his pride in the fact that Bauer, after completing the Sylvenstein reservoir, had the chance to remediate yet another reservoir dam in Bavaria. District administrator Maria Rita Zinnecker also underlined lake Forggensee's great importance to the region and ended her welcoming address with well wishes for the new dam seal, the entire region, and lake Forggensee itself.

Idyllically located near Neuschwanstein castle, in an area known as the "king's nook" in Bavaria, lake Forggensee is fed by the Lech river and serves as both a local recreational area and a tourist destination. The fifth-largest lake in Bavaria and the largest reservoir in Germany in terms of area, it also generates electricity and provides flood control when the snowmelt begins in the Alps. To prepare the power plant and the flood control for the future, the dam seal was renovated by Bauer Spezialtiefbau. 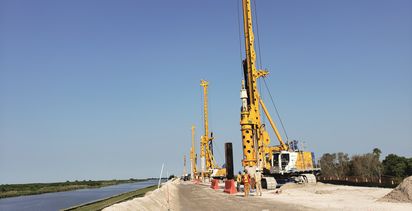 Bauer goes back to Bhutan