During the construction of a port in Russia to service the growing LNG industry, the Robit Steel Fist system was used to penetrate granite rock in the Kola Peninsula. In the coming years, the use of liquified natural gas (LNG) in transport and industry is expected to grow significantly. That is a key reason why earlier this year, a Robit Steel Fist pilot bit started to penetrate granite rock in the Kola Peninsula.

As far as fossil fuels go, LNG is by far the most environmentally friendly - it has the lowest CO2 emissions per unit of energy while also having the highest heating value. Thus, it has big potential as a future transport fuel alongside biofuels, hydrogen and electric mobility, and most major fossil fuel companies have begun investing in it.

Russia has the largest natural gas reserves in the world. The bulk of those reserves are sitting under the permafrost in northwest Siberia, in the Yamal Peninsula and its offshore areas. In recent years the region has seen a massive investment in the so-called Yamal project, a joint venture between Russian, French and Chinese companies, which includes a huge LNG plant, in operation since 2017.

The Yamal project is now being followed by the Arctic LNG-2, another major international joint venture, located in the neighbouring Gyda peninsula. It has an ambitious plan to cut the production costs by placing the LNG production plants offshore in the Gulf of Ob on so-called gravity-based structures (GBS). These reinforced concrete structures are built in a shipyard, towed to the intended location, and then sunk onto the seabed.

Until recently, Belokamenka was a small village just north of Murmansk in the northwest corner of Russia. In 2017 it was chosen as the location for the new shipyard where the GBS are to be built. This means a massive transformation in the area, covering more than 150 hectares. The shipyard will have two dry docks, each 400 x 175m, the largest in Russia. Currently, the construction site employs some 4,000 people.

The construction of pipe pile walls for the dry docks is being undertaken by NK-Teplokhimmontazh and the drilling contractor Spetsfundament Plus. It involves the drilling of no less than a thousand piles, up to 32m deep, through sand and loam into the granite bedrock. Their tool of choice for this down-the-hole job is the large diameter Robit Steel Fist casing system. Drilling work on dry dock #1 is now completed and will continue into 2020 on dry dock #2.

In 2022, the first GBS built in Belokamenka is expected to start its 1,600km voyage, with the help of a powerful tugboat fleet, across the Barents Sea to its destination in the Gulf of Ob. The longest piles were drilled up to a depth of 28m with the last 2-3m being into bedrock. The piles were first driven until refusal and then the contractor cleaned the piles inside with an auger and then drilled to the required depth.

Robit equipment used on this part of the project included:

In addition, four compressors were used to provide 120m3 of air per 10.5-bar of working pressure in the system during drilling. The pressure did not rise above 11-bar.

The contractor also had to deal with strong water cut up to 15m a column of water.

Drilling work is progressing on the pipe pile wall at the Dry Dock # 2 facility.

While the geology is similar to Dry Dock # 1, the maximum depth the 80 piles already drilled have is 32m. To reach that depth the construction crew is drilling through 25-28 meters rocky soil, granite fraction ts quartz 0-200 mm, sandy loam, loam, sand.

On this site, five compressors are providing 145m3 of air per 12-bar of operating pressure in the system during drilling and the pressure has not risen above 14-bar.

Following a dry-dock overhaul to install a drill rig, Geoquip's Saentis has begun its maiden voyage 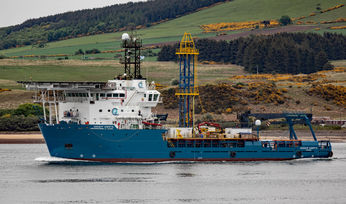 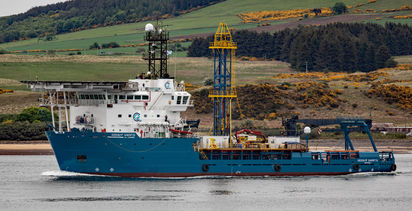