Driving a variety of piles into seabed rock is the latest application for BSP International Foundations’ heavy-duty CX579 impact hydraulic piling hammer when it was put to use at a harbour extension project in Ireland. 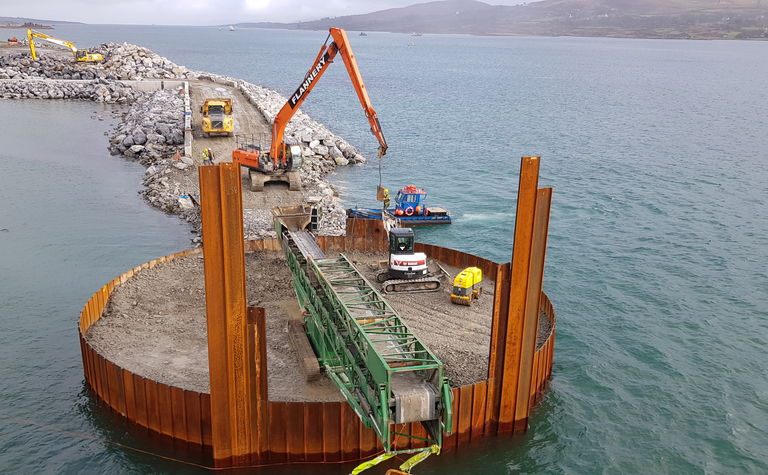 All around the UK and Irish coasts, commercial ports and harbours are investing substantial funds to improve and extend services, create new terminals or building additional facilities to cater for a projected increase in traffic and larger ships.

One of the latest harbours to benefit from new investment is the Dinish wharf extension project on Dinish Island located adjacent to the town of Castletownbere in south-west County Cork.

Castletownbere is the largest white fish port in Ireland with up to 70 fishing boats working out of the port and up to 20 European fishing boats landing a large range of fish types on the quays on a weekly basis. The port is located on the south side of the Beara Peninsula in West Cork on the South West coast of Ireland.

The port has an inner harbour around which the town of Castletownbere is built. The outer harbour is called Berehaven, which was an old British navy port up to 1938 and is said to be the second safest natural harbour in the world, with seven miles of safe anchorage.

The value of the contract for the Dinish project represents the country's largest-ever capital investment and is being co-funded by the Irish Government and the European Union. When completed it will offer significantly improved access for boats engaged in the fishing industry.

County Clare-based civil and marine engineering contractor, Keating won the contract and it is enjoying continued growth in the civil engineering and marine construction market. It is expanding through winning a number of significant marine projects and a joint venture with Roadbridge completing €120 million of new construction work in Dublin Port.

Keating's contract is for the construction of the new wharf facility and associated works, and is comprised of the construction of a 216m landing berth, the development of 0.9 hectares of highly usable reclaimed quay, a storage area and two new breakwater structures at the entrance to the harbour.

Ancillary works include the provision of water, electrical and fuel services, and a new draining system. In addition, heavy-duty pavement surfacing leading to the new wharf/quay structure area, relocation of existing navigation lights and directional lighting. Revised security and access arrangements will also feature CCTV and the provision of quay furniture and all associated marine facilities are also included.

Following planning, personnel and equipment mobilisation, Keating commenced work on the project in September 2018 with the construction programme scheduled to be completed in March this year.

Dublin-based Gavin and Doherty Geosolutions (GDG) worked closely with Keating to develop a design for the wharf extension comprising a 168m long suspended quay wall supported on 39 tubular steel piles 1,016mm in diameter and 20m long with some 15.5m long and driven to minus 11m into a socket of 2m in places. All are connected by a suspended concrete deck which in turn is supported by an inner retaining wall constructed with 350 PU Arcelor 32 sheet piles 21m long driven to varying depths of 4m to 14m. The southern section of the wharf comprises a 48m long berth with three suspended deck spans.

According to GDG, this layout has been designed to dissipate wave energy and to minimise wave propagation along the quay wall

To accommodate larger vessels up to 100m in overall length part of Keating's contract involved the dredging of approximately 57,000m3 of seabed material adjacent to the new quay to form a 40m wide berthing pocket at a depth of minus 8m chart datum (CD). In addition, dredging of the existing navigation channel was also carried out to a depth of minus 6.5m CD with approximately 17,000m3 material dredged. All the dredged material was used as infill behind the inner quay wall and around the site and reclaimed area. 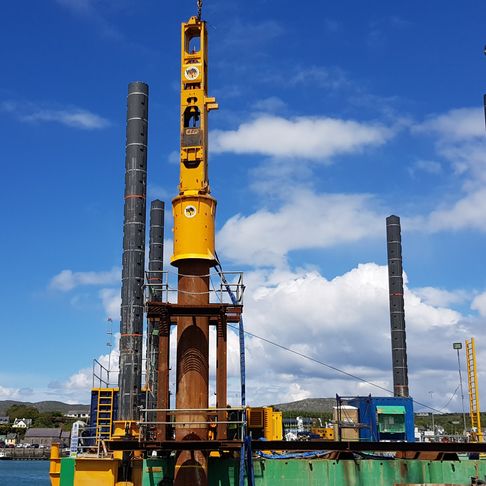 The CX579 hydraulic hammer is a new model manufactured by BSP at its facility near Ipswich in Suffolk. It has been designed to drive a wide variety of tubular steel bearing and sheet piles, combi piles, H-section as well as reinforced, prestressed concrete piles. A significant feature is the hammer's versatility as the drop-weight can be easily altered from the standard 5t to 7t or 9t depending on the requirements of the application.

Apart from the inclement weather conditions one of the main problems for the contractor during piling was the varying seabed rock levels.

Following the pile installation, Keating cut down the piles, installed top hats to support the precast concrete units, placed soffit plates within the piles for the pile plugs as well as concreting and installing precast units for the quay.

The development of the new wharf is a very significant investment for the south-west of Ireland and will be a big boost to the Beara Peninsula and West Cork in general. The project will support the local economy and double the workable quay space on Dinish Island and Castletownbere and will enable significant expansion in fish landings, onshore processing and general marine activity at this major Irish port. 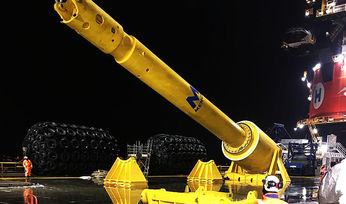 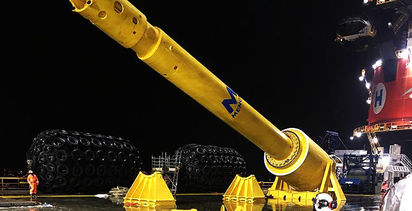