Potash salts are an essential part of fertilizers. In many regions of the world, potassium salts are extracted from large underground deposits left behind by dried-up prehistoric seas. 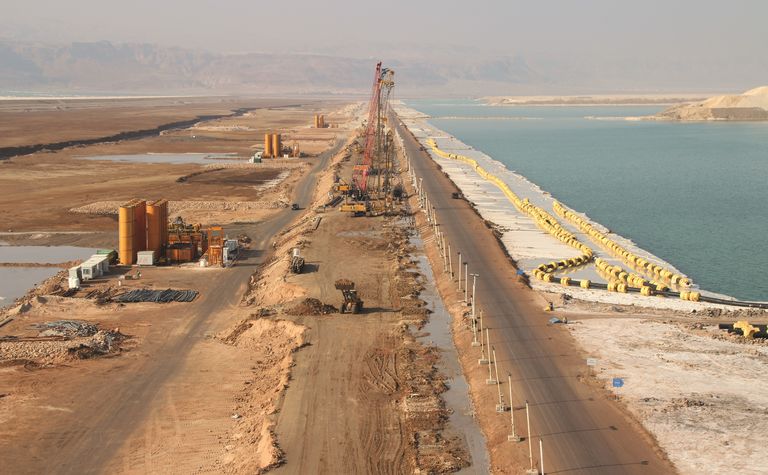 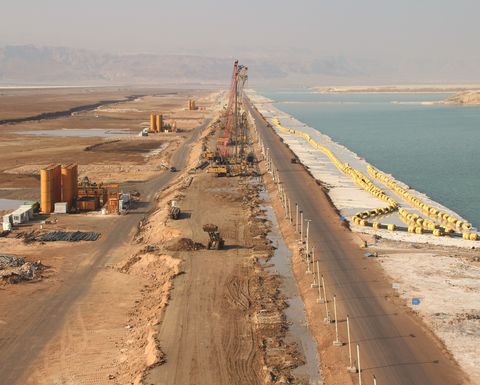 Despite restrictions imposed by the COVID pandemic, Bauer was able to complete a dam remediation project in Jordan ahead of the planned schedule

The Dead Sea is also rich in potash salt and the Arab Potash Company (APC) in Jordan uses this natural resource as the basis for the production of Carnallite. This is obtained in several earth basins with an area of 112km2 at the southern end of the Dead Sea, in which the pumped salt water evaporates and the much sought after the raw material is left behind.

What is special about this operation is that the basins are located around 400m below mean sea level and therefore at the lowest point on earth (above water). However, the dykes that surround the basins have become porous over time and must now be repaired.

In 2018, Bauer International FZE, a subsidiary of Bauer Spezialtiefbau GmbH, was commissioned to build around 112,000m2 of cut-off wall over a length of 4.2km on one of the main dykes.

In the subsequent preparation phase, Bauer FZE managing director Georges Abdo built a complete construction site organisation from scratch in the Jordanian desert - Site Group, a Bauer subsidiary, was already present in the country and actively supported its colleagues.

The project actually started in April 2019 and entertained interesting challenges: on the one hand, the work on the cut-off wall had to be carried out in just 16 months. On the other hand, complicated logistics, mobilisation of specialist staff, harsh weather conditions, an extremely salty environment and other factors made things more difficult.

The subsoil presented a special challenge: due to the hard crystalline salt layers, two cutters had to be used instead of grabs to build the cut-off wall.

In addition, the high salt content had a negative effect on the support fluid and the setting properties of the concrete. Nevertheless, Bauer experts solved this problem and developed support fluids for the two-phase system based on salt-resistant clay mineral and polymers. Various worldwide deposits of bentonite were tested until a suitable composition could be developed.

"The trustful and highly cooperative relationship with the owner, who provided all his remarkable support, was a crucial factor in overcoming a multitude of administrative and organisational hurdles," reported Abdo. Notably, all problems were solved.

A further challenge was posed by coronavirus as it reached Jordan. During the lockdown, and after a compulsory break, the client extended additional support and managed to get a special permit to start the work on the site while observing strict precautionary measures.

A central crisis committee led by Bauer project manager Hassan Farhat ensured the implementation of the rectification measures in such a way that not only all obstacles could be overcome but also making it possible to make up for the delays.

In the end, Bauer was able to complete the project ahead of the planned schedule in October 2020 - a tremendous success by which the client was also impressed, and Bauer International FZE has already been engaged to perform further remediation sections.

Digitalisation on the site