The overall winner of the Årets Bygge 2021 award, the prestigious and most important prize in the Swedish public construction sector, is Stockholm’s Norvik Port, which also took the Infrastructure category win. 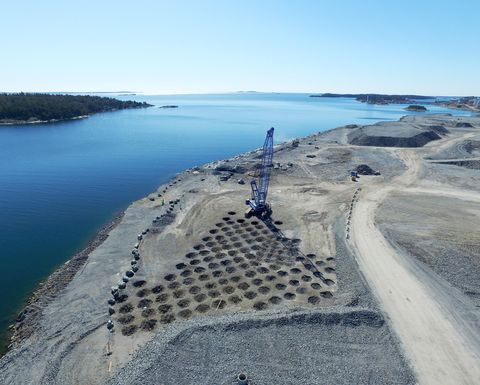 The foundation work undertaken by Trevi on Sweden’s award winning Norvik Port included heavy dynamic compaction over an area with an extension of about 96,000m2

The port of Stockholm located in the historic centre of the city has always contributed to causing traffic congestion in urban areas. That is why Swedish authorities decided to build a new commercial dock in an extra-urban area, mostly dedicated to the storage of containers - Norvik Port.

In 2016, Stockholms Hamnar (Ports of Stockholm) awarded to Trevi a contract for the preparatory works for this construction.

The extra-urban area partially encompassed a zone made-up of filling material, whose sediments were characterised by a variable granulometry ranging from clay to boulders, even a few metres large. To support the heavy loads of the port, it has been necessary to consolidate the soil underneath the port yards through the installation of lime cement columns and jet grouting, while heavy dynamic compaction has been used for the crushed rock backfill's improvement.

The preparatory works implemented by Trevi between 2016 and 2017 for the Norvik Port included:

After the successful completion of the consolidation works for the Norvik Port, NCC awarded Trevi an additional contract for soil improvement.

The second phase required the use of heavy dynamic compaction over an area with an extension of about 96,000m2 characterised by a regular grid of about 15,000 surface 'footprints'.

This technology, rarely applied in Sweden, satisfied the project's requirements and the tight work schedule, proving to be efficient and functional. It proved to be a goal-oriented method and confirms Trevi Group as a leader in the selection, proposal and application of modern and innovative technologies in any geotechnical sector. 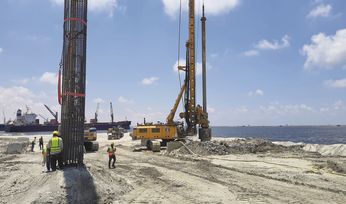