The site of the former blast furnace plant PHOENIX-West in the district of Hoerde, Dortmund, is now home to the 115ha technology and service location PHOENIX West. Construction of a new four-story office and administration building for the transmission system operator Amprion GmbH is currently underway on Robert Schuman Strasse. 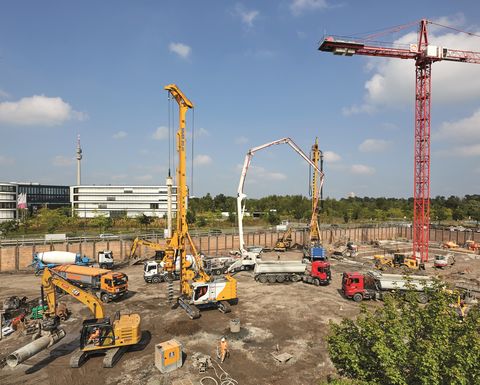 Bauer Spezialtiefbau GmbH was commissioned by Ten Brinke Bau GmbH & Co. KG with the installation of foundation piles for the office and administration building - a total of 301 piles with a diameter of 880mm and a length of up to 24m.

"This is not a standard task," said site manager Mike Schwermer, "because there is evidence of mining activities close to the surface. There is also a tunnel system in the construction soil but the exact location is not known. For these reasons we need to expect cavities in the area of the pile foundations."

The construction site is also located in a bomb disposal area, meaning that extensive preliminary mining surveys had to be carried out during execution using flush drilling and munition investigation (probe and exploratory drilling). For this reason, Bauer Spezialtiefbau carried out exploration drilling with a total length of 6,500m in advance. In total, the munition exploratory drilling had a length of 10,000m.

The construction soil consists of backfill material consisting of brick rubble, slag and ash in varying compositions down to a depth of approximately 11m as well as building remains and old foundations. Below this layer is quaternary stream sedimentation in the form of silt, sand and gravel, followed by a degraded and weathered zone of Carboniferous bedrock. The embedment layer for piles is the Carboniferous bedrock that consists of clay and secondary sandstones. These sandstones have very high strengths of more than 250MN/m². In addition to this, there are also coal layers (seams) up to 2m thick embedded in the pile layer, which cannot be used as a bearing layer. For this reason, the work also includes an inspection and adjustment of pile statics during execution.

Due to the scheduled construction period, a BG 30 and BG 26 drill rig are being used simultaneously. Drilling work for the munition and mining explorations is being carried out at the same time.

Piling works executed by Bauer were completed in September and the remaining works will be finished this month.

Once completed in 2023, the new development will feature around 680 new workplaces in an office space of around 16,000m². The associated underground garage will have around 230 parking spaces in a space of around 7,200m². 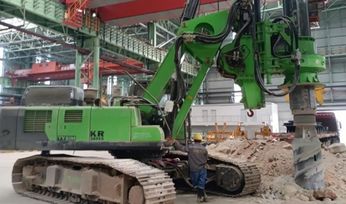 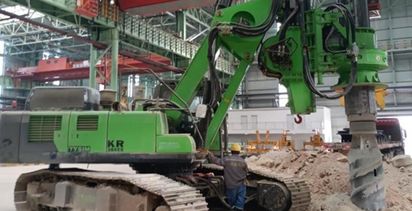