30 years of drilling in Africa

From the day in 1989 when Dave Rossiter bought out his two partners in Ground Mechanics and changed the company’s name to Geomechanics, he has manoeuvred the company for growth. GDI gets an insight into how the business is continually developing. 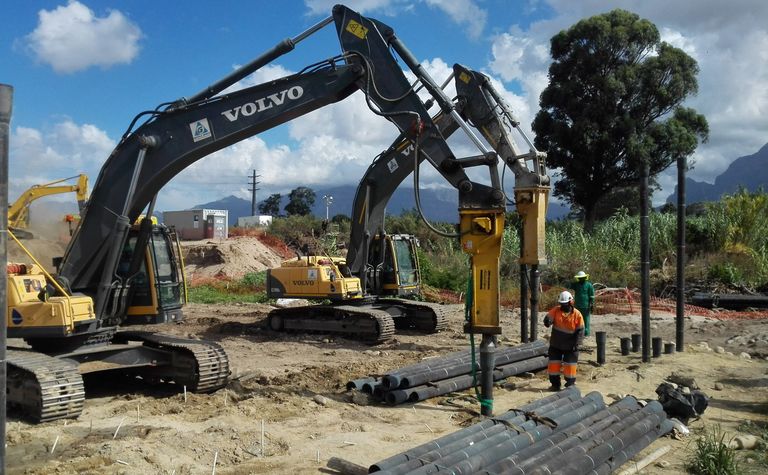 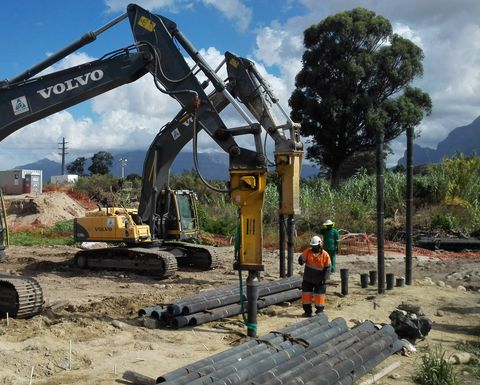 In 2011 Geopile Africa was established to deliver driven ductile iron piling services. A challenging geotechnical profile with river boulders required percussive pre-drilling and grouting to create a safe passage for the ductile iron pile to be driven

Geomechanics' first job entailed geotechnical investigations for the N2 at the Amatikulu Bridge in South Africa. That one project for SANRAL became two, then three and so on until Dave Rossiter, the founder of Geomechanics, and his only permanent employee at the time, Barry Kruger had done the geotechnical investigations for the whole length of the N2 from Amatikulu to Richards Bay.

As the job progressed it required doubling of the workforce and the number of drilling rigs. In the next 30 years of steady growth, Rossiter has never lost sight of the fact that his company originally grew because he was able to deliver good quality services, on time.

The resultant trust from his clients is the basis for the company's success and longevity over 30 years. Now, Rossiter explains: "With a fresh view on economic and political factors influencing our long-term strategies, we have had to shift our focus from only local investment and footprint to now include taking our brand over the borders into neighbouring countries and abroad, on a more permanent basis."

That change in outlook has seen the company of which Rossiter is not only the founder but also the non-executive chairman, open branches in Johannesburg, Durban, East London, Cape Town and Uganda with plans to open further branches as far afield as the United Arab Emirates.

In order to offer such a wide range of drilling options, Geomechanics has continually invested in new equipment. One such example is the company's GEO 601 which is a uniquely designed, sonic and rotary core combination drill rig. This specialist drill rig is equipped with both a Tone Sonic drill head (Sp8000) with proven reliability and a standard hydraulic high-speed rotary core drill head (R1000HS) that gives the user the best of both worlds. The rig is also fitted with a hydraulic trip hammer for conducting SPTs. The two drill heads allow the operator to achieve excellent core recovery in soft overburden materials while maintaining the advantage of being able to conduct conventional or wireline rotary core drilling efficiently and competitively priced, with the same drill rig.

When geotechnical projects became harder to find at the start of the century Geomechanics expanded its portfolio of services to include exploration drilling and also expanded beyond the borders of South Africa with projects in Namibia, Tanzania, Angola, Madagascar, and more recently Sweden.

In 2013, the company added soil and rock movement monitoring and measurement services with the acquisition of Terra Monitoring, the company Rossiter originally worked for before starting Geomechanics in 1989. Again, the expansion was customer-driven - consultants increasingly asking geotechnical service providers to not only provide sampling but also to provide analysis, too.

Geomechanics' head office, main workshops and stores are located at a facility of over 5,000m2 near Lanseria International Airport in Gauteng. At that site, 2,500m2 is dedicated to the manufacture and maintenance of machinery. Only by continually updating and replacing outdated equipment has the company managed to deliver on its promises to its customers.

Over the years Geomechanics has developed a vast array of experience working in the African environment. Often as geotechnical or exploration contractors, the company is the first contractor to arrive at a new site where there is nothing but bush for kilometres in all directions. The company prides itself on its logistical skills when operating in remote locations. Whether it be a helicopter site where rigs must be airlifted into position or on water with a jack-up barge, it has the necessary equipment and experience.

Its camps use state of the art equipment such as thermally insulated cabins and large gensets and must meet acceptable health and safety standards with running water and facilities for medical emergencies. Its staff are experienced in many aspects of operating in remote locations such as building access roads and small bridges in order to access borehole positions, doing helicopter slinging operations to move drill rigs in mountainous areas and building drilling platforms on precarious slopes and cliff sides. The natural environment in which Geomechanics staff often find themselves can present many challenges. The company personnel have had to deal with flooding rivers, wild animals, poisonous snakes in remote areas and sometimes game reserves. Health and safety is paramount and the company has developed a mature health and safety component which ensures the safety of personnel and equipment at all times.

The remote locations have also necessitated the use of some serious equipment over the years. Geomechanics now owns a big fleet of 27 trucks, 13 people carriers and 27 pick-up trucks that it uses to move people and drilling equipment around the continent. The Geomechanics' crews are well used to working with helicopters, too, having continued to gain experience since its first helicopter project in 1996. In addition, Geomechanics is equipped with three barges of various sizes and with jack up capability for marine projects.

When asked what he thinks his biggest achievement is over the 30-year history of Geomechanics, Rossiter says: "It has to be the good reputation we have with our customers. We have worked very hard to establish and maintain this reputation. It was the foundation for our growth from a one-man and one machine start-up to the multi-million Rand organisation we have today."

Geomechanics designed and built its first self-propelled, jack-up barge specifically for drilling in flowing water in 2011 for the Kazangulu bridge feasibility study commissioned by the SADC and the African Development Bank. The company has now become expert at drilling in overwater environments.

The entire project involved investigations for a central processing facility (CPF) in Bullisa, Western Uganda and a pipeline to transport crude oil from the CPF to the 1,443km pipeline to Tanga on the coast of Tanzania. 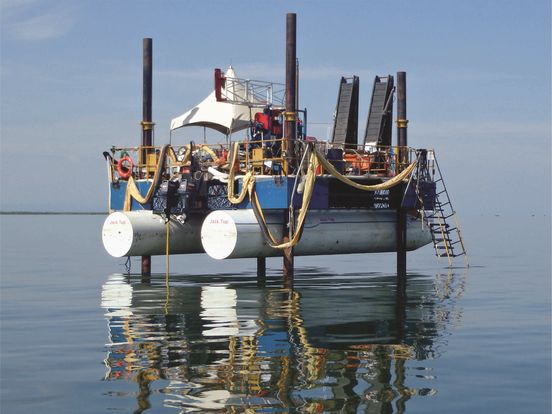 Part of the project entailed drilling and testing in riverbeds, lake floors and on land. Six rotary core holes and five CPTu tests were conducted on the Nile River and another 12 holes and 10 CPTu tests on Lake Albert. These over-water holes were conducted from the Geomechanics barge.

The barge required some adaptions to suit the site conditions prior to mobilisation. The pontoons were lengthened by 1.8m to increase buoyancy and decrease the vessel's draft. The diameter of the 11.8m long legs was also increased from 168mm to 350mm to meet drilling depths down to 17m.

As testimony to its commitment to project excellence during the CPF portion of the operation, GeoGroup subsidiary, Geomechanics recorded zero safety incidents during 120, 000 man-hours.