As part of the site investigation work for the Moelv–Roterud highway project, a Royal Eijkelkamp SonicSampDrill mounted on a barge was used for CPT testing on the Mjøsa lake When geotechnical investigation work was need at the bottom of Norway’s largest lake, a sonic drill mounted on a barge was used for CPTu testing

The Moelv-Roterud project, which includes a new 9km bridge across the Mjøsa lake is one of three EPC contracts on the Moelv-Øyer stretch, which is a 44km four-lane highway project run by Nye Veier AS.

The new bridge is necessary as the existing one is no longer suitable for the volume of traffic using it. Site investigation work is being undertaken as part of the proposal to replace it with a bridge carrying a four-lane highway. The proposal also includes two interchanges and eight smaller structures over a distance of 1.6km.

The scope of the investigation included a recently completed geotechnical survey to determine how deep the foundations of the new bridge over the Mjøsa lake, Norway's biggest lake, should be. The scope of the project was a survey along two lines across the lake by undisturbed sampling, sonic sampling and - parallel to the sampling - a complete CPTu test from a barge. This project, which was unique because of the depth of the lake (80-90m), the depth to solid rock (deeper than 80m) and the conditions of the soil, was carried out with SonicSampDrill equipment from Royal Eijkelkamp.

Moritz Aydt, project manager at BTR Bohrtechnik Roßwag, explains why BTR used the SonicSampDrill equipment for this project. "To be able to engineer the bridge foundation, our client needed some soil data. We accomplished that with sonic sampling and CPTu. We did the CPTu testing to extreme depths. First, we went down through 80m of water and continued CPTu from the lakebed till we reached an overall depth of 140m.

"The cone penetration or cone penetrometer test (CPT) is a method used to determine the geotechnical engineering properties. The parameters measured are tip resistance, sleeve friction, pore pressure, inclination and penetration speed. This data shows our client the condition of the soil and how deep the foundations of the bridge should be." Aydt then goes on to explain why sonic was the preferred drilling technique: "Our company chose sonic drilling because it's perfect for soft rock formations, silts and gravels. We come from an area where we mostly do rock drilling. But occasionally we must go through overburden or do sampling in landfills and softer formations. This is where sonic is perfect because it gets you nice core samples at an unbeatable production speed. This makes sonic very efficient and fast.

"I would definitely recommend sonic because of all its advantages. Its production speed allows us to be much more competitive. With the dual head sonic rig - that is, sonic plus high-speed rotary - we can apply our sonic rig for multiple purposes." 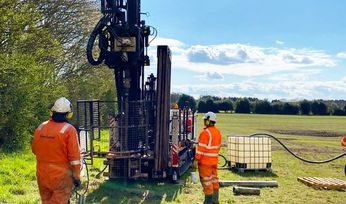 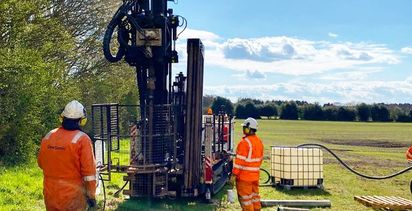