Ongoing work on Vienna’s underground rail network expansion project saw In Situ contracted to carry out self-boring pressuremeter testing in the Austrian city as part of the tunnel design process. 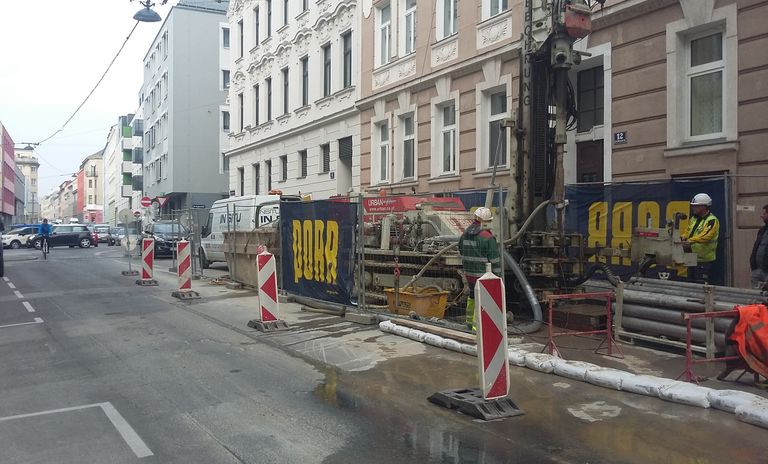 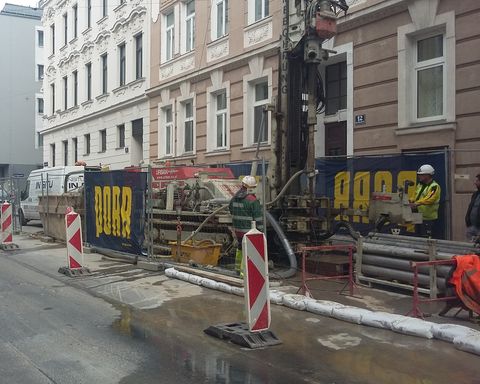 In 2019 In Situ Site Investigation Ltd was asked by Porr Umwelttechnik GmbH, on behalf of Wiener Linien GmbH & Co KG, to carry out self-boring pressuremeter (SBP) testing as part of a site investigation in Vienna, Austria. The investigation was carried out as part of the ongoing inner-city underground rail network expansion project across the city. Pressuremeter testing was required to collect in situ geotechnical strength and stiffness parameters for use in the design of the tunnel sections.

In Situ carried out an initial phase of pressuremeter testing for the new U2xU5 underground line extension in Autumn 2016, and the success of that project and quality of acquired data resulted in In Situ being asked to return.

The proposed network expansion is mainly designed to close a gap in the inner-city underground network and ensure there is enough capacity available at peak times. The site investigation focused on the U5 underground line located in the north-west of Vienna city centre. It will be Vienna's first fully automated underground line and will increase efficiency while allowing greater safety and flexibility.

Due to the location of the investigation within the city limits of Vienna, the boreholes were positioned in public highways, which posed issues with tight access and small work areas. This meant a well organised and tidy site operation was key. The pressuremeter testing was carried out from In Situ's dedicated vehicle, with the rear load area specifically designed for carrying the equipment and conducting the testing. This enabled all the equipment to be self-contained, kept the drilling work area clear and uncluttered and allowed relatively quick moves to the next testing location.

The testing programme was conducted over a continuous five weeks on-site with twenty-two tests carried out in four boreholes. Tests were run at depths ranging from 6.30 to 35.20m below ground level. The instrument used for testing was In Situ's self-boring pressuremeter that utilises six arms spaced evenly around the centre point to measure radial displacement and a pair of pore water pressure sensors. These arms are housed beneath the inflatable rubber membrane expanding section. The instrument has a nominal diameter of 89.1mm with a pressure capacity of up to 10MPa. The SBP utilised a "fishtail" drag bit which ensured minimal disturbance to the ground during instrument insertion. 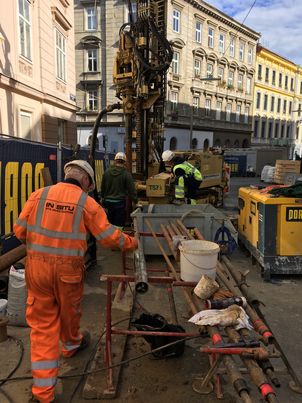 The SBP was drilled into the ground by Porr Umwelttechnik, under the supervision and guidance of In Situ senior pressuremeter testing operator Dave Lewins. A Beretta T57 top drive rotary rig was used along with water flush and a polymer-based drilling additive. The rotary rig provided rotation to the SBP through inner rods and thrust to advance the pressuremeter via the non-rotating outer rods. The flush by the rig was pumped down the inner rods, and up through the inner/outer rod annulus to remove the cuttings and provide lubrication and cooling to the cutter. The outside of the pressuremeter remains in contact with the ground during insertion with less disturbance to the material being tested than for other pressuremeters which are inserted into pre-bored test sections.

The site posed a challenge for use of the SBP due to the variable ground conditions present. This required in-depth planning, with a pre-start site visit, carried out by In Situ to view the recovered material from boreholes carried out adjacent to the pressuremeter test locations. The range of ground conditions included slightly gravelly sandy silt, through to clayey silt, often highly fossiliferous to slightly gravelly silty sand.

When drilling the SBP into strata where gravel was present, extra care was taken to ensure optimal instrument insertion, with the rig rotation, pull down pressure and flush pressure carefully altered to ensure the cutting face was able to remove the material from the borehole. The flush returns were constantly checked to for the amount and type of material coming out from the test pocket. Due to this technique, in combination with the experience from the previous testing visit, little disturbance was noted in the test results and no burst membranes occurred.

Once inserted into the ground, the pressuremeter tests consisted of applying increasing pressure to the inside of the membrane, forcing it to press against the wall of the test pocket The electrical transducers within the probe measure the pressure applied and associated expansion of the membrane, along with any pore water pressures generated.

Overall, the pressuremeter testing on the project was a great success, with few delays being caused by equipment breakdowns and limited disruption to the flow of traffic on the highways. Testing was high quality with only a small number of tests exhibiting disturbance. Where disturbance was noted, this was likely due to the presence of granular material in the test zone. This allowed In Situ to provide the client with a high level of confidence in the data for application to the design of the project. 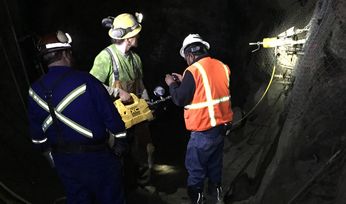