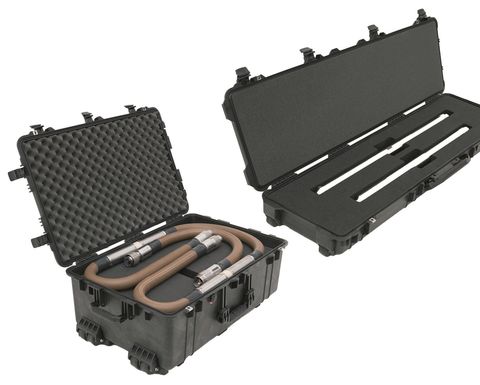 Cased and ready to go: the PS Logger is proven with data acquired from thousands of boreholes worldwide, often in the harshest of offshore applications

The PS Logger probe measures P (compression) and S (shear) wave velocities in a single borehole without the need for external energy sources, making it simple and quick to deploy and, therefore, cost-effective, especially when compared to alternative methods. When combined with bulk density values (from a density log or from core sample tests) small strain moduli (Young's, shear and bulk) can be calculated using simple formulae.

The PS Logger was originally developed by the Robertson Geologging Ltd parent company OYO Corporation in the 1970s to provide a full waveform tool that would produce reliable P and S wave velocity measurements in unconsolidated materials and rock formations at depth.

The initial application was microzonation, to characterise earthquake-prone zones with respect to geological and geophysical characteristics such as ground shaking, liquefaction susceptibility, landslide, rockfall hazard and earthquake-related flooding, so that seismic hazards within the area could be identified.

So successful was the probe that it soon gained acceptance in the civil engineering arena, firstly in Japan and Asia, then the US in the 1980s and subsequently Europe.

The development and manufacture of the probe was continued by Robertson Geo in 2007 where it has remained a market leader, especially in the burgeoning offshore wind farm market.

The PS Logger system is offered worldwide as a turnkey service, for long-term and short-term rental, or for outright purchase. It is also plug compatible with the full range of Robertson Geo slim hole probes, that are calibrated and issued with a conformance certificate prior to mobilisation.

How the PS Logger works

The PS Logger is a full waveform acoustic probe, designed to measure compressional and shear wave velocities in soils and rock formations. It operates using indirect excitation rather than mode conversion as in a conventional sonic. It is capable of acquiring high-resolution P and S wave data in borehole depths of up to 600m.

It contains a unique design of powerful hammer source and two receivers, separated by acoustic damping tubes. To acquire data, the probe is stopped at the required depth and the source is fired under surface command. Firing causes a solenoid-operated shuttle aligned across the borehole axis to strike plates on opposite sides of the probe in turn, setting up a pressure doublet in the surrounding fluid. The resultant fluid motion produces a tube wave at the borehole wall with velocity close to the shear velocity of the formation together with a compressional wave. As the waves propagate parallel to the borehole axis, they set up corresponding fluid movements that are detected by the two-receiver combination (neutral-buoyancy 3D hydrophone for P waves and horizontally aligned geophone for S waves), allowing the wave velocities to be directly measured.

The facility to stack multiple shots and filter the data as in normal seismic data acquisition is included in the operating software.

With an integral powerful source, energy delivery is constant throughout the extent of the borehole, independent of borehole depth, giving reliable velocity measurement in hard rock and the slowest of formations.

The high vertical resolution (0.5m typical) allows for measurement of thin layers and is not affected by high-velocity layers above low-velocity layers. As no external source is required this makes the system ideal for working offshore on barges, jack-up platforms and drillships.

As the probe is suspended in the borehole no clamping to the borehole wall is required allowing faster acquisition. The PS logging can be conducted at the end of the drilling alongside any of the full range of conventional logging probes.

The propagated waves are measured in the vertical plane providing the most useful information in anisotropic formations. When combined with bulk density values the PS Logger provides a continuous strength profile, especially important when hard layers are encountered and CPT methods ‘refuse'.

The relatively high frequency of the source, when compared to other methods, means that good data can usually be obtained in very noisy environments. On drillships where engines, DP thrusters, generators and ancillary equipment contribute to the ambient noise this is very important. The reversed polarity shear wave measurements provide unambiguous identification of shear wave arrivals.

Robertson Geo has been regularly deploying the PS Logger throughout the world since 2008, especially for offshore projects where alternative methods are impractical. The list of projects includes wind farms, bridges, port extensions, oil and gas sub-surface infrastructure and nuclear power plants.

The UK is a world leader in the development of offshore wind farms. Rock strength information is key to engineers designing foundations for the massive structures which support the latest generation of turbines. Operating from jack-up platforms or from drillships, marine resistant technology developed by Robertson Geo has allowed the PS Logger to be routinely deployed.

The list of wind farms is extensive but includes Seagreen, Dudgeon, Hornsea, Moray East and Neart Na Gaoithe in the UK as well as ones in Germany, France, Belgium, Denmark and the US. 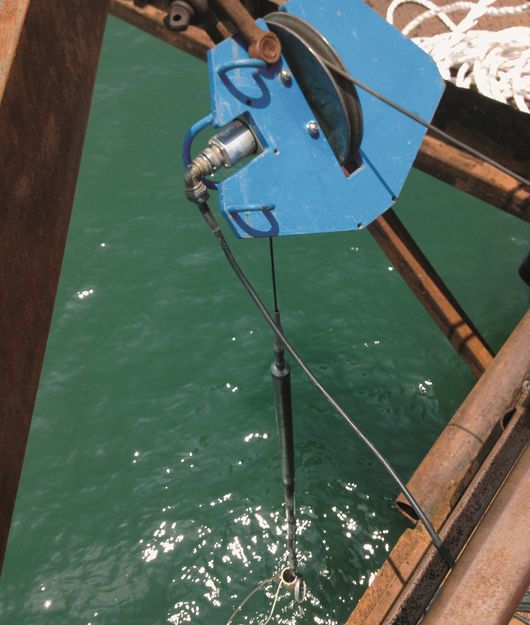 PS Loggers have also seen action on many of the UK's largest infrastructure projects including Wylfa, Sizewell B, Oldbury and Bradwell nuclear power stations, HS2, Lower Thames Crossing and A303 Stonehenge bypass, in addition to many other major civil engineering projects. However, the ease of deployment and cost-effectiveness of the technology means affordability for even the smallest of projects.

Borehole conditions play a big part in data quality and that is where the drilling personnel should be involved. Rotary drilled boreholes always provide the best data (low rugosity). The PS Logger can produce good data in boreholes from 65mm to 400mm with the optimum range being from 75mm to 200mm. Inclined boreholes can also be logged providing the tilt is no more than 30 degrees from vertical.

Where borehole stability is an issue the logging is often split into separate runs whereby the drill string is retrieved in stages. To minimise possible loss of data, close liaison with the drillers, geologists and geotechnical personnel is required to confirm where the potentially unstable layers are (eg gravel beds). A shooting plan can then be made whereby the drill string can be withdrawn in stages to provide some open borehole while providing protection for the problematic zones.

Due to the PS Logger's tolerance to borehole muds, there is little or no preparation required on the borehole. Polymer or Bentonite based muds can be extremely viscous with the limiting factor being the buoyancy of the probe. Where the use of thick mud fails to provide sufficient borehole stability the borehole can be plastic lined and grouted. A specification for the grouting can be supplied.

Full waveforms are recorded digitally at acquisition time across six channels (P wave, S wave left and S wave right at the near and far receivers) at a predetermined sample rate as low as 2.5µsec. The sample rate is carefully selected to be as small as possible to provide the best resolution but high enough to capture the arrivals within the listening window. Low pass filters can be applied at acquisition time and digital filters can be applied during or post-acquisition.

Using the acquisition software, the waveforms can be displayed, scaled and filtered to allow for the picking of the first arrivals at each receiver. Automated picking is available but in most cases, the arrivals are picked manually by experienced engineers.

While the P wave arrivals are generally simple to pick, the S waves with their typically slow onset and possible superposition over the decaying P waves benefit from an experienced eye to avoid ‘cycle skipping'. From the receiver separation (1m) and the arrival times, the velocities are automatically calculated.

Once the arrival times and velocities have been determined, the data is opened in a second programme (also supplied with all PS logger systems) that creates and manipulates logs of the data. If a bulk density profile by depth is available it can be combined with velocities to give the small strain moduli, Young's, shear and bulk and Poisson's ratio. Finally, all data can be outputted in industry-standard LAS format.

From unconsolidated soils to the hardest of rocks, the PS logger gives proven results.

The simplicity of deployment combined with a minimum of borehole preparation and the ability to obtain high-quality velocity data in unconsolidated formations and hard rocks make the PS Logger a sound economic choice for geotechnical and civil engineers investigating rock strength. 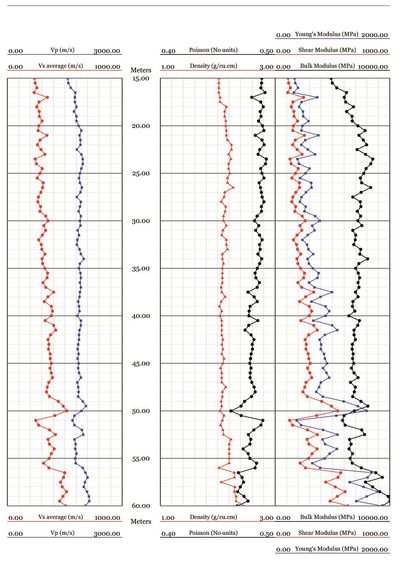 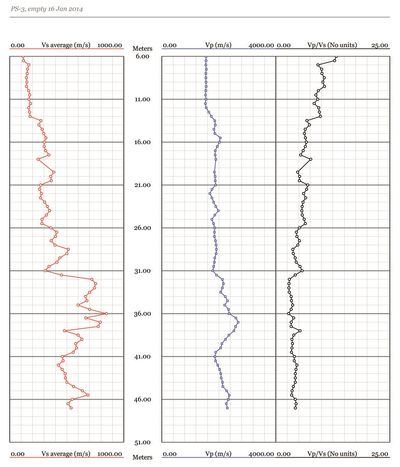 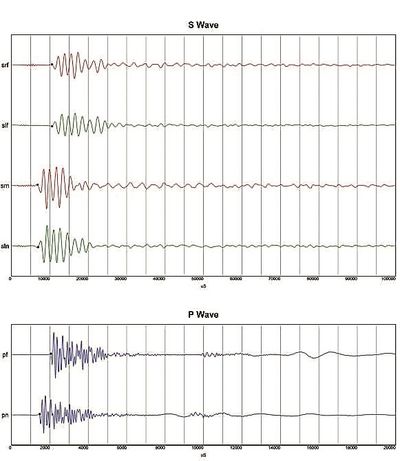 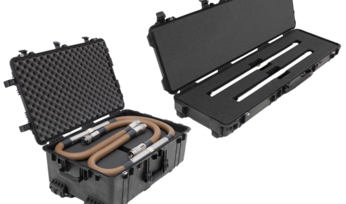 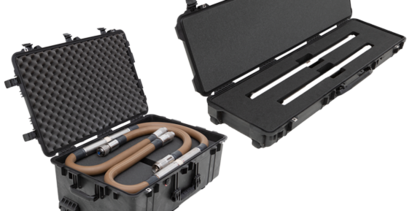