Heads of the Valleys Road - CAN Geotechnical nailed it

When extensive road widening in Wales created unstable slopes CAN Geotechnical was called upon to use its extensive experience to employ a range of techniques to stabilise the earthworks. 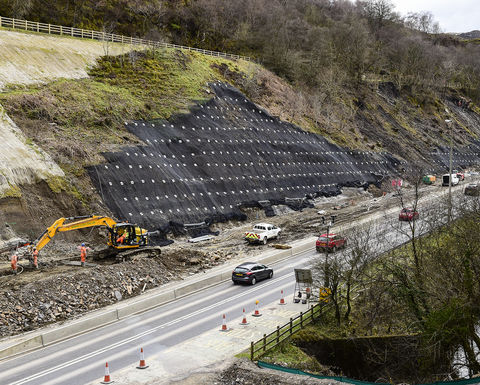 The A465 Heads of the Valleys Road runs across the northern edge of industrial South Wales, providing an east-west connection between west and east Wales. Welsh Government announced an ambitious plan to improve this main arterial trunk road, which in turn is critical in the social and economic regeneration of the area, by fully upgrading to the road to a full dual-carriageway along its entire length.

For ease of delivery, the Welsh government has split the project into a number of sections; section 1 (Abergavenny to Gilwern), section 2 (Gilwern and Brynmawr), section 3 (Brynmawr to Tredegar), section 4 (Tredegar to Dowlais), Section 5 (Dowlais to A470) and Section 6 (the A470 junction to Hirwaun).

Section 2 of the existing A465 was built in the 1960s as a single three-lane carriageway. The road features two lanes in the uphill direction and one in the downhill direction.

While the section runs through some stunning hilly landscape, on the edge of the Brecon Beacons National Park, this itself posed many challenges, not least of all it demanded extensive earthworks and the removal of well over 1.2 million tonnes of material to facilitate the creation of the many cuttings and embankments along the route.

In addition, many sections of the road required widening and it has therefore been necessary to cut into the adjacent hillside, resulting in the significant steepening of the road boundary, which brought about intrinsic destabilisation. Work began in late 2014, with CAN Geotechnical being awarded the contract to stabilise the newly steepened slopes.

Specifically, the project demanded the installation of some 11,000 soil nails, requiring an estimated 45 miles of holes.

However, there was extensive made ground, clay and boulders, with different types of rock - ranging from mudstone and soft sandstone to very solid limestone - along the 8km route. As a result of the ground conditions, different construction methods were required in addition to the soil nails. The mix of techniques used included: rock bolts, sprayed concrete, wire-basket gabions, erosion matting and rockfall netting deployed across the route.

It was on this project that CAN's robotic sprayed concrete attachment was used for the first time. It was deployed where the road was to be widened into the Clydach Gorge. CAN Geotechnical also stabilised the cut slope, providing temporary and permanent stability.

Logistically, CAN Geotechnical mobilised up to nine different rigs along the route, equipped with a variety of different types of drills allowing concurrent working of different techniques and schedules to be maintained.

During the project, most of the drilling was performed using a hydraulic drilling attachment mounted on an excavator boom, with the excavator working downwards from the top of the slope, as the roadside was progressively cut back by Walters, the earthworks contractor. A bespoke A-frame cradle was suspended on tirfor winches to carry the drilling attachment in areas where existing cliff-faces required stabilising. 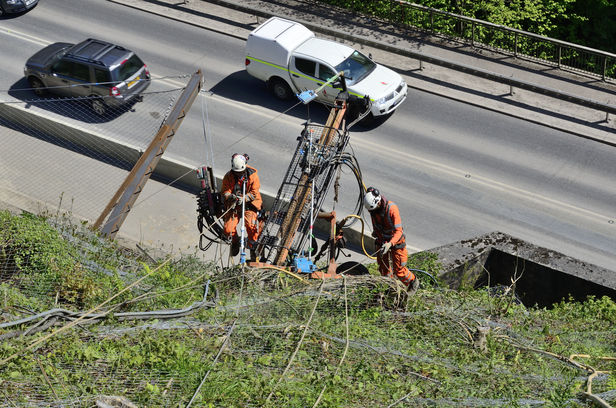 Varying complex techniques were used, including; self-drilling nails (with diameters ranging from 76mm to 150mm) and solid bar anchors grouted into holes drilled into the solid rock (using down-the-hole hammer methods). Loose material and voids were discovered, which required a significant amount of grout to successfully cement the anchors in place. Where these ‘problem' holes were encountered, the anchors, together with the neighbouring four of five anchors, were tested with a hydraulic jack.

On rocky embankments, where there was a greater risk of loose rock falling onto the road below, steel mesh rock netting was installed, rolled down from the top of the slope with the anchors drilled into the rockface at approximately 1m - 2m centres. Around 36,000m2 of netting was used in total on the project.

To improve slope instability and prevent rock falls during other construction activities, CAN Geotechnical provided temporary works to stabilise the ground. These temporary works included the installation of a 1,000kJ, 230m-long cantilever catch fence. Further catch fences and temporary rockfall netting were installed to assist with overall site safety, too.

Keller Group subsidiary, Phi Group, carried out further stabilisation work at a number of locations, where the ground sloped away steeply below the carriageway and required more extensive widening. Phi used its Textomur reinforcing system to construct retaining walls and support the loadings of the carriageway above. While Phi's work was complementary to that of CAN Geotechnical, there was little working overlap on-site with Phi's work being a follow-on process.

The project is an extremely complex one, with many work threads being undertaken concurrently. To ensure all aspects of the stabilisation project run smoothly, CAN Geotechnical placed an on-site project manager, whose role was to coordinate not only the work of CAN Geotechnical but also how its workforce and activities interacted with other contractors. CAN Geotechnical is expected to be on-site until project completion. 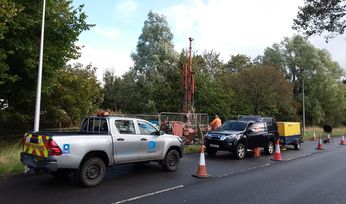 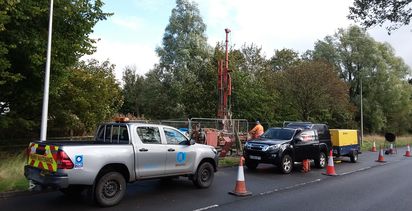