When J. Murphy and Sons was awarded the earthwork and drainage work contract for the Arley railway tunnel it turned to CAN Geotechnical for the geotechnical component. 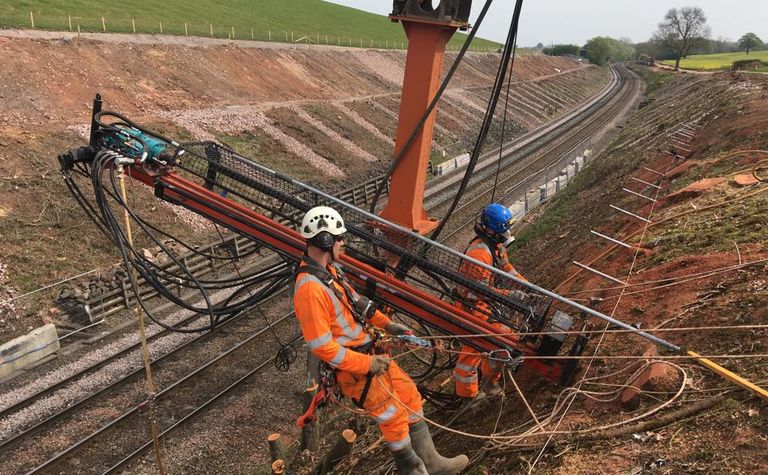 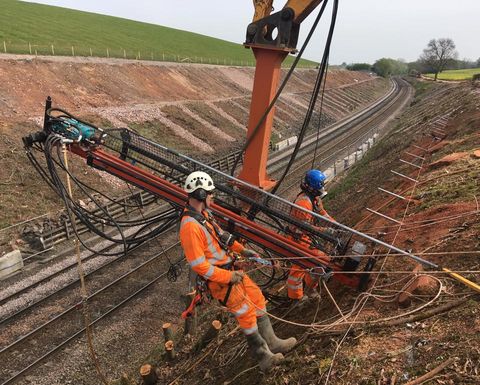 The Arley Tunnel site in the UK dates to 1864 when it was opened by Midland Railway on the Whitacre to Nuneaton line, as part of the Birmingham to Leicester route.

The tunnel was constructed on the highest point along the route between Arley and Stockingford and it has been subject to subsidence. The tunnel was closed completely to passenger traffic in December 1948 to address settlement works, when part of the tunnel was opened out into cutting and drainage and pressure grouting were undertaken.

Today, the site continues to be a busy route in the Network Rail North West and Central region, carrying both passenger and freight trains and because of its historic stability issues are monitored closely by the route's operator, Network Rail.

Geologically, the site is comprised of soil overlying natural rock, part of the Whitacre Member of the Upper Carboniferous Salop Formation, with the land immediately surrounding the area heavily impacted by the local coal mining industry, prior to the railway being constructed.

Having presented problems in the past, the mixture of natural and man-made landscape still poses a risk of instability to the cutting, potentially leading to rockfall or landslides affecting the operational railway and as such Network Rail put out a tender to address the issue. The scheme was as part of Britain's Railway Upgrade Plan, and J. Murphy and Sons was awarded the contract to design and build the required earthworks and drainage scheme.

Ground investigation works at the site were undertaken by Central Alliance in 2015 and consisted of four boreholes being drilled on the crest of the cutting and five trial pits on the cutting slope. Data obtained was used by JBA Consulting to design new drainage systems and a geotechnical stabilisation solution, with a specified 120-year design life, to address the instability of the cutting across its full 530m length.

Influencing the design, the cutting itself tapers from flat surround ground furthest from the tunnel portal, down to over 20m deep at the entrance to the tunnel, with the whole cutting heavily vegetated including mature trees. The slope angle steadily increases with the depth of the cutting, from low angled soil slope to a 60-degree steep mixed soil and rock slope at the tunnel portal. For approximately 300m of the shallow end of the cutting, a drainage upgrade was specified, which consisted of clearing existing crest drainage and refurbishing the existing rock blanket slope drainage ribs. A new mid-slope drain was also specified along the North side of the cutting, and the crest drainage on the South side of the cutting was upgraded and extended.

The steeper section of cutting, adjacent to the portal and totalling 230m in length, posed a higher risk of ground instability than could be addressed with drainage measures alone. The solution was to split this section into two zones, based on the geology; Zone 1 being the very steepest and deepest part of the cutting, with the lower half of the cutting here consisting of weathered soil slope and the upper half consisting of soil overlaying partially exposed bands of competent siltstone and mudstone. Zone 2 consisted of soil slope only, with no competent rock present. In the soil slope areas, 6m length R32 self-drilling hollow bar soil nails were specified and where rock was anticipated to be encountered, 3m length 28mm solid bar rock bolts were specified. In total over 2,200 soil nails and rock bolts were specified, with 8,500m2 of erosion matting and high tensile steel mesh facing specified over the whole Zone 1 and Zone 2 areas.

J Murphy and Sons undertook self-delivery of the drainage element of the scheme but approached CAN Geotechnical to sub-contract the geotechnical component. CAN Geotechnical determined that long-reach 360 excavators fitted with drill masts would be the most efficient way to undertake the drilling on the upper slopes. However, the depth of the cutting would require the use of on-slope drill rigs to drill on the mid- and lower-slope where the long reach plant could not reach. The very bottom row of soil nails at the base of the cutting were also too close to the track itself to safely drill with the line open and CAN Geotechnical determined that they would need to be drilled using RRV-mounted drill masts during possession.

Safety was paramount throughout the project, so in order to allow safe working of the on-slope drill rigs with the line open to traffic, CAN Geotechnical proposed installing a bespoke lightweight temporary catch fence. Rockfall trajectory analysis was carried out and informed a temporary works design, requiring a 1.5m height fence. This would be attached to the RRV drilled lower row of permanent soil nails using angled adapters, creating a 1.5m catch fence running along the base of the cutting to protect the railway line from any material dislodged by the slope drill rigs. However, with the vertical spacing between each row of soil nails in the initial design being less than 1m, there would be insufficient space above the catch fence to fit a slope mounted drill above it to drill row two. This would, therefore, require the bottom two rows of soil nails to be drilled during possession, with a catch fence fitted to row one soil nails allowing row three to be drilled with slope mounted drill rigs.

As a busy rail route, possession opportunities were limited to a short working window on each Saturday night, with a substantial amount of the de-vegetation work and tree felling also needing to be carried out during these periods.

To enhance progress, CAN Geotechnical proposed a number of possible adjustments to the soil nailing design layout in order to minimise the quantity of soil nails that would need to be drilled during possession. 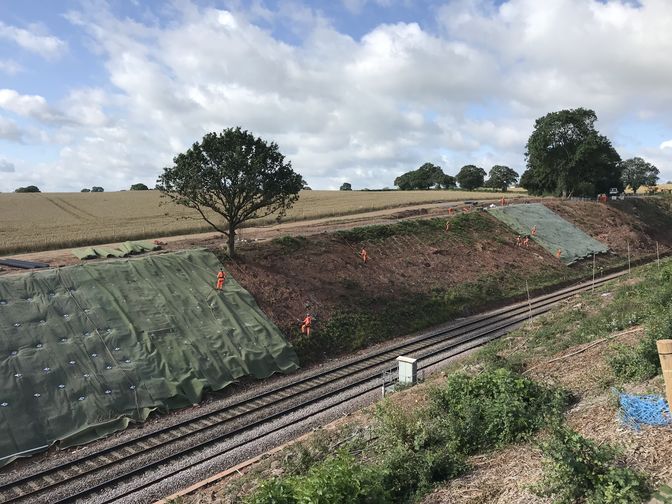 This adjustment to the soil nailing design layout allowed overall soil nail quantities to remain the same, but the bottom row only to be drilled during the limited possessions available. With the temporary catch fence installed secured to row one this then allowed the remaining soil nails and rock bolts including row two to be drilled during normal daytime working with the line open. This halved the requirement for RRV drilling within possession, significantly decreasing costs and programme duration.

John Murphy and Sons mobilised to site in early March 2019 to carry out enabling works and undertake renewal and upgrade of the drainage. CAN Geotechnical's work elements commenced in late March 2019, beginning with vegetation clearance and the installation of the upper rows of soil nails and rock bolts using long reach plant.

The scheme design specified soil nails or rock bolts based on visual inspection of the cutting only, with no detailed information available to confirm the underground conditions. Suitability testing was used to confirm the exact areas where the cutting transitions from soil to rock. In total 20 suitability rock bolts and soil nails were installed early in the site works phase spread over site and pull out testing undertaken. A high proportion of these were sited on the assumed border between soil and competent rock, enabling review of the drill logs and results of pull-out testing by the scheme designer. This allowed the exact determination of where soil nails and rock bolts should be installed, according to known conditions on-site.

A complex programme was devised for the geotechnical works, where the short working window on Saturday nights would be utilised to focus on one of 10 subsections of Zone 1 and 2 at a time. In each section vegetation clearance, tree felling, RRV drilling soil nails and installation of the temporary catch fence would be undertaken, which created a safe, clear working area for midweek works to commence, with subsequent areas opened in turn on each Saturday night possession.

The possession works were completed ahead of programme, with less possessions required overall than programmed. This allowed the main midweek works to progress as planned, and with up to six drill rigs working at a time the geotechnical element of the scheme has progressed well, with the drainage works being undertaken concurrently.

CAN Geotechnical's work on the site was completed at the end of August 2019, with J Murphy and Sons' elements completed the end of September 2019. 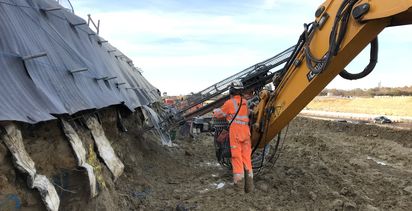 Trevi's involvement with the Lonato Tunnel

Tesalia Tunnel: The new landmark on the Coffee Axis in Colombia