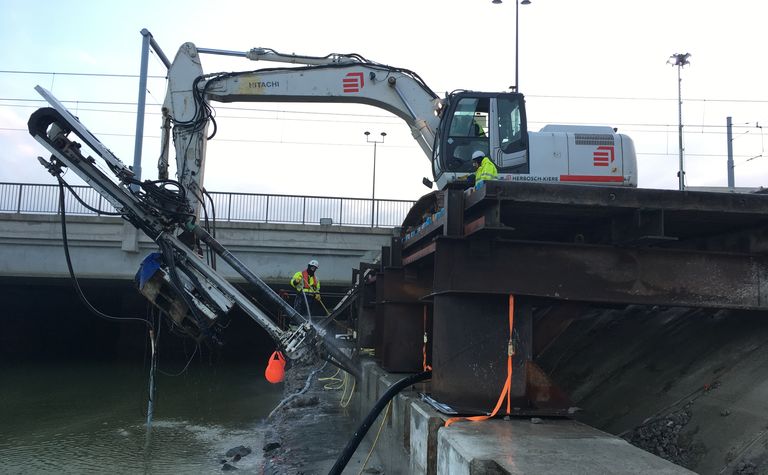 A KLEMM KA 162 equipped with the KD 1215R hydraulic drifter mounted on an excavator being used on the Albert Canal, Belgium

The Albert Canal, which connects the Meuse and the industrial areas of Liège with the Antwerp maritime port, stretches along for nearly 130km, making it one of the main arteries for transporting goods by water in Belgium. In order to increase the capacity of the waterway to accommodate more and also larger ships, extensive expansion work has been taking place along the channel line for quite some time.

As part of this project, Herbosch-Kiere NV of Beveren, a company specialising in hydraulics and foundation engineering and belonging to the Eiffage Group, which in turn employs approximately 70,000 people, recently built a new 260m quay wall along the canal. Herbosch-Kiere was commissioned as the general contractor to carry out the sheet piling, reinforced concrete and anchor work for the construction phase near the port of Antwerp.

A newly delivered KLEMM KR 805-3G anchor drilling machine was used to make a total of 129 strand anchors spaced 2m apart using the overburden drilling method. All of the anchors are designed to stay as permanent anchors with double corrosion protection and with 5-6 strands for payloads between 570 and 700kN per anchor. The drilling diameter chosen for the outer tube is 177.8mm and the length of the holes is 23m to 29m.

The biggest technical challenge when it comes to the preparation of the construction project was to prevent overlapping of the newly drilled anchors with the existing foundation piles of an adjacent bridge. Therefore, a collision-free course of all drill holes and the existing foundation piles in a 3D model was already simulated in the planning phase and adopted as a road map for the execution of the project.

For all anchors that could be drilled from a pontoon or from an upstream embankment, the rig of choice was a KR 805-3G anchor drilling rig, equipped with a powerful hydraulic hammer type KD 2524. The KR 805-3G offers both very flexible kinematics for exact alignment of the drill mast at the drilling point and the necessary rigidity to keep the drill mast stable in the orientation determined by 3D pre-planning during heavy-duty drilling.

Since access on the waterside was not always possible, and some of the anchors had to be executed from the embankment with the drill mast positioned over the water. For this purpose, a KLEMM KA 162 drilling attachment system operated on a hydraulic excavator weighing approx. 30t was selected.

The efficient and safe handling of up to 140kg pipe pairs during drilling was ensured by using a KLEMM HBR 122 handling system in conjunction with a suitable hydraulic excavator. This equipment combines innovative technology with a high level of occupational safety for the operating personnel.

The project, which was commissioned by the Flemish Waterway Administration (De Vlaamse Waterweg), was successfully completed in the summer of 2019. 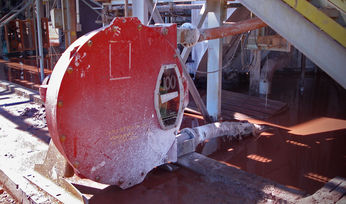 Rising to the challenge with a sonic option