When a major motorway connection in the South of England needed developing to accommodate ever increasing amounts of traffic, Can Geotechnical was called upon to undertake a programme of geotechnical works to stabilise a newly cut face along the road. 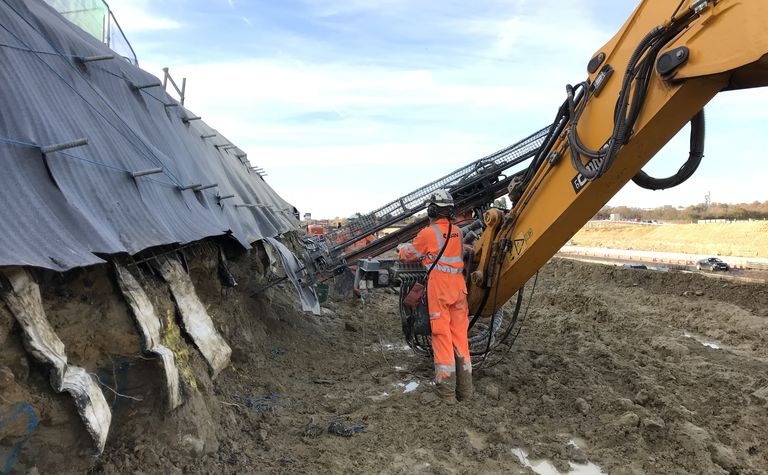 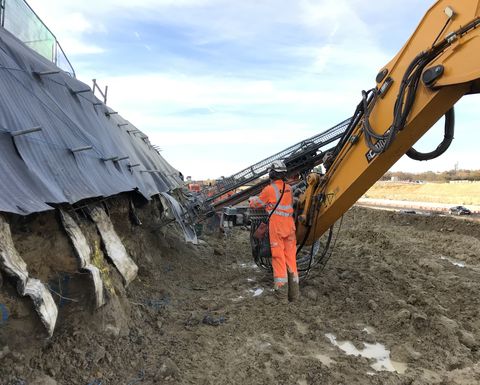 The M20 is one of the most highly trafficked highways in England. Running through Kent, it follows on from the A20 at Swanley, from where it then meets the M25, before continuing to Folkestone, where it provides a link to the Channel Tunnel and the ports at Dover. Though not signposted, the 50.6km road forms part of the European route E15, which terminates in southern Spain.

Around junction 10 of the motorway, long distance traffic from the M20, A20 and A2070 (south of Ashford) conflicts with local traffic from Hythe Road and Kennington Road, and it was predicted that the existing M20 junction 10 would suffer from congestion and long delays in the future if additional capacity was not created.

Highways England identified that a scheme was essential to the future development of South Ashford, and while recent improvements at junction 10, to increase the capacity and improve safety, allow some development to go ahead, long-term they were not considered sufficient for all of the proposed developments.

The solution involved the creation of a new interchange on the M20 east of Junction 10, which incorporated a new two-lane dual carriageway link road to the existing A2070 Southern Orbital Road.

Specifically, the construction of a new M20 junction 10A, 700m south east of junction 10, which included - a new roundabout over the motorway, new slip roads, a new link road to the A2070 Bad Munstereifel Road, with traffic signals on parts of the junction and two three-lane bridges, and the removal of the east-facing slip roads at the existing junction 10 and the A20 Hythe Road incorporated in the new junction, so that the traffic in both directions can travel via the new roundabout.

Additionally, a new pedestrian and cycle bridge over the M20 from Kingsford Street to the A20, which involved the demolition of the previous Highfield Lane Bridge was included in the plans.

Taylor Woodrow VINCI JV, the main contractor for the project, approached CAN Geotechnical to undertake a programme of geotechnical works to stabilise a newly cut face on the M20 Motorway. The face needed to be steepened to 60 degrees in order to allow room for the proposed slip road on the new Junction 10a.

CAN's work consisted of stabilising the face as it was cut top-down, working on bench cuts of 1.5m height at a time, with soil nails and sprayed concrete being installed to the face of each bench prior to excavating the one below. In total CAN installed some 370 soil nails and sprayed over 350t of concrete. The concrete was sprayed using a remote-controlled excavator attachment, removing the need for a handheld nozzle to be used, and allowed seamless spraying and drilling with the same machine.

Following the completion of the soil nails and sprayed concrete the slope was then finished with a bespoke gabion facing system, which was designed and built by CAN. In addition to completing the stabilisation works, the bespoke gabion also improved the aesthetics of the finished solution, which was completed in just 20 weeks.