Ground freezing was a technique recently used by Keller on a project on Long Island, New York, where it was used to provide excavation support and groundwater control on two shafts for a major tunnelling project. 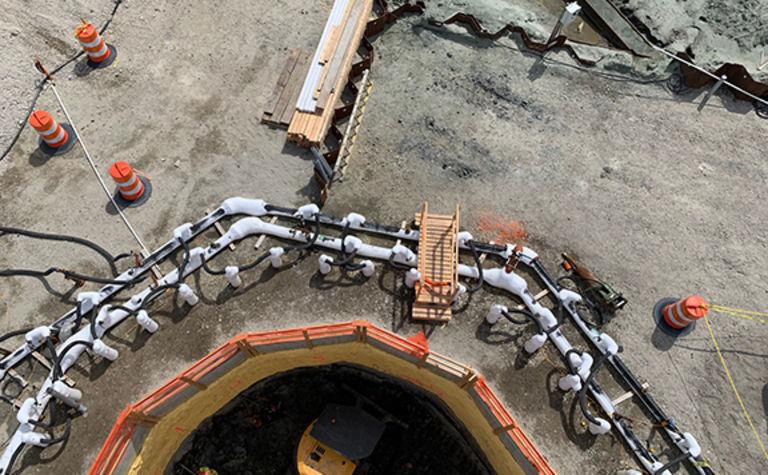 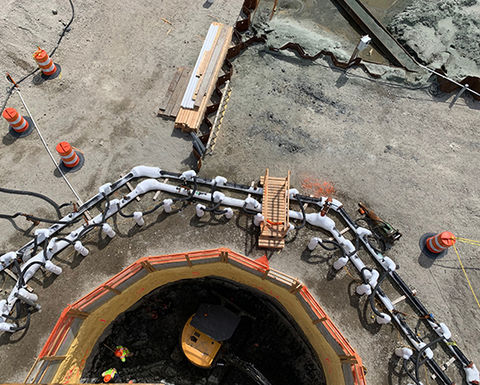 Ground freezing was undertaken by Keller on a project on Long Island, New York, to provide excavation support and groundwater control on shafts for a tunnelling project

It is the largest infrastructure programme ever in Suffolk County where a 2.6-mile stretch of outfall pipe pumping millions of gallons of treated wastewater under the Great South Bay is being replaced.

The US$187 million construction contract was awarded by County officials in May 2018 to a joint venture of OHL, Posillico and SELI Overseas. Keller was handed the subcontract for temporary excavation support and groundwater control on the tunnel's launching and receiving shafts.

The plans for the 125ft-deep, 35ft-internal-diameter launch shaft specified ground freezing, in large part due to the amount of space available at the Bergen Point Wastewater Treatment Plant, where the tunnel starts. "It's a small site, with room for just one rig, so there isn't really space to carry out a diaphragm wall," said Keller's director of Ground Freezing, Joe Sopko.

Joe has almost 40 years' experience with ground freezing and Keller is one of the few companies in North America to offer it. It is also the only one to carry out its own drilling for the refrigeration pipes and to run its own in-depth analysis and modelling to ensure the highest levels of quality control.

Due to the permeable sands at the bottom of the proposed launch shaft, the project required a 20ft-thick frozen bottom plug, which had to be frozen to a greater extent than the shaft walls.

"Initial frozen soil compression tests provided to us reported lower-than-expected frozen soil strengths and didn't take into consideration groundwater salinity," said Sopko. "So, we collected our own soil samples, subcontracted frozen lab tests, and used a time-dependent heat-transfer model to evaluate the time needed to freeze the perimeter and the bottom plug. This was coupled with a model that included groundwater flow to evaluate the effects on the formation of the frozen earth wall.

"The reason is, if you have water flowing at a greater velocity than 3ft per day, the water introduces more heat than the refrigeration system can take out. You also need to understand the salinity, as salty soil takes longer to freeze and has lower strength."

This detailed testing and modelling enabled Keller to create a highly efficient design, with the optimum number and spacing of refrigeration pipes. With such a large part of the cost going into the drilling, it was vital to get the specifications just right.

In total, 49 pipes were installed into precisely drilled and aligned holes on 3ft centres around the perimeter of the launch shaft, with nine in the middle, to depths of 150ft. The pipes were then used to circulate a calcium chloride brine, chilled to -30C to an exact flow rate for six weeks.

"The sequencing was more complicated than a typical ground freezing project," said Shawn Coughlin, Keller senior project manager. "The design was based on freezing the centre and perimeter pipes simultaneously. Then, once the bottom was frozen to the right temperature, we removed the interior pipes to make excavation easier. The perimeter pipes were sufficient to maintain the freeze.

"It's challenging to strike a balance between adequately freezing the centre of the shaft and not freezing it so much that it's difficult for the client to dig through. That means insulating the upper zone, while ensuring the bottom is colder."

A team that is second to none

After successfully completing the launch shaft in the second half of 2018, Keller returned in November of last year to carry out the same work for the 102ft-deep, 30ft-interior-diameter receiving shaft.

This time, 39 pipes were installed around the perimeter with seven in the centre. In addition, 24 pipes were installed in a grid pattern to freeze a break-in block for the tunnel boring machine. Freezing is now complete and overall, the project has been a significant success.

From the spacing and number of pipes, to understanding the soil conditions and the accuracy of the drilling, "there are so many components to ground freezing and such little room for error," said Sopko. "We set ourselves apart by carrying out our own testing and modelling techniques, but the success of ground freezing projects comes down to having the right team. The experienced and qualified people we have at Keller are second to none, and work of this complexity simply couldn't be done without them." 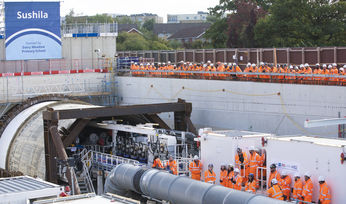