The changing face of drill and blast

To match the high demand for natural stone grains in the current boom in mainstream construction, some operators who normally drill and blast on their own are buying additional drill metres through service providers. In the light of this development, the latter are also increasing their capacities. That is just what German drilling and blasting company Klaus Berge did when it invested in a new Sandvik drill rig, Ranger DX900i, becoming the first in the country to operate the completely new type of drill rig. 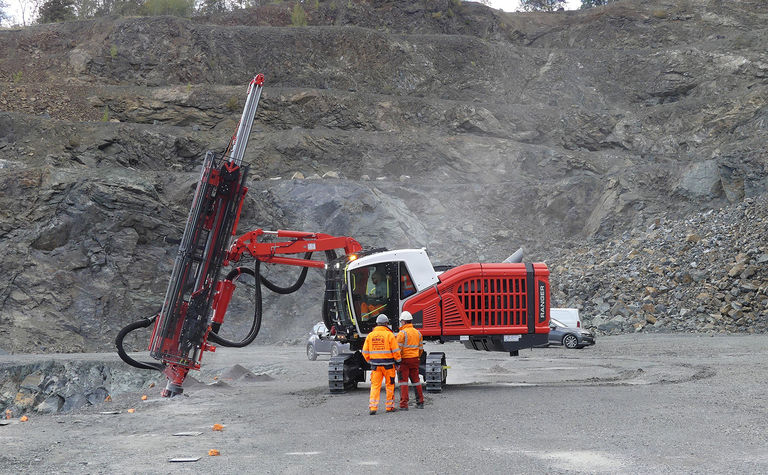 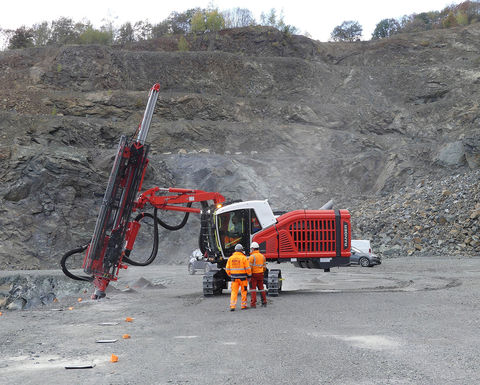 It was not long ago that Germans came into contact with the new Sandvik top hammer drill rig - the Ranger DX900i. One of the first pre-production models was presented at the Sandvik stand at Steinexpo 2017 as a novelty prior to the official market launch. On that occasion, potential operators were impressed by the 290° working radius of the machine, covering a drilling area of 55m². With fewer transfer operations, fixed drill grids can be drilled faster, more precisely and more safely.

New and powerful RD920 series rock drills with outputs from 21 to 27kW are available for the drill rig, which is equipped with Sandvik GT60 drill steel for straight holes in diameters from 92mm to 127mm.

In combination with a fuel efficient 210kW engine, it is one of the most powerful and economical surface top hammer drill rig in its class.

"What is special about this powerful type of drill rig is that even difficult, narrow and very uneven drilling fields can be drilled, which is not possible to the same extent with any other rig," said Klaus Berge, a transport, drilling and blasting contractor from Alheim, Hesse, Germany.

This aspect, in combination with the strong drilling performance, was decisive for him and ultimately pivotal in the purchase of a Ranger DXi drill rig. "During the fair visit, Olaf Gruner, German sales manager for Sandvik drilling equipment, gave us detailed advice and information, including on the advantages of the proven iTorque control system," recalled Berge. This control system brings important advantages to the drilling process, such as the automatic adjustment of drilling parameters for high drilling accuracy even on difficult rock types. In this way, optimum drilling performance and drilling accuracy are achieved, while at the same time minimising drill steel wear.

Impressed by the possibilities offered, Klaus Berge has invested in Ranger DX900i. It certainly is not every day that the owner of a small company in Germany is the first to buy a premier drilling unit from a completely new series. But Berge, who has been drilling and blasting since 1989, saw a good reason for this: "We have been using the predecessor of the new model, the Ranger DX800, for the past six years and are completely satisfied with it. That's why we wanted to rely on a model in the Ranger series again for our upcoming supplementary purchase."

After the first few days of operation, Berge had witnessed the fulfilment of another promised advantage: "The construction of the new Ranger DX900i is different from its predecessor. That means it is, once again, noticeably more stable. It has also been confirmed that the new rock drill is stronger and, accordingly, strikes perfectly. For that reason, and also because more flushing air is available, it is more economical to drill."

The real use of the intelligent system equipped with Industrie 4.0 docking stations will only be revealed in practice over time. After the thorough four-day supplier training right at the start of the operation, there will be a second training four weeks later, where all unanswered questions concerning the drill can be clarified together with the manufacturer's instructors.

Klaus Berge's references are exemplary. In addition to heavy haulage and drilling jobs, the company also provides complete services for the operation of quarries. Nevertheless, no matter how much experience a company has racked up, thoroughness is essential to rapid operational success and safety when training on completely new devices. For this reason, Klaus Berge's personnel were trained on the newly delivered Ranger DX900i in September 2018 at Hartsteinwerke Schicker OHG's Diabas quarry in Kupferberg. 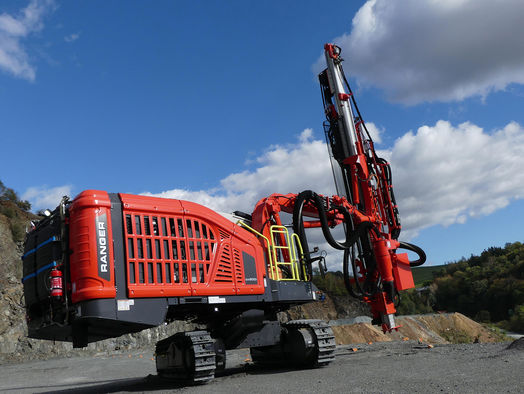 The company currently operates four quarries in northern Bavaria - in Bad Berneck, Kupferberg, Stadtsteinach and Rugendorf. While extraction and processing have so far largely been handled by the company's own workforce, since the acquisition of the fourth site and due to the currently very high demand, the integration of additional drilling service providers has been necessary.

The site is located 270km away from Klaus Berge's headquarters, beyond the usual deployable radius of the Hessian supplier's external drill metre. However, with demand and supply fitting together just perfectly, exceptions are ever present in such cases.

Klaus Berge operator Andreas Soldan, Sandvik sales manager Olaf Gruner and Sandvik instructors Ralf Müller and Raoul Düsing were involved in the preparations for the first deployment of Ranger DX900i. A key role was also played by Pauli Lindholm, a service technician from the Sandvik factory in Tampere, Finland. With his first-hand knowledge of the machines, Lindholm has the most insight into Ranger DX900i. His task is to 'train the trainer' because even his German instructor colleagues become familiar with the newcomer for the first time in use.

For such situations and to ensure the future transfer of knowledge, the redesigned, ergonomic and comfortable ROPS/FOPS certified cabin of the technologically advanced drill rig includes an instructor's seat behind the driver's seat. 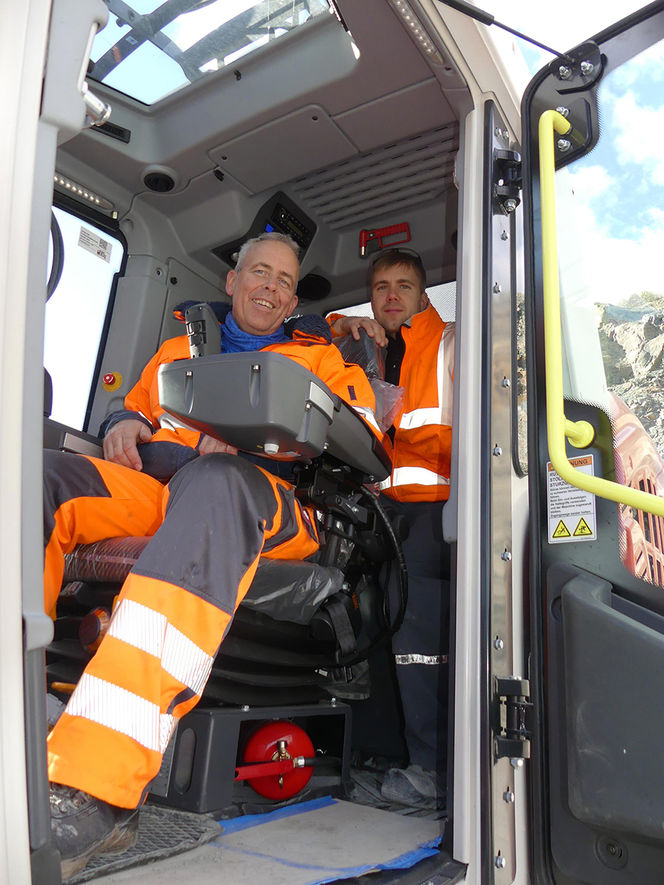 Thanks to a collaboration with the Finnish Technical Research Centre VTT the noise levels in the new iCab-cabin have been brought to a minimum level - the instructor explains the new user interface and control panels of the touchscreens. The user-friendly joysticks are handled correctly by all Ranger DX900i newcomers right from the first try in the test run. Instructor Lindholm, behind the machine's operator seat, is visibly satisfied with the result even at this early stage. Just a few days later, operator Andreas Soldan has also established a trusting relationship with Ranger DX900i and appreciates its advantages - at least as far as the hardware is concerned. The hydraulic, self-propelled surface drill rig with a nimble automatic rod changer will do great in terms of visibility during production drilling in quarries, that much is already clear. It will also earn points if the Klaus Berge crew, on behalf of construction companies, is involved in infrastructure measures with drilling and explosive equipment. 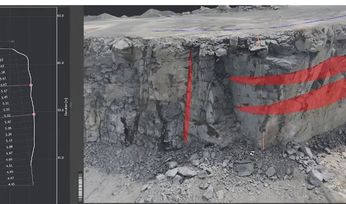 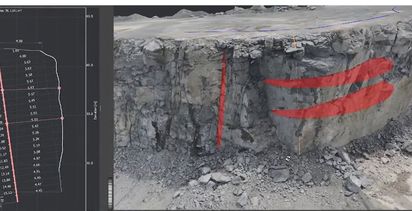