Alba Mineral Resources has announced that its drilling contractors have mobilised to site at the Clogau Gold Mine in north Wales, UK. 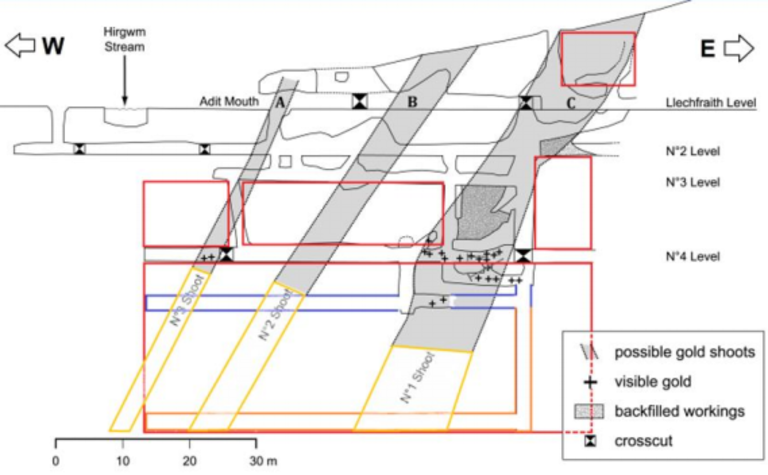 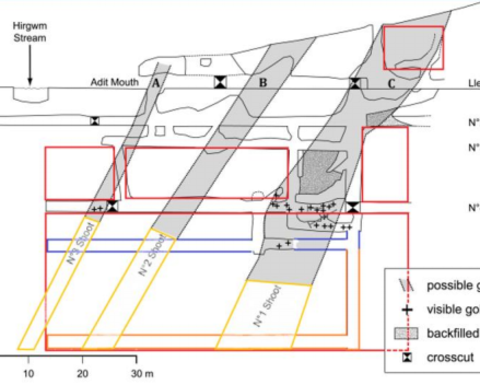 Long-section of the Llechfraith Mine area, showing three reported gold shoots and the location of areas of reported visible gold

What is believed to be the first-ever exploration diamond drilling programme at the historic Clogau Gold Mine will commence imminently.

The maiden drilling programme at the Clogau Gold Mine will target extensions to the Llechfraith mine area. The area is reported to have first been opened in 1862, ceasing production in 1865. Most recently, limited mining was undertaken between 1983 and 1987 with visible gold being reported adjacent to westerly-dipping greenstone intrusives along the lowest No. 4 Level, which is approximately 30m below the main Llechfraith Adit entrance.

George Frangeskides, executive chairman, said: "I am very pleased to announce the start of a diamond drilling programme at the Clogau Gold Mine, which to the best of our knowledge is the first such programme in the long and illustrious history of the mine.

"During the previous periods of operation, the Clogau Mine owners limited their efforts to chasing and mining out visible gold-bearing quartz veins within the host Clogau shales. By contrast, Alba's approach is multi-faceted, and the Llechfraith mine area is a prime example of this. It was last mined in the 1980s, and visible gold has been reported in two out of three ore shoots within the mine area. This, when added to the results of our soil sampling programme which confirmed a strong gold anomaly above the Llechfraith workings, marks out Llechfraith as a strong prospect for the discovery of unexploited gold zones.

"While this is a fairly short drilling programme, primarily designed to test the structural model, if that model is confirmed it will provide us with the necessary support to then move onto infill drilling and bulk sampling and processing at Llechfraith.

"The strong recovery in the gold price, which recently hit a five-year high of more than US$1,500 per ounce, allied to the premium prices which Welsh gold fetches on the open market, underpins our belief in the Clogau Gold Mine as a key prospect for significant future revenue generation."

A total of three gold shoots were recorded at the Llechfraith mine area in the 1980s. The No. 1 Shoot, which was mined between 1984 and 1987, is reported to have been traceable from the surface to 40m down-dip to the No. 4 Level, being the deepest level of the Llechfraith mine. Visible gold, by its nature being high-grade, was reported within the No. 4 Level. Mineralisation controls in this area are not certain but No. 1 Shoot is reported to plunge to the south- 3 east at a dip of 65 to 70 degrees with a pitch to the south-west. No.1 Shoot is thought to relate to a split in the lode with gold mineralisation reported to lie within the hinge of the split.

The recent infill soil sampling programme completed by Alba included a line of samples traversing the Llechfraith mine area with the soil line orientated along the axis of the dominant anticline fold within the area.

A strong anomaly can be observed above the Llechfraith workings. Twelve samples above 0.005g/t Au averaged 0.023g/t Au, with the highest grade being 0.13g/t Au. It should be borne in mind that as these are gold-in-soil grades, by their very nature these grades are not expected to be high-grade. The significance of the presence of low-grade gold anomalism in the soils is that it is a marker for possible significant gold deposition in the hard rock structures situated immediately beneath the soils.

Given the anticline fold structure present at Llechfraith, the Clogau shale within this area is potentially up to 200m thick and is considered a high priority target area for future mining activities. This, together with the fact that access to this target is good, is why this target has been selected for the maiden drilling campaign at Clogau.

At present, three to four diamond drill holes are planned, targeting extensions to the reported Llechfraith ore shoots, for ~200-300m of drilling. All holes will be drilled from within the Alba's freehold land situated close to its mine sheds and the Llechfraith Adit entrance.

The primary objective of the drilling will be to collect important geological and structural data to improve the understanding of this particular target area. Given the nature of the geological setting at Clogau, where gold has previously been found within narrow quartz veins at the contact with greenstones, combined with the modest amount of drilling that is planned to test the structure at Llechfraith, it is not expected that the drilling will necessarily intersect gold mineralisation.