The use of sonic drill rigs by Earth Drilling is paying dividends in the Athabasca oil sands in Canada reports Nancy Argyle. 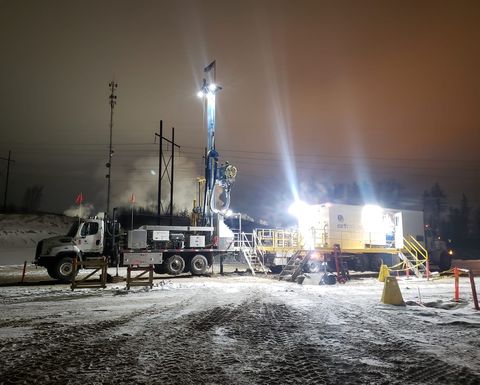 It is hard to imagine the scale of the Athabasca oil sands - a deposit of bitumen so large that it rivals small countries.

Located in northern Alberta, Canada, the oil sands are ancient, massive and mostly buried under waterlogged muskeg and positioned on top of a mainly flat limestone base. At 54,900 square miles (142,200km2), these so-called ‘tar' sands are roughly the same size as Greece.

Bitumen deposits can be found around the planet and, as archaeologists have discovered, they have been used by humans for a long time. We now know that Neanderthal man slathered bitumen on tools to bind them together while, later on, the Egyptians and other societies in regions like Mesopotamia used it in building construction thousands of years ago.

In Canada, it was the year 1778 before a European first set eyes on the Athabasca oil sands, but, long before white fur traders made their way into the area, bitumen had been oozing out of fissures and along river banks and the ever-resourceful indigenous Cree and Dene peoples had learned to mix it with spruce gum to waterproof their canoes.

It was more than a hundred years later, in 1884, before Canadian government researchers recognised the oil sands as having the potential for "an inexhaustible supply of fuel". Finally, in 1923, commercial development began with the first drilling efforts. At the same time, halfway around the world, early research had begun on sonic drilling technology, but it would take nearly another 70 years of effort before Canadian engineer, Ray Roussy would patent and commercialise modern sonic drilling technology.

Earth Drilling has five sonic drill rigs working non-stop in the oil sands, 24 hours a day, seven days a week, involved in everything from grain size analysis to core sampling to the installation of vibrating wire piezometers. "We also help model the mine before it's actually mined so the land can be reclaimed afterwards," says president and owner, John Paul (JP) Wegleitner.

Based in Calgary, Alberta, Earth Drilling was founded in 1976 and today has about 120 employees. Out of a fleet of 25 drill rigs, Earth Drilling has nine sonic machines - five of which are deployed to the oil sands.

"Initially, Earth Drilling had purchased some sonic rigs that were not equipped with the original patented technology," Wegleitner says. "It was a mistake and we've now replaced seven out of the nine rigs with Ray Roussy's technology and we will be replacing the last two in the near future.

"Since we did that, we've seen an increased demand for sonic drills in the oil sands and, in fact, we replaced one contractor who was running an inferior sonic rig there.

"The mine we're at right now is very happy with the performance they're getting from our sonic rigs," he adds.

So far, Earth Drilling is the only company in the oil sands using Roussy's technology, which is basically maintenance-free and allows the rigs to run almost non-stop except for some standard upkeep about once a month. "Incredibly, one Roussy drill head on a rig working at the oil sands has more than 14,000 oscillating hours," says Wegleitner.

Although sonic drilling technology is now widely known, a lesser-known fact is that not all of the sonic drills in existence carry the patented Roussy sonic drill head. When Wegleitner first bought Earth Drilling in 2012, he started looking closely at the sonic rigs he had acquired. "I did some homework, asked people and researched what was out there. It was then that I realised we had to switch over to the original technology… the copycat technology was just not as good or reliable."

Despite the extremes in weather and abrasive sand formations, which are hard on the equipment, Wegleitner says he believes the use of sonic technology in mining will only continue to grow "as long as people buy the right sonic drill. Otherwise, if they don't, it hurts the industry when clients have a negative experience."

Most recently, Earth Drilling purchased a brand new SonicSamp drill which contains the Roussy Sonicor drill head. "We took delivery in late December 2019 and expect to send the new rig to the oil sands shortly."

Roussy's Sonicor drill head produces the fastest drill rigs on the planet - delivering three to five times faster drill speeds by using a patented mechanism for rotary motion and oscillation that causes a high-frequency force to be superimposed on the drill pipe.

Thanks to this combination, the drill bit physically vibrates up and down, in addition to being pushed down and rotated. These three forces combine to allow it to "buzz" easily through mixed soils, solid boulders and bedrock.

The drill bit is hollow, ring-shaped and equipped with carbide inserts (unless equipped with a down-hole hammer or full-faced bedrock bit). The attached hollow drill pipe acts as a hole casing (another time-saving advantage), through which compressed air, water or drilling mud can be injected. As the sonic rig drills, the vibrations pulverise the surrounding rock into particles that are then flushed back to the surface.

More than 35 years ago, when Roussy's sonic drilling technology first entered the marketplace, it was to a somewhat bemused and sceptical reception.

"Not that long ago, we would be accused of exaggerating at tradeshows when we told people how fast a sonic drill could bore," says Roussy, president of the Sonic Drill Corporation and Sonic Drilling Ltd. "People thought it was a gimmick… even engineers had a hard time understanding how it worked until they saw one in action."

In those early days, drillers were sceptical but, when they heard that a sonic rig was in town, they often took time out to stop by and see if the hype was true. It was and the rest, as they say, is history.

Today, Roussy's patented sonic drilling technology is used across six continents and in almost every application imaginable but, of all its uses, it has earned a reputation as a rescue rig - capable of drilling through impossible soil conditions that would jam up rotary rigs or make some projects unfeasible.

With four awards to date and a lifetime devoted to the successful development of sonic drilling, Roussy says he is proud to see how many different countries now use his sonic rig. Indeed, the long list of projects is diverse and exciting - from diamond exploration in Africa to the oil sands in Canada to pavement melting systems in Japan.

"The users actually deserve a lot of credit… they've taken my technology and run with it." 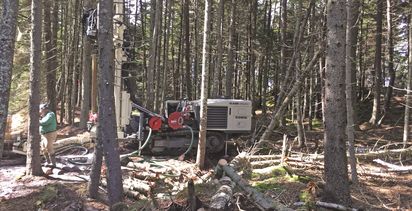