Bryah Resources Ltd has completed the maiden mineral resource estimation at the Tumblegum South gold-copper prospect, located within its Gabanintha project, approximately 40km south of the town of Meekatharra in central Western Australia. Bryah Resources has completed the maiden mineral resource estimation at the Tumblegum South Gold-Copper Prospect, located within its Gabanintha Project

Commenting on the estimation, MD, Neil Marston said: "This maiden mineral resource estimation is an excellent outcome for the company. We have identified multiple zones of shallow gold mineralisation, with down-dip and along strike extension potential. We are delighted with the overall grade and tonnage for a maiden resource and, given a buoyant outlook for gold, indications are that the prospect has the potential to profitably support open pit mining and trucking to an off-site processing plant. With the current high gold price, there is excellent potential for the company to monetise the prospect, either through an outright sale, or some other form of commercial development. We have commenced a formal process to solicit interest in the Tumblegum South Prospect and intend initiating the mining lease application process immediately."

Seven holes were drilled by Yellow Rock Resources Ltd (YRR) (re-named Australian Vanadium Ltd) during 2013 for 1,571m, and 42 holes were drilled by Bryah during 2017 and 2019 for 4,069m. The project area is immediately south of open pits of the Gabanintha Gold Mine which were mined between 1987 and 1992 by Dominion Mining Ltd in a joint venture with Southern Ventures NL and Black Swan Gold Mines Ltd.

Drill spacing at Tumblegum South is generally on 25m centres, on 25m spaced lines, with variable drill directions, due to the presence of two main structural orientations. There is a close-spaced set of northeast-southwest gold-bearing structures, in addition to two gold-bearing structures that are oriented east-west to southwest-northeast.

A conceptual thrust model has been developed that aligns with truncations of magnetic features at Tumblegum South. An aeromagnetic survey flown in 2017 was used to form this interpretation. Dominantly the lithologies are ultramafic with some dolerite intrusions and lesser basalts. Geological modelling was completed using Leapfrog Geo. Geology units were numerically modelled using nickel assays as there was a comprehensive dataset for nickel, clearly showing four different populations (basalt, gabbro/dolerite, basaltic komatiite, serpentinised peridotite from low to high nickel). Previous reports from Dominion Mining Ltd prepared during mining of the Gabanintha open pits to the north, YRR and Bryah geologists also note that gold is hosted in two main styles; Biotite-Quartz-Carbonate+/-Pyrite+/-Chalcopyrite lode within talc-carbonate altered ultramafics or at the contact of ultramafic and dolerite; and a quartz vein system within the intrusive dolerites or through the massive basalt units marginal to sheared ultramafics.

The presence of abundant biotite alteration in some mineralised intersections suggests there is a potassic alteration component to the gold system in addition to vein hosted gold-copper. 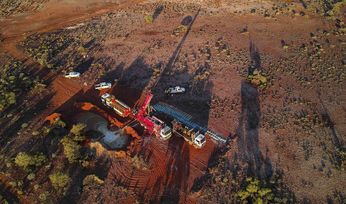 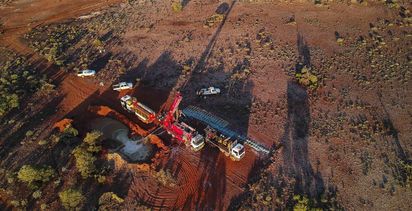