Canadian mineral exploration specialist, Palladium One has reported on its expansion of its nickel-copper project at the Kostonjarvi reservation in Finland 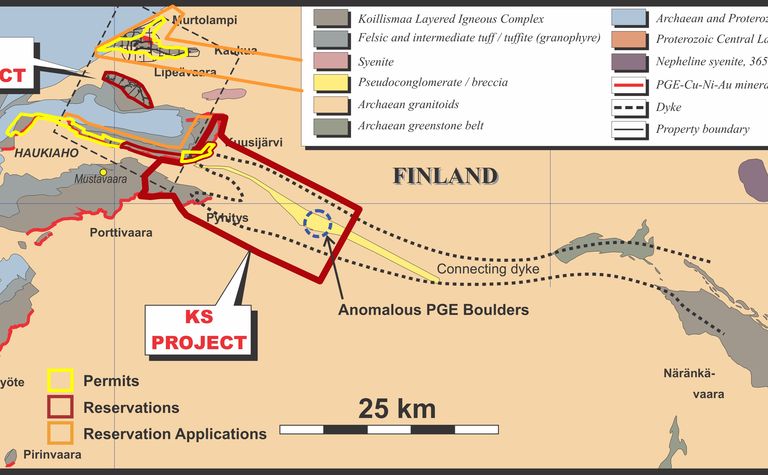 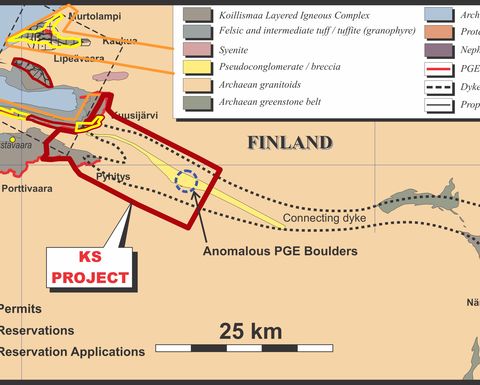 Palladium One Mining Inc., a platinum group element nickel-copper exploration and development company, has received approval from the Finnish Mining Authority for a ~20,000-hectare reservation at Kostonjarvi (KS), which is adjacent to its Flagship Läntinen Koillismaa (LK) project in Central Finland.

The KS reservation covers a large buried gravity and magnetic anomaly that is interpreted to represent a buried Feeder Dyke to the Koillismaa complex which hosts the palladium dominant, LK PGE-nickel-copper project (see figure 1).

While the LK and KS projects are contiguous, the targets are very different: The LK project is an open pit style, with disseminated sulphide mineralisation along the prospective basal unit of the Koillismaa complex, with similarities to Platreef type deposits. Whereas the KS project target is underground, high-grade massive sulphide, in the feeder system (Feeder Dyke) of the Koillismaa complex, similar to a Norlisk, or Voisey's Bay type deposit (see figure 2).

"KS is 100 per cent owned, royalty-free, of district-scale, and has been the subject of extensive academic research. Just as with our palladium dominant LK project, KS is under-explored, notably where it connects to the Koillismaa complex. The KS exploration targets are ‘traps' in the Feeder Dyke with the potential to host massive sulphide accumulation," said Derrick Weyrauch, president and CEO, Palladium One.

"Holding costs for KS are zero until the reservation is converted into an exploration permit. As at March 31, 2020 the company had cash and equivalents of US$2.6 million (unaudited), estimated net-working-capital of US$2.5 million (unaudited) and no debt. Figure 2. 3D model of the buried connector dyke (modified from Salmirinne and Iljina 2003) and schematic long section of the Voisey's Bay deposit

The buried Feeder Dyke creates an impressive gravity (figure 3) and magnetic (figure 4) anomaly suggesting a large accumulation of ultramafic cumulate rocks, and hence a significant amount of magma flow through the conduit system.

The Feeder Dyke begins at the ultramafic Narankavaaara intrusion and then dives to a depth of 3 - 5km before coming near-surface again where it is interpreted to connect to the Koillismaa complex. Substantial academic effort, including magnetic, gravity, and seismic studies have been directed toward modelling the buried Feeder Dyke, yet very little exploration has been conducted. The KS project covers the western one-third of the buried Feeder Dyke anomaly where it has been modelled to shallower depths and is interpreted to eventually connect to the Koillismaa complex (Figure 1, 3 and 4). 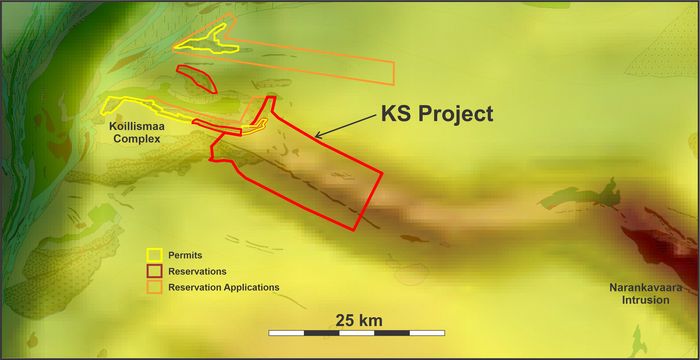 An important marker unit of the Feeder Dyke is the presence on the surface of a pseudoconglomerate directly above the gravity high, which consists of sheared and intensely thermally assimilated orthogneiss (Figure 5). This unit is interpreted to mark a pre-existing Archean structure which the Feeder Dyke exploited and the pseudoconglomerate is a result of hydrothermal fluids escaping upwards from the magma below. The structure is mapped to within less than 1km of the Koillismaa complex and may mark where the Feeder Dyke connects to the complex. 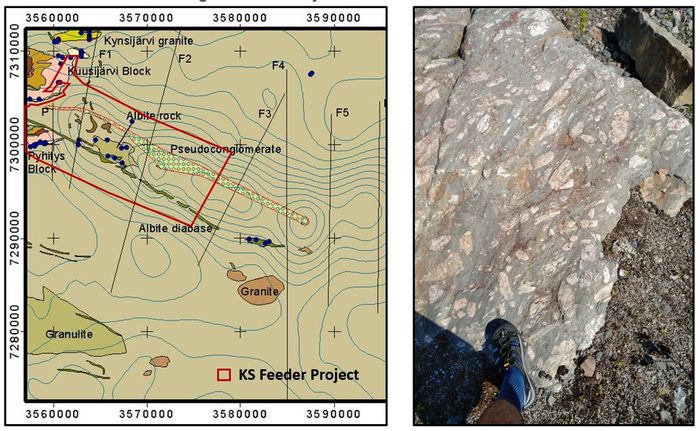 Neil Pettigrew, vice president exploration, said: "The KS project is a unique opportunity to leverage robust academic studies to discover massive Cu-Ni-PGE sulphides contiguous to our existing flagship LK project. The tenor of the LK project's disseminated sulphide mineralisation is very high, if massive sulphides can be located with similar tenor, then the in-situ value of this mineralisation could be very substantial."

In addition to the KS project, the company has applied for two additional reservations Kaukuanjarvi and Haukiaho North. Preliminary results from this winter's IP survey, and a review of regional airborne geophysics, indicates an east-west magnetic trend which may be an extension of Kaukua-style mineralisation into an area of heavy overburden, beyond the mapped Kaukua area mafic-ultramafic rocks. As such, the company has applied for a 9,100-hectare reservation (Kaukuanjarvi) (Figure 6). In addition, Palladium One has also applied for a second 2,140-hectare reservation (Haukiaho North) covering the down-dip extension of the Haukiaho mineralised trend (Figure 6). Reservations are granted for one to two years periods and have no fees until they are converted into exploration permits.

Palladium One has also reported that the Salmivaara 2-11 exploration permit has gained legal force. The company now has three permits that have cleared the appeals process, and enforcement decisions have been granted on another five permits thereby enabling exploration to be conducted on eight permits. The company holds nine permits (3,845 hectares), three reservations (20,991 hectares), and two reservation applications (11,235 hectares), for a total of 32,226 hectares.

A Finnish geothermal specialist has received €3.3 million to invest in new technology 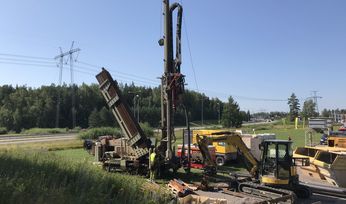